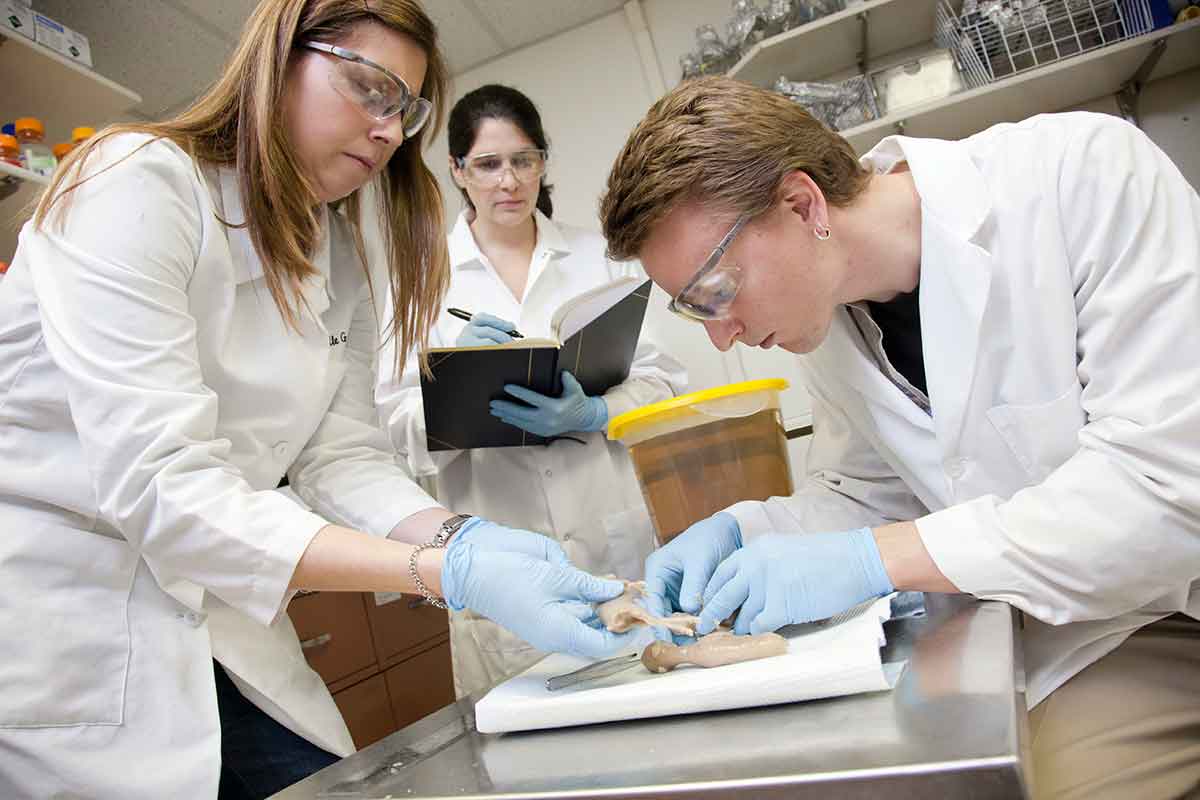 Researchers at the University of Illinois examine a deer fetus for evidence of chronic wasting disease.
Photo: Wikimedia Commons

More than a century ago, unregulated commercial harvest put much of Pennsylvania’s wildlife on the brink of blinking out.

These days, disease is the threat

White-nose syndrome has reduced populations of some bat species by 99 percent. West Nile virus continues to hammer ruffed grouse and perhaps other birds. Chronic wasting disease is spreading through the white-tailed deer herd.

“At no time in history has wildlife disease posed more problems for wildlife and its conservation,” said Bryan Burhans, executive director of the Pennsylvania Game Commission.

A new partnership aims to tackle that.

The Pennsylvania Wildlife Futures Program teams the commission with the University of Pennsylvania’s School of Veterinary Medicine, known as Penn Vet. Together, the two entities plan to monitor, study and manage wildlife in the face of disease in the most comprehensive way ever.

And, just as importantly, they say, tell the public how those efforts are going and what needs to be done.

Consider it a clearinghouse of sorts. The program – with a database in the works – will take information collected in the field and house it in one place. There, scientists and researchers can see where each part fits into the larger picture, said Matthew Schnupp, director of the commission’s bureau of wildlife management.

That will allow for faster and better response across multiple agencies and with the public, said Julie Ellis, Penn Vet’s senior research investigator.

She called it “an investment in Pennsylvania’s wildlife heritage.”

It’s a costly one.

The commission is paying Penn Vet $10 million over the next five years. That makes it one of the agency’s largest, most expensive programs.

Some of that money is going to personnel. Penn Vet is hiring 12 people – wildlife veterinarians, pathologists and the like – to study wildlife disease. One will be housed at the commission’s Harrisburg headquarters.

Some of it is going for equipment.

Schnupp said the agency purchased tools needed for testing tissue samples for wasting disease. It is dedicated specifically to Pennsylvania.

That will have tangible, immediate benefits, Burhans said.

Hunters who submit deer parts for testing can expect results in seven to 10 days, Before, it took weeks or months, Burhans noted.

All that takes money. But there’s no getting around it in a world where no one can predict what “the next big thing” in wildlife disease will be, Schnupp said.

“So we want to build something that will enable us to handle anything that comes our way, disease related, in a much more sustainable and reliable way. That’s the vision of this program,” Schnupp said.

“New diseases are going to come,” Burhans agreed. “We’d rather be at the front end of those diseases rather than dealing with the consequences as they build.”

But veterinary training focused specifically on wildlife is a growing field of training, Ellis added. This program will tap into that expertise, she said.

“This will allow not only for more thorough disease documentation and investigation as well as management. But it will allow (commission) biologists to spend less time dealing with disease issues and more time focusing on managing wildlife populations,” Ellis said.

“Our overarching goals are to enhance our ability to coordinate disease surveillance and response across agencies, our hunting community and the general public.”.

Schnupp, credited as the man who initiated this project, said Cornell University and the New York Department of Environmental Conservation do some of what the Pennsylvania Wildlife Futures Program intends to. But that’s on a much smaller scale.

He’s unaware of anything like this program, of this size, anywhere in the country.

If there’s one thing that really sets this program apart, though, Schnupp said, it’s in messaging.
Most research efforts are “project based,” he said. Typically, researchers collect data, analyze it, then turn results over to agencies like the commission “and say good luck.”

In this case, researchers – “content experts,” he called them — will play a public relations and education role. Schnupp said they will help the commission explain to lawmakers, hunters and the general public what disease threats exist, what management options are available, and what steps need to be taken.

“I think that’s an important distinction between what we’re doing and what has been tried in the past,” Scnupp said. “And why I think this will be successful.”

Burhans agreed. There are some hunters who “don’t want to believe” what the Game Commission has to say, especially in regards to chronic wasting disease, he admitted. And there’s lots of misinformation out there, he added.

Indeed, this past winter protesting hunters managed to shut down plans by the commission to shoot hundreds if not thousands of deer in an area of southcentral Pennsylvania where wasting disease is rampant. The idea was to see if such a policy might stop or slow spread of the disease.

But it never got off the ground. Instead, the commission is spending the next year talking to the public. Only then will it release its anticipated and now overdue CWD response plan.

He called its formation a necessary “paradigm shift” in managing wildlife.

Schnupp said he hopes it lasts long beyond the original five-year contract, too. In time, in fact, he envisions it incorporating data from other states, as diseases “don’t respect state boundaries.”

That program won’t necessarily lead to cures for disease, Burhans said, though that would be ideal. Rather, it could identify knowledge gaps, suggesting where the commission is or isn’t collecting enough data, for example.

And most importantly, he said, it will allow the commission and partners like Penn Vet to tell the public – and in particular hunters, “our friends” — what appropriate management steps must be taken, on CWD and other diseases.

“One thing we’ve learned from other states with chronic wasting disease, if you don’t engage the public you virtually seem to have no chance of success in the long term,” Burhans said.