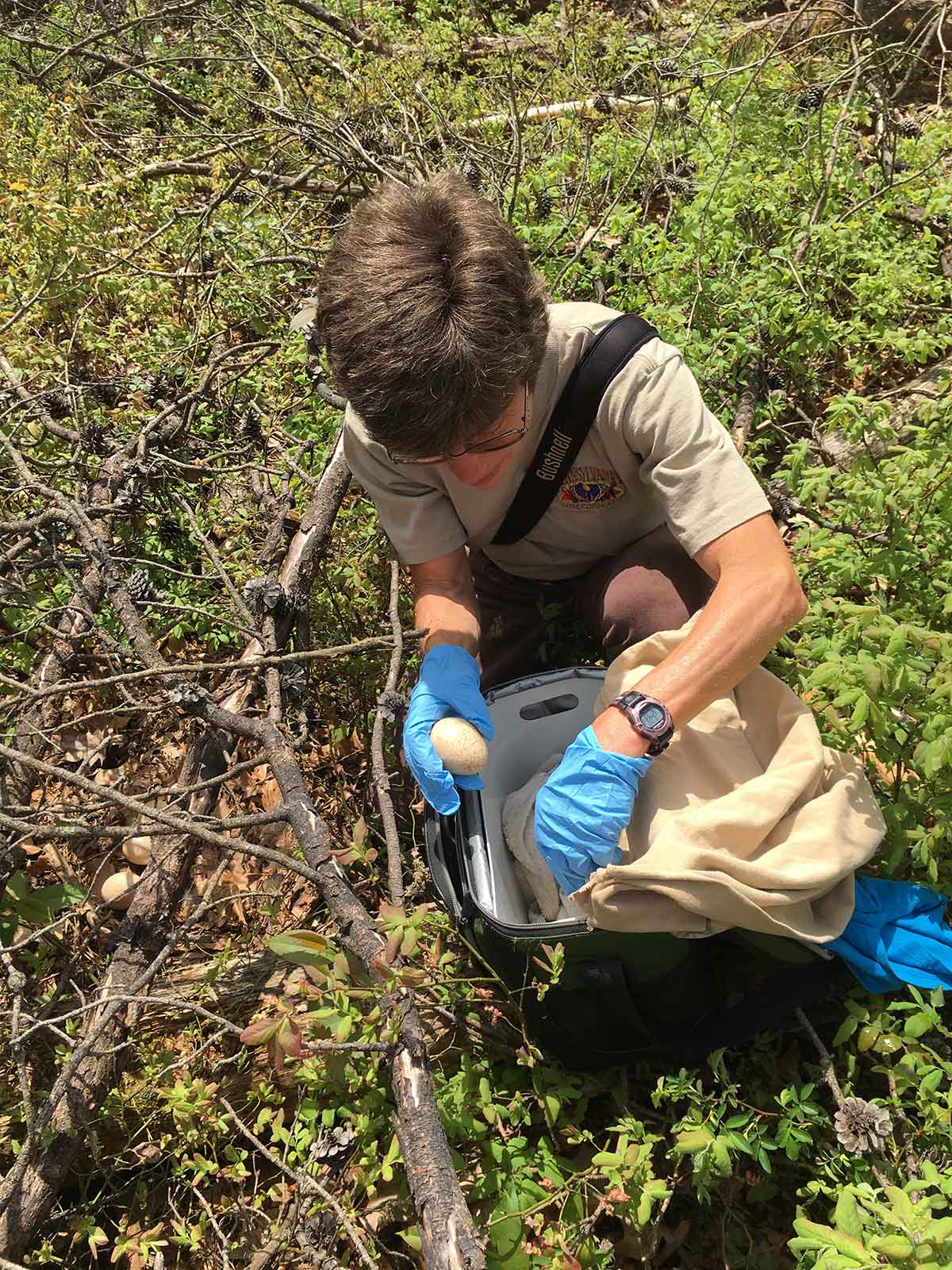 How would this be for a twist.

Across the country, hunters can pursue turkeys twice a year, in spring and again in fall. Yet, perhaps, the most dangerous time for the birds might be late summer.

Biologists, foresters, hunters and other volunteers collected 131 turkey eggs from nests across Pennsylvania this spring. They drove them to the Southeastern Cooperative Wildlife Disease Study, a biosecure facility at the University of Georgia, to be hatched, inoculated with West Nile, and studied.

That work began this week.

Sixty-six poults, or young turkeys, successfully hatched. Twenty-four went into the facility on July 2, at 4- to 5-weeks of age. After acclimating to their new surroundings for a week, they will be given West Nile.

Two weeks after that, researchers will euthanize them and examine tissue samples.

The remaining poults will go through the same process later this summer, at 15 to 16 weeks old.

“We’re trying to see if the younger poults are potentially more susceptible to West Nile Virus than the older birds,” said Melanie Kunkel, the veterinary diagnostician and doctoral student working on the project.

Younger birds don’t yet have fully developed immune systems, he said. By week 10 or so they do.

“But that’s when West Nile Virus is the hottest on the landscape. That’s when all the mosquitoes are out,” Blake said.

That the research is going on at all is a product of two things.

First, there is growing evidence that West Nile is impacting ruffed grouse populations.

Lisa Williams, grouse biologist for the Pennsylvania Game Commission, documented that in years when mosquito populations spike, grouse populations plummet. Now other state wildlife agencies are investigating the same correlation in their own declining grouse populations.

Meanwhile, additional research shows the impact West Nile is having on sage grouse populations in the West.

Second, in Pennsylvania and many states, turkey populations declined from the historic highs seen 10 to 15 years ago.

Today’s numbers — while still good — could just be the “new normal,” said Mike Peters, game bird biologist for the West Virginia Division of Natural Resources. Back then, many state agencies were still transporting birds into new areas to jumpstart flocks.

“There’s a theory that when you have a new population, and it doesn’t matter if it’s ants or birds or mammals, when you first introduce a population it will exceed the landscape’s carrying capacity,” Peters said. “And then they’ll come back down to what the carrying capacity should be.” 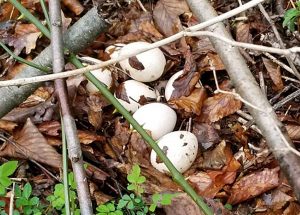 Cold, wet springs make it difficult for young turkeys to survive. And, Casalena said, the Northeast definitely experiences wetter springs, with more frequent, more intense rain events, now than in the past.

But previously, turkey reproductive success rose and fell every few years, with peaks and valleys based on conditions, Casalena said. In Pennsylvania it peaked in 1999, the year West Nile was accidentally introduced into the United States.

Since, and over the last eight years in particular, it’s been largely poor, at least in comparison to the past.

“So it really begs the question, is West Nile Virus one of the factors effecting their productivity?” Casalena asked.

“This has really been a driving question for us, now that we have the results from the grouse study. Because grouse are pretty similar to wild turkeys.”

Scientists did one study looking at the disease in domestic turkeys in the early 2000s. It found they were not susceptible to West Nile.

No one’s looked for a link between wild turkeys and the disease, Blake said.

But he said there’s no doubt something is going on with turkey populations.

“From the Northeast down to the Southeast, and Georgia across to Arkansas, different levels of decline have been noticed. Some have been more severe than others,” Blake said.

This wild turkey study, he added, is an attempt to “connect the dots” and see if disease is a culprit in that.

Nicole Nemeth, an assistant professor and director of diagnostic service at Georgia’s disease study, said that once the poults are euthanized, she and Kunkel will examine tissue samples under a microscope.

They’ll look for dead or injured cells, and in particular what parts of the body – heart, brain, muscles – they might be in.

How dramatic the damage might be remains to be seen.

“So that’s kind of the interesting thing about West Nile. There’s nothing definitive you would expect to see,” Nemeth said. “We’re looking for anything subtle.

“But that can vary in different bird species. So maybe there’s something different in turkeys that we aren’t expecting.”

Results could be available in six to eight months, she said.

If they show that West Nile is hurting turkey numbers, “that would answer a lot of questions,” Casalena said.

There’s no way to immunize wild turkeys. And spraying to control mosquitoes across an entire state would be “insanely expensive,” Blake said.

Generally, the best way to help wildlife weather disease or any sort of storm is to provide as much good habitat as possible, said Mark Wiley, forest game bird biologist with the Ohio Division of Wildlife, where West Nile is “on the radar” despite a steady population.

“You help that population persist in the face of whatever new threats it faces,” Wiley said.

With grouse, Williams’ research determined that the birds encounter fewer mosquitoes and subsequently less disease at elevations of 1,500 feet or so. Going forward, the commission should focus on creating grouse strongholds on higher ground, she said.

“For turkeys, they’re distributed everywhere. We don’t really have a magic wand for management of turkeys,” he said.

The only way to really deal with the disease, Casalena said, might be to limit hunting.

With turkeys, changes might be more regional, Casalena said. She might recommend shorter fall turkey seasons in wildlife management units with high incidences of West Nile and marginal habitat and poor reproduction in particular.

But it’s a bit early to talk of that, she said. First, she’s eager to see results of this study.

Others are, too, and with good reason. Biologists across the country could use the information gathered as a baseline for their own turkey populations, Nemeth said.

“We have a lot of eyes on us right now,” Blake said. “A lot of people are interested in this for making management decisions.”

Peters agreed, saying wildlife agencies from Virginia to Maine are talking about West Nile and turkeys.

Fortunately, it should take just this one batch of poults to get answers.

“Because if wild turkeys are susceptible, they’re susceptible,” Casalena said. “So that’s the nice thing about this study. It’s either a yes or no answer across the board.”

Specifically, select grouse hunters were equipped with what are essentially swabs. They coated them in the blood of any grouse they killed, then submitted that to the Game Commission.

Now, they may ask turkey hunters for similar help.

Melanie Kunkel, of the Southeastern Cooperative Wildlife Disease Study at the University of Georgia, is developing a pilot turkey hunter-West Nile program.

There’s not a lot of money in place to do the research yet, she cautioned. She’s working with the Game Commission to get it off the ground.

Mary Jo Casalena, the commission’s turkey biologist, is still figuring out out which hunters might get the costly test kits if it does.

The Game Commission has the names of hundreds of avid grouse hunters. They annually report things like birds flushed and killed.

Casalena isn’t sure yet how she will identify serious turkey hunters.

But she wants to get West Nile information from adult birds taken by hunters if possible, she said.

Mark Wiley, forest game bird biologist for Ohio’s Division of Wildlife, said hunters there contributed some grouse information to the Game Commission. They will do the same for the turkey study if given the chance.