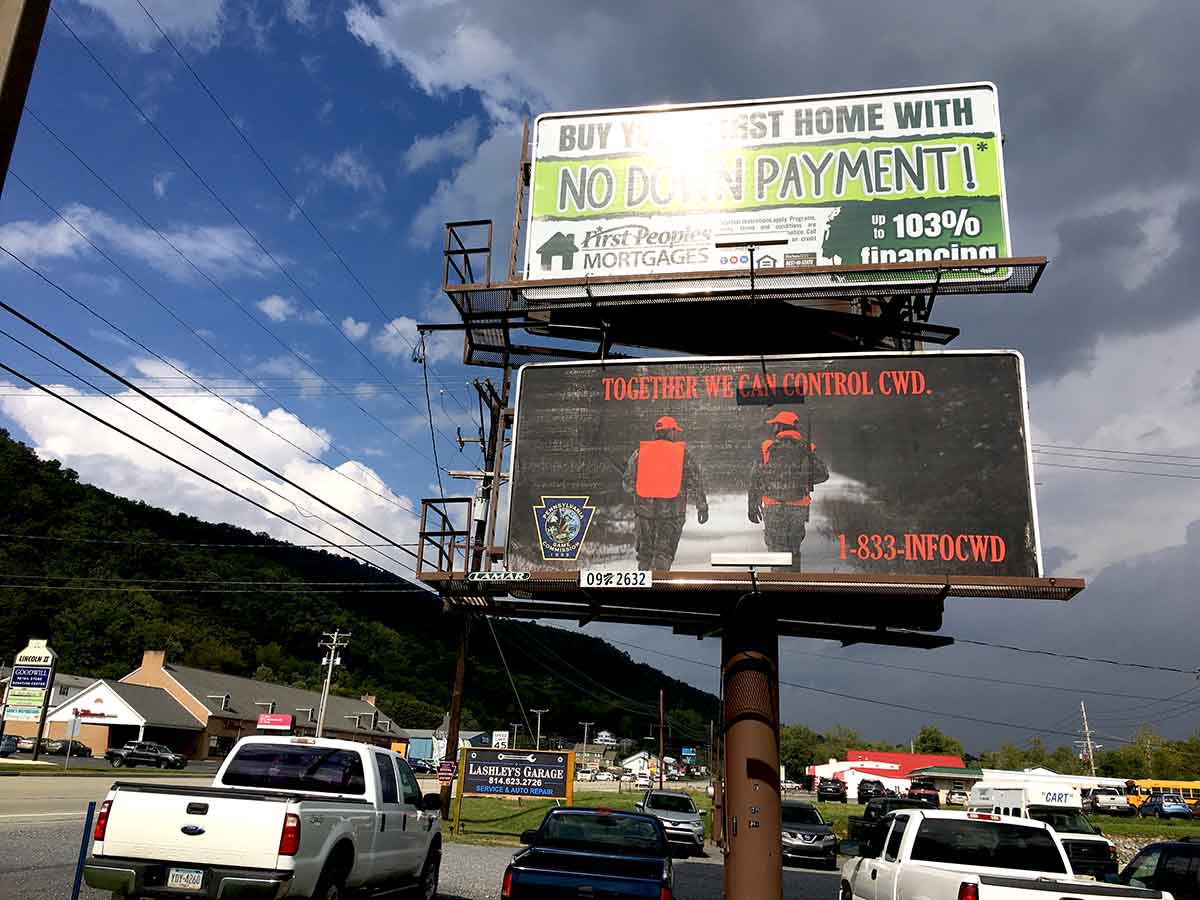 The Game Commission is using billboards and other tools to educate hunters about CWD.
Bob Frye/Everybody Adventures

Hunters are being asked to save the day regarding the future of white-tailed deer.

But this latest request comes with a Bizzaro World-type twist.

The Pennsylvania Game Commission rolled out its new chronic wasting disease response plan at a press conference in Harrisburg Thursday. It developed it in cooperation with scientists from wildlife agencies and conservation groups around the country.

The public can comment on the draft – preferably using this form — through Feb. 29. Commission board members will take that feedback into consideration before adopting a final version next spring and implementing it next fall.

That won’t be a minute too soon, it seems.

Wasting disease, commonly called CWD, is an always-fatal ailment affecting whitetails and other cervids. Rogue proteins, called prions, cause it by forming holes in the brain.

There’s no live-animal test to check for it and no vaccine to cure it, said Courtney Colley, the commission’s CWD communications specialist.

“CWD is a silent killer. It sneaks into an area and picks off one individual at a time, slowly growing, right under your nose,” Colley said.

It’s insidious in its persistence.

Deer transmit the disease from one to another via direct contact or by shedding infected prions into the environment through feces, urine and saliva. Colley said they last in soil for years.

Not surprisingly then, the disease is spreading across Pennsylvania.

CWD was first discovered in a captive deer in 2012 and in three wild deer a few months later. Cases have nearly doubled annually since and now total 250. Ninety percent are in Bedford, Blair and Fulton counties.

That number will continue to grow, with the disease reaching ever new areas, unless something is done, said commission executive director Bryan Burhans.

“CWD is truly an ecological disaster unfolding before our eyes,” he said.

That’s where hunters come in.

The commission’s response plan calls for drawing a circle with a 3-mile radius around spots where CWD-positive deer show up.

In both circumstances, the commission will survey populations prior to hunting seasons, said Jared Oyster, its CWD coordinator. Those will determine how many deer need to die.

On average, that will be 350 per circle, Colley said. That’s about four more per square mile than are being harvested now.

Hunters will get first crack at taking them. And to help, the response plan proposes giving them three tools: additional antlered and antlerless licenses, concurrent buck and doe seasons and the removal of antler restrictions.

The commission will turn to sharpshooters operating over bait at night to take deer “if and only if” hunters don’t reach the target goal, Colley said.

Two states – New York and Minnesota – eliminated CWD in wild herds by quickly and aggressively using hunters and sharpshooters to lower populations where sick deer popped up. Colley said a third, Illinois, has maintained 2 percent prevalence rates since 2002 by consistently doing the same.

By comparison, wildlife officials in West Virginia are monitoring CWD but not intensively managing it, Colley said. And as a result, 35 percent of deer are infected in places.

So, with proper management, there is hope, Colley said. But hunter buy-in is critical.

It can be hard to come by.

But the time for such arguing is over, said Game Commissioner Charlie Fox. Pennsylvania can no longer hope to get rid of wasting disease, he said. It might yet manage it, though.

“Given the importance of our succeeding, and the consequences of our failure, it is imperative that we all work together on this critical issue,” he said.

Burhans agreed, saying it’s only with the support of hunters – “our front lines in dealing with this disease” – that scientists can hope to get a handle on CWD.

Hunters answered the call to save deer once before, noted Nick Pinizzotto, president and CEO of the National Deer Alliance, a sportsmen’s group focused on deer conservation.

A century ago, unregulated market hunting and habitat loss decimated white-tailed deer in Pennsylvania. The commission resorted to importing deer from elsewhere to rebuild herds.

But here’s the twist.

Back then, hunters helped deer by sacrificing opportunities afield. They accepted shorter seasons and smaller bag limits – pulling the trigger less often – and let deer live for the long-term good.

Now, the commission said, their job is to do the opposite. To save deer and deer hunting in the face of CWD they must sometimes kill more than they’re accustomed to.

Though discovered in Colorado in 1967, CWD only moved east of the Mississippi River this century. Many people don’t yet understand it, he said, so aggressive control tactics sometimes seem “far-fetched.”

“And that’s a challenge we face, getting sportsmen to embrace what we’re trying to do here,” Pinizzotto said.

Some, too, wonder about sacrificing when captive deer farms — Pennsylvania has more than 800 – could potentially move sick animals around the state.

The state Department of Agriculture requires all captive deer to be in one of two monitoring programs. It quarantines farms with CWD, said Kevin Brightbill, the state veterinarian.

The program, in place since 2012, is similar in its aims to what the commission is proposing for wild deer now and seems to be working, Brightbill said.

Whether the department tweeks it remains to be seen. Agriculture spokeswoman Shannon Powers said feedback collected during this process will factor into any possible policy changes.

Then there’s the cost issue.

Though the commission manages all wildlife for all Pennsylvanians, it operates solely using hunter dollars. It gets no general tax revenue, for disease or anything else, Burhans said.

That’s always been the case, dating back to when hunters last alone funded the recovery of deer more than a century ago.

But, with the commission spending millions annually on CWD, some question whether that’s sustainable now.

Harold Daub, executive director of the Pennsylvania Federation of Sportsmen and Conservationists, said “hunting as we know it” is in jeopardy.

But “hunters and the Pennsylvania Game Commission cannot fund this effort alone,” he added.

No matter what, hunters must tackle CWD starting now, Pinizzotto said. He called it “a very real threat to deer and our deer hunting traditions across the country.”

Previous generations did what was necessary to perpetuate their hunting heritage, he said. He’s hopeful this generation will follow in those conservation footsteps.

“Sportsmen came to the table and saved deer and other wildlife in the past,” Pinizzotto said. “We think we can do it again.”