Getting ready for camping season and more outdoor news

It’s time to take inventory. Camping season is here, or soon will be for most folks, and some prepping is in order. Namely, it’s time to go through your gear and see what survived last year and what didn’t, what’s in good supply and what isn’t and what’s ready to go and what isn’t. Lay out a tarp and spread the contents of your camp box or boxes on it to see what you might need in terms of kitchen supplies. Inspect sleeping bags, backpacks and tents for tears or signs of wear. Figure out if you need stove fuel. Doing those kinds of things make it clear what you need and allow you to get it all in one trip. 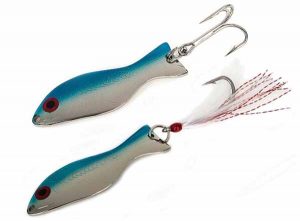 Sizes and colors: Available in three sizes – ½-, ¾- and 11/4-ounces – in more than a dozen colors, including neon blue, chartreuse orange, white pink, nickel, gold and copper.

Technique: Al’s goldfish lure is about as iconic as they come. Field & Stream named it one of the 50 greatest lures, and one of the 10 greatest trout lures, of all time. Now, the company is making a “Northern Edition” of the lure. Like the original, it can be cast, jigged or trolled. But it’s much larger, with larger game fish in mind. When casting this, allow it to sink to the desired depth – at a rate of about one foot per second – then retrieve it at a slow, steady pace. Add an occasional pause to mimic a dying minnow. Just be sure to tie the lure directly to your line or to a split ring. Adding a swivel kills the lure’s action.

Notable: These are available with one of two hook configurations. You can get them with 1/0 treble hook or 3/0 single J hook.

Coyotes howl. They bark. And they yip, too.

So what are they saying?

A lot, as it turns out, in a lot of different ways.

A number of researchers have investigated coyote vocalizations over the past 40 years, trying to determine how the animals – their scientific name means “barking dog” — communicate. The oldest work determined coyotes make 11 distinct sounds. Some more recent work claims the number might be as high as 17.

But all agree that the animals, legendary for their ability to survive amidst people and despite all effort to eradicate them, have a complex system for sharing information.

They are, in that way, less like birds and more like hyenas or lions. The former are thought to “speak” in syllables with a limited number or combinations, while the latter “talk” using calls that often flow into one another over a broad continuum.

In short, researchers say, coyotes can transmit a lot of information in a lot of ways.

What’s more, they believe coyotes can differentiate between one another based on their sounds or voices.

Yet, what’s perhaps most interesting of all is that some believe coyotes in different parts of the country can have different accents.

So when you hear that next coyote howl, take a minute to listen closely. There’s a lot of information on that lonesome sound.

Check this out, too: Keys to camping away from the crowds