Keys to camping away from the crowds 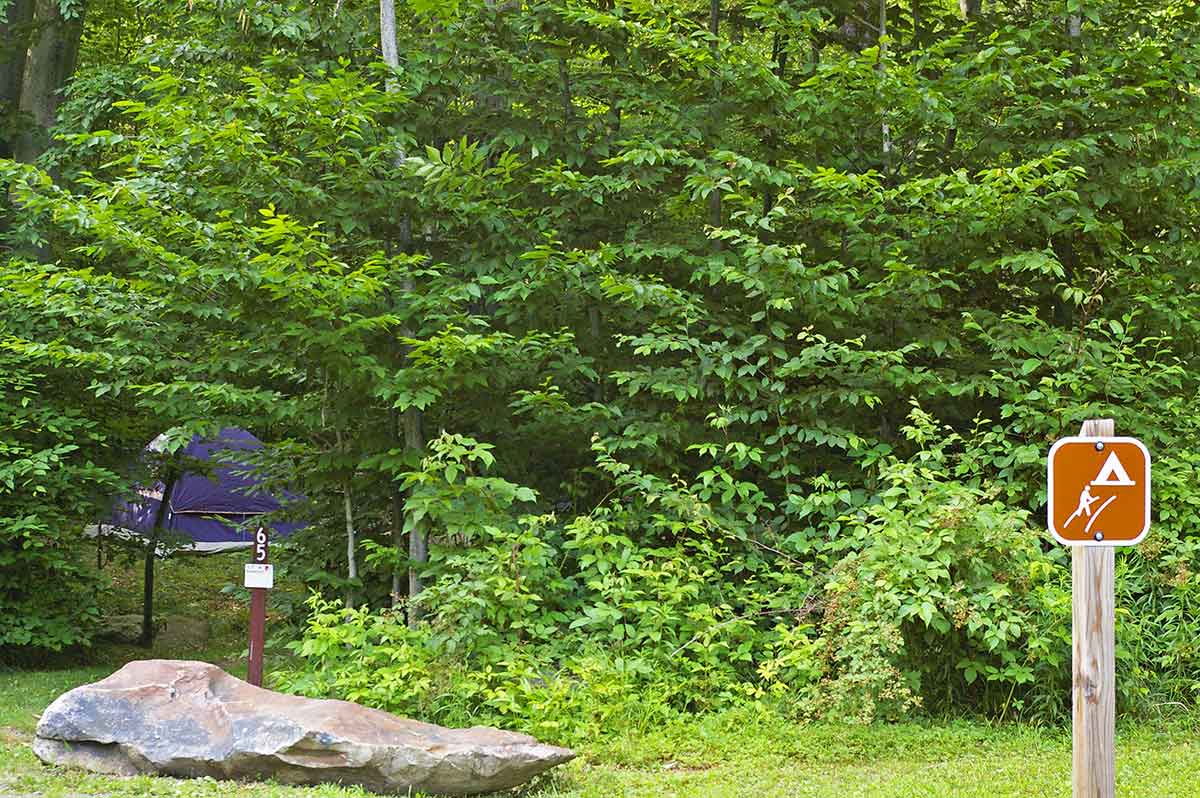 Camping away from crowds can be as simple as choosing a walk-in site.
Bob Frye/Everybody Adventures

It was a revelation delivered by the masses.

A friend — one who spent many a night camping with his son while they were in Scouts – went on a family trip, their first in a long while. Their destination was a popular state park.

On those prior outings, he and the Scouts stayed in designated “group” camping sites, set aside specifically for large parties. They are, as a general rule, separate from any park’s main campground.

Accommodations are often spare: think a field large enough to accommodate lots of tents, with perhaps a water source and a restroom. And that’s it.

But the tradeoff is seclusion. Neighbors are often non-existent.

My buddy didn’t expect that same level of solitude on his family campout. When he reserved their site online, after all, picking one from among many on a map, he knew other people would be close by.

He just didn’t realize how close.

“We were so close to other people I could hear the guy in the next tent over snoring all night long.”

An escape back to nature it wasn’t. Not of the kind he was expecting anyway.

But that’s how many campgrounds, public and private, are. They’re almost Henry Ford assembly line-like efficient, cramming as many people in as small a space as possible.

And therein lies a grand irony.

Camping is growing in popularity all across American. That’s fueled in part by increased participation among non-traditional – meaning more ethnically diverse – populations.

So says the 2019 North American Camping Report, an independent annual survey sponsored by KOA, or Kampgrounds of America.

More than seven million new households took up camping in the last five years, the report said. Roughly 1.4 million of those got involved for the first time in 2018 alone.

That brings the total number of campers across America to 78.8 million households.

All of those people are camping more frequently than ever, too. The report points out that the percentage of campers planning to get out three or more times each year grew by 72 percent from 2014 to 2018.

“The addition of more camping households, coupled with the increased propensity to camp more times each year, has led to a large increase in both the sheer number of campers, and the number of nights camped,” the report said.

Yet crowds are just what campers say they are fleeing.

According to the report, people are camping not only because of their “overall love of the outdoors,” but with the intention of “escaping crowds and noise.”

That’s hard to do in campgrounds that resemble woodsy apartment complexes.

But fear not. There are still ways to find tranquility out there.

Go when other don’t

This seems like obvious advice, but it’s good nonetheless. The report shows most people still get out on summer weekends.

The time between Memorial Day and Labor Day remains the busiest for campgrounds, what with people off work and kids out of school.

So if you have the flexibility to camp around those times – say in spring and fall, especially on weekdays — do it.

One growing trend among modern campers is that they tie outings to specific events, concerts especially. They don’t have to take place at the campground, or even the park it’s in, necessarily. Campers just want a place to stay while they do other things.

Camp when they don’t.

Along those same lines, think locally.

Not gone, but at least going, according to the report, are the days when people saw each and every camping trip as a major expedition.

Similar to staycations, close-to-home campouts are the new normal. In 2018, more than half of campers set up shop within 100 miles of where they live.

We were just talking about weekday camping, right? Well, if you find places where you can be pitching your tent an hour or two after leaving work, that opens up a new world. You can jump on opportunities as they appear, packing up and going when the weather, work schedules, family commitments and more align.

So don’t forgo adventure camping. But have a Plan B, too.

Work without a net

Be willing to take chances.

Everyone likes some kind of order, of structure. It’s why so many companies say their products come with your “satisfaction guaranteed.”

Campers are no different. Many like to have site reservations in hand before ever leaving home.

But there can be beauty in the unknown, too.

Most public campgrounds allow walk-up camping. What that means is, you don’t need a reservation. Instead, you show up at the camp office, all your gear in tow, and pick out and pay for a site right on the spot.

You can often even do it after hours in many places. Many state parks, for example, will have a map at the office door, showing which sites were still available when they closed. You pick one, drop your money – you need cash for this – in a courtesy box or envelope, and do your thing.

About one-third of all campers operate this way, the report said, so it’s hardly unheard of.

And it’s another way to avoid crowds. A bad weather forecast early in the week can scare people into staying home. But, if at the last moment it proves inaccurate, you can make the call to go while they’re at home.

The parks with the largest campgrounds are often the ones with the most attractions: big lakes for boating, paddling or fishing, swimming beaches, more and longer hiking trails, nature centers and the like.

All those things draw crowds. The report found that, after bathrooms, on-site recreation was one of the biggest factors people consider when in determining where to camp.

You want the same fun, yes. But sometimes, very nearby, you can find smaller parks with smaller, i.e. quieter, campgrounds. They can serve as great retreats.

You can drive to the big park for the day, play to your heart’s content, then enjoy dinner, stargaze and sleep away from all that commotion in the off-the-radar park.

Walk your way to quiet

Finally, be willing to walk.

We’re not talking about backpacking. But some parks offer “walk-in” sites.

The walk isn’t necessarily a long one. If anything, they’re sometimes laughably short.

Rather than park your car right next to where you’ll pitch your tent, you have to park and then carry all of your gear maybe 10 yards. Fifteen at most.

But those 10 or 15 yards are often screened by trees or bushes. So while you can usually still hear neighbors, you can’t always see them, or them you.

It’s not a wilderness experience by any means. But it’s at least a little more private. And maybe just private enough.

After all, the competition isn’t going away. The report determined that one third of all campers – more than ever in any previous survey – self-identify as “lifelong campers.” They intend to share the outdoors with you for a long time.

But that’s no reason not to stay home.

Whatever it takes, however you do it, wherever you go, get out and camp. The benefits are the same now as ever.

“Half of all campers say camping has a great deal of impact, both in general and for themselves, in decreasing stress levels and allowing them to spend more time with their families. In fact, camping is credited for contributing to emotional and physical health and overall healthier lifestyles,” the report said.