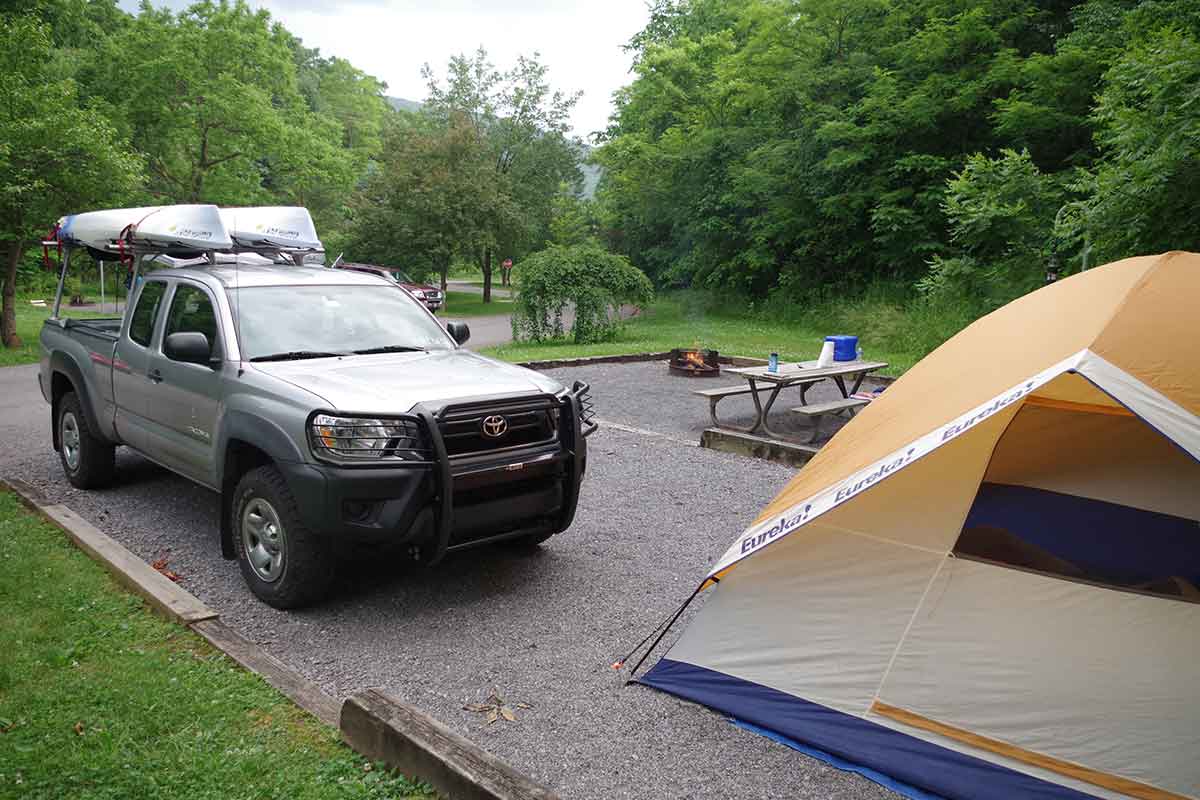 Not every day camping will be warm and sunny. But attitude as much as weather determines whether it’s fun.
Bob Frye/Everybody Adventures

There was giggling amidst the chaos. That’s always a good sign.

We’d spent the morning hiking, the afternoon swimming and the first part of evening eating ice cream. We followed that up with a dinner of simple but delicious pizza mountain pies.

The next morning promised a guided striped bass fishing trip early and kayak fishing for largemouth and smallmouth bass later, with a chance to see bald eagles mixed in all along the way.

So we were sitting around the fire, contentedly reflecting on what had been and anticipating what was to come, when we felt the first sprinkles.

We reacted pretty quickly. But not fast enough.

Within minutes — somewhere between putting the pie irons in the bed of the truck and grabbing swimsuits and towels hung out to dry – those sprinkles became a downpour. We scrambled for rain coats and ponchos, dashed about even more frenetically than before, then poured into the tent.

One of two air mattresses we were sharing, the 18-inch-thick queen model my wife’s back demands, was half flat.

That was a first. It had never failed us before.

Well, I do, I answered. But on the other side of the lion’s den, so to speak.

It’s one powered by the truck’s cigarette lighter — do they even call them that anymore? – and has a cord only perhaps five feet long. That meant to pump the mattress up, we had to take it back outside and hold it aloft by the hood of the pickup, once more in the rain.

Everything that could get soaked did.

Still, when we popped the mattress back in the tent, all seemed well. I headed for the camp restrooms to brush my teeth and get ready for bed thinking our crisis was averted.

When I came back, Derek was holding his finger over a pencil eraser-sized hole in the same mattress. His girlfriend Ashley rooted around in the truck for duct tape.

I looked down, rain dripping from the bill of my ball cap onto the tent floor.

It didn’t. In one sense, anyway.

Derek and Ashley took that mattress and, our tape fix not working, shortly began sinking from sight. They disappeared into the mattress’ fast-deflating center, like two hotdogs lost in a too-large bun, accompanied by the gentle hiss of escaping air.

It wasn’t until 20 minutes or so later, when the air mattress was the thickness of pita pocket without the stuffing, that they reappeared.

In between is when the giggling hit its peak.

But that’s just the way things go when camping. Crazy stuff happens, and how you react determines whether the campout gets remembered as a nightmare worthy of a Jim Gaffigan sketch or an equally comical but fun experience.

Fortunately in our case, given the option to sink or swim, Derek and Ashley did both, sinking into the air mattress, but swimming back out ready to go the next morning.

The fishing didn’t pan out like we’d hoped – the rain continued unabated and ruined that – but we still had fun. And that was the point of the weekend after all.

To camp, make memories and have a good time.

Mission accomplished, as the giggles attest.

Now is the time to get camping

If you’re looking for an excuse to go camping, or maybe even try it for the first time, here it is.

To mark the occasion, the National Wildlife Federation is once again hosting the Great American Campout. It centers around June 22, but really is a call to go camping all summer long.

Participants who register can camp on their own, take part in an organized campout or even host their own public event.

Doing any of the three helps wildlife. That’s because, now in its 15th year, the Great American Campout is something supportive of the environment.

If and when 200,000 people pledge to camp this summer, the Federation will donate 5,000 native trees to its “Trees for Wildlife” project.

Under that program, groups apply for free trees. Children, led by adults, plant and then care for the trees long term to benefit wildlife where they live.

All those who visit the Federation’s Great American Campout website can find resources to get involved, from information on “camping 101” to ideas for camping activities and more.