How to spot more deer and other outdoor notes

It takes more than just looking to see deer in the woods. Or more than just casual looking, anyway. Your best bet for spotting a whitetail is to examine an area twice, in two ways. First, scan the area in front of you slowly, without focusing too hard on any one particular object. You’re more likely to spot any movement that way. Second, after doing your scan, intensely break down every bit of cover in front of you. Peer into thickets, shadows and the like looking for eyes, bits of antler, a horizontal back or some other trace of a deer. Repeat periodically to account for deer sneaking in and out. 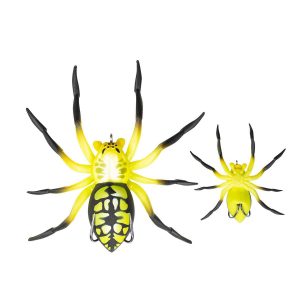 Technique: These lures are meant to mimic the most common spiders on the water during the warmer months. They have a hollow body, like that of a topwater frog, and walking legs that alternately glide and twitch on the retrieve. Located in the sternum is ballast that makes them run straight and stay upright. They fish best when worked in shallow water around docks, logs, weeds, and anywhere else spiders might be on the hunt themselves for food. This lure won the “best freshwater soft lure” category at this year’s ICAST. That’s the fishing industry’s annual trade show, where manufacturers roll out their best new products.

Notable: Getting these may take awhile. The larger size, and two newest colors – fang and huntsman – just went on sale on Nov. 11. Lunkerhunt is advising anglers that it’s filling orders as fast as it can, on a first come first serve basis.

Forget what “Bambi” taught you about deer families.

In the classic Disney movie, Bambi lives with his doting parents, both mom and dad, until the time comes to take over as the next great prince of the forest. It’s cute, and pulls at the heart strongs.

In reality, whitetails tend to live in matriarchal groups. See a bunch of deer together and it will likely be composed of an adult doe, her fawns from that year and any female offspring from the one before.

Sure, larger groups of deer get together at times when feeding. But the female-centric family group is the one that stays together when deer go their separate ways.

And any fawn buck gets just that one year with mom. When she’s ready to have her next batch, they move out on their own, even if his sister doesn’t.

Check this out now: Topwater frogs of a different color

And coming soon: Blue catfish are expanding into waters where they haven’t been for a century or more