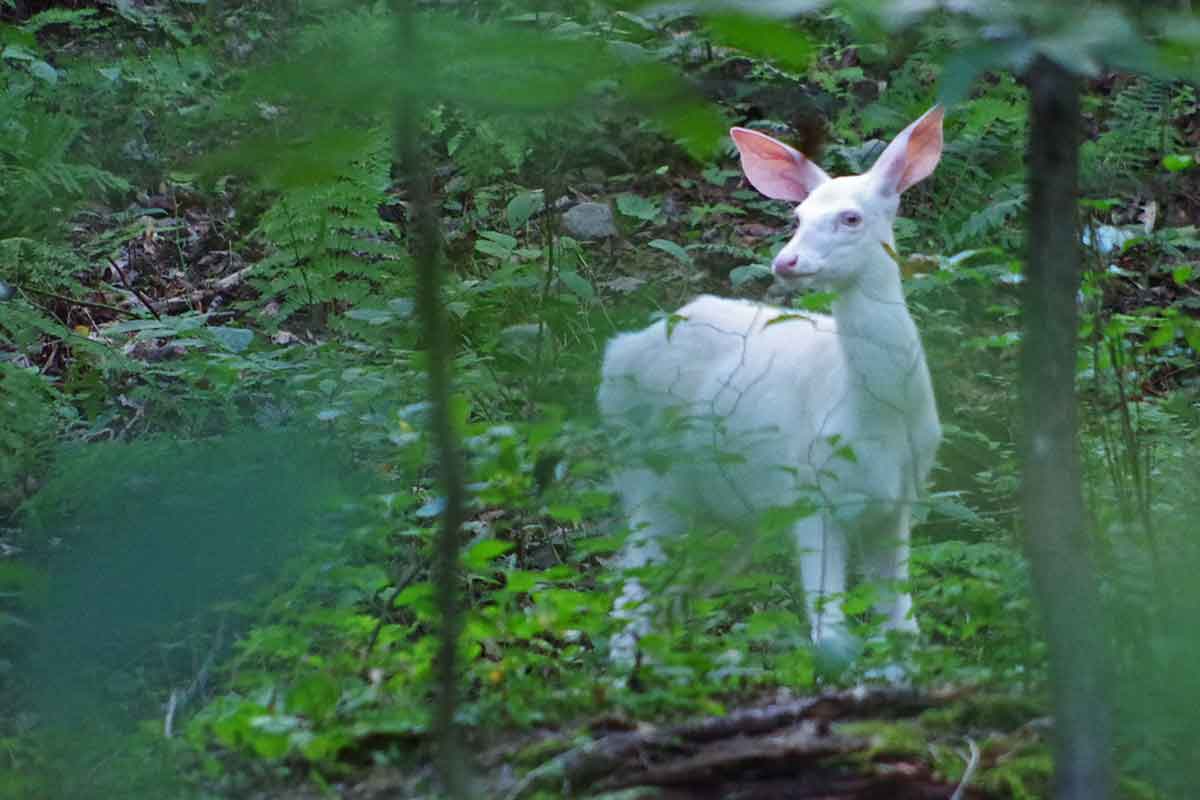 Albino deer like this one are a rarity.
Bob Frye/Everybody Adventures

The bright red brake lights of the SUV stopped in the road in front of us offered a hint of what was to come.

But only a hint.

It was near dusk, and my wife and I were driving around and through a local state park. Having hiked to a favorite waterfall earlier, we were now looking for deer before heading home.

This is a good time of year to see fawns. Though still sporting their distinctive spotted coats, they’re nonetheless old enough to be active and as a result visible.

We saw a dozen-plus whitetails, mostly around field edges, and thought perhaps the people in the vehicle in front of us spotted another one or two. They had.

But not the kind we were expecting.

Instead, what they were looking at – and what we came to see – was a solitary doe 20 yards or so off the road edge, in the forest. She was small, perhaps a year old, relatively unconcerned, contentedly feeding.

And all white. A true albino, so far as we could tell.

That it was, thanks to its scarcity.

Albinism in general is a genetic condition in which deer, other animals, even people are born without the usual amount of melanin pigment in the skin, hair and/or eyes. In whitetails, that leads to white hair, pink noses and hooves and, most often, blue eyes.

Their skin can appear pink, too, though it’s really just exceptionally pale. The pink comes from the blood showing through.

True albino whitetails are an anomaly. Some research suggests only one in 20,000 or even 30,000 fawns are born that way.

Those are pretty long odds.

Not even every white deer is an albino, after all.

Some white deer exhibit luecism. According to Jeannine Tarfiff Fleegle, a biologist in the Pennsylvania Game Commission’s deer and elk section, that’s a condition characterized by reduced pigmentation, as opposed to a total lack of it.

“It is caused by a reduction in all types of skin pigment, not just melanin. A deer can have a completely white coat but have brown eyes or black hooves,” Fleegle said.

The most famous concentration of white deer anywhere exists at the former Seneca Army Depot in New York. Most of those have white coats, but otherwise usual coloration.

Meanwhile, there are deer that sport normal coats, but with splotches of white. Sometimes those splotches are tiny, sometimes they’re large. Either way, the result is deer that look much like a pinto horse.

Those are called piebalds. They’re not as uncommon as albinos or white deer, but still pretty rare. Fleegle said they represent less than 1 percent of the deer population, usually.

The rarest of all, perhaps, are melanistic, or black deer. They’ve been documented in at least six states, though they can occur anywhere across the whitetail’s range. Texas in particular seems to be a hotbed for them.

None of those color variations, interesting as they are, are necessarily good for whitetails.

Albinos like the one we saw stand out like a light bulb against the dark greens and browns of the forests in which they live. That makes them readily visible to predators.

And there are other problems.

“Melanin helps to protect the skin and eyes from the sun’s ultraviolet radiation. This leaves these animals very sensitive to overexposure to sunlight increasing their risk of melanomas and retinal damage,” Fleegle said.

Add to that the increased chances of other physical abnormalities – including skeletal and organ deformities – and the odds against oddly colored deer are stacked pretty high.

“As a result, they usually die at an early age,” Fleegle said.

So getting a peek at one is pretty special.

The particular park where we spotted this albino, and the state forest that surrounds it, has a history with white deer. Park officials say they’ve spotted white deer in the area periodically over the last 15 to 20 years or so, and maybe longer. One of those deer reportedly grew into an 8-point buck.

Clearly deer there are passing along some unusual genetic traits.

But we haunt the area a lot, year round, and had never seen one before.

So we count ourselves lucky for having gotten a glimpse of this one. It was a first – and maybe a last – for me despite 30-plus years roaming he deer woods.

The science of hunting and harvesting albino and white deer

White deer have always had a place in mythology. Oftentimes called “ghost deer.” some elevate them – despite being biologically inferior — to almost spiritual status.

It’s illegal to shoot white deer in all or parts of four or five states.

And a Pennsylvania lawmaker this year suggested adding his state to the list. State Rep. Aaron Bernstine, a Lawrence County Republican, is prime sponsor of House Bill 909. It would make it illegal to shoot albino or other white deer.

It would allow hunters to continue harvesting piebalds.

The bill hasn’t moved at all. It was referred to the House of Representatives game and fisheries committee on March 20. Lawmakers haven’t discussed it since.