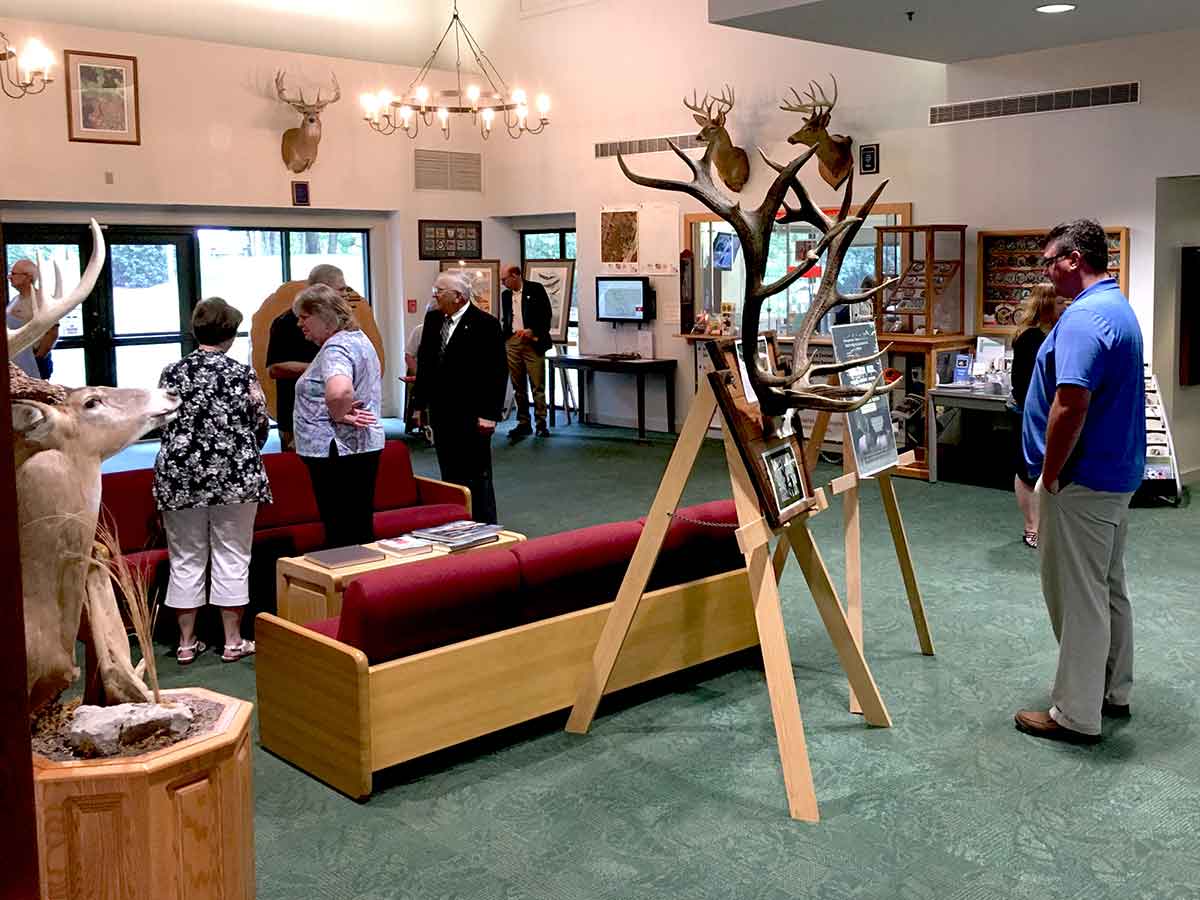 Visitors fill the lobby of the Game Commission’s Harrisburg headquarters Monday, prior to its quarterly meeting. The commisison is correcting license sales problems there and elsewhere around the state.
Photo: Bob Frye/Everybody Adventures

More than a month after 2019-20 Pennsylvania hunting licenses went on sale, tens of thousands of people who purchased theirs online are still waiting to receive them.

Licenses bought online are supposed to be printed within 24 hours, mailed immediately thereafter and arrive within seven to 10 business days.

But that didn’t happen this year for many.

There are two problems, it seems.

First, there was a “very large volume” of sales on day one, said Tammy Klinger, license division chief for the Pennsylvania Game Commission. Aspira, the Dallas, Texas-based, software vendor responsible for the commission’s online licensing system, couldn’t handle that.

“They didn’t prepare adequately. They got backed up quickly and then they couldn’t catch up,” Klinger said.

Second, a glitch in the fulfillment system lost or shelved some licenses.

“For whatever reason, licenses for anybody whose first name begins with an R did not get printed and mailed. Or they got printed and not mailed,” Klinger added.

The commission became aware of the problem on July 12. Aspira, she said, confirmed the problems on July 18.

The commission can’t pinpoint the exact number of hunters and trappers impacted, Klinger said. But in the first four days licenses were available for purchase, hunters who first name begins with R made 20,000 transactions.

“So it could be that or more,” Klinger said.

There are other problems, too.

Some hunters who purchased their licenses online indeed got them. But, Klinger said, a portion didn’t get the hunting digest that’s to accompany it. Others didn’t get any of those familiar pink envelopes for applying for antlerless licenses.

Overall, between July 1 and 18, the commission logged more than 3,000 complaint calls related to license miscues. That’s about 20 percent above the norm, Klinger said.

“About 90 percent of those have something to do with the fulfillment center’s failures,” she added.

Commission executive director Bryan Burhans apologized for all of that.

“We’ve worked with the same license vendor for several years with few issues, so the problems that emerged this year, which likely have impacted thousands of hunters, not only were unexpected, they are frustrating for the agency,” he said.

So now it’s about fixing the problem.

The commission is hoping the worst is over.

Aspira, Klinger said, fired two people responsible for Pennsylvania license sales. And it appears to now be turning around online sales within the required time frame, she added.

Meanwhile, the commission is providing impacted hunters and trappers caught up in the first wave of struggles with their licenses.

The commission is reprinting and mailing licenses on its own, Klinger said. It printed 120 licenses in the first two days after confirming the problem, for example.

Yet that’s “only scratching the surface,” she admitted.

But Burhans said the agency will “straighten out any problems” hunters are experiencing.

The quickest solution, said Travis Lau, the commission’s communications coordinator, is to either call the agency or visit its Harrisburg headquarters or one of its regional offices. It’s reprinting licenses for free.

Burhans also said the agency is helping hunters who missed out on submitting an antlerless deer license application.

One “doe tag” application comes with each license. Tags went on sale July 5.

The commission is telling hunters who have yet to receive their license to print that application out at home and submit it that way. It’s even been emailing applications to hunters.

And as of July 22, only one wildlife management unit, 2F in the northwest, had sold out. First round unsold licenses don’t go on sale until Aug. 5 either.

So hunters still looking for a doe tag can probably get one, Lau said.

“It looks like there’s still adequate time for folks,” he said.

Longer term, the commission plans to seek compensation for Aspira’s miscues, Klinger added. It can assess a penalty for every license not printed within 24 hours of hunters ordering them online.

Aspira collects 90 cents per transaction. It bills the commission accordingly.

Fines assessed by the commission cannot exceed 20 percent of that monthly bill, Klinger said. It’s therefore unlikely it can penalize the company as much as it would otherwise.

But that’s an issue for down the road.

“For the next couple of weeks we’re going to be doing damage control. But we have our hunters’ best interests in mind, and we just want to get them served as they should have been served in the beginning.”

But it’s not who you think.

Right around this time last year, both commissions touted the signing of contracts with Sovereign Sportsmen Solutions. That’s a Nashville, Tenn.-based company. That ended an 18-month search for a replacement for Aspira.

Its new system was to be in place by February of this year. It was to offer the commissions access to data on its customers unlike anything they had seen before.

Instead, the commissions terminated that contract earlier this year. S3’s “out of the box” system was not as advertised, said Tammy Klinger of the Pennsylvania Game Commission. It missed delivery dates as a result, she added.

The commissions since signed a 10-year contract with the second-lowest bidder, NIC Inc. of Kansas. NIC works with agencies in 27 states. It not only sells hunting and fishing licenses, but handling all manner of online payments.

Adding Pennsylvania to the mix will make NIC “the largest provider of hunting licenses in the United States,” it said.

Its system for the Fish and Boat Commission will handle fishing licenses, boat registrations and more.

“For nearly 20 years NIC has been providing cutting-edge outdoor recreation licensing services,” said Harry Herington, CEO and chairman of the board for NIC. “Pennsylvania will benefit from our expertise in this area throughout the country, in addition to the new elements we are configuring specifically for their needs.”

The commissions expect the new system to go live in February of 2020.