There’s a lot to be said for snowshoeing your way through fields and forests at this time of year. The bugs are gone, the landscape seems fresh and clean and crowds can be smaller. But snowshoeing brings challenges, too. Namely, deep snow requires that that you take longer-than-normal steps to get around, especially when traveling uphill. That can lead to sore or even pulled muscles. To keep injury at bay, be sure to stretch before exploring, focusing on your hamstrings and other leg muscles. And drink lots of water as you walk, too, to avoid getting dehydrated and risking muscle cramps. 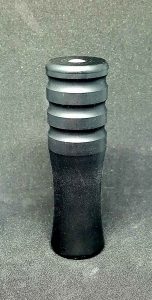 Product description: This is a tough time of year for all wildlife, and no less so for predators. Temperatures are generally as low as they’re going to get and food supplies are at their scarcest. That makes it hard for coyotes, foxes, bobcats and the like to take in enough food each day to meet their caloric needs. So food is always top of mind. That’s why a call that mimics prey in distress can be so effective for hunting. And the Sqweelin Wabbit does just that. It sounds like something to eat — a rabbit, squirrel or other small mammal – that’s in trouble.

Available options: This call is made of unbreakable delrin, which means it can withstand being used in all kinds of hunting conditions.

Notable: To get the most out of this call, put some emotion into your calling. Vary the pitch, tone and duration to sound like something that’s really in trouble. Hungry predators will respond, looking for an easy meal

Is this a statement about marriage?

Not necessarily, but it is odd.

Paddling has grown in popularity in recent years, with kayaks and stand-up paddle boards in particular flying off shelves. Most of both are designed to be used by one person at a time.

Canoes, by comparison, are most often intended for two people to share.

Yet, according to some research, kayakers are more likely to be married than canoers.

But just 37 percent of canoers are hitched.

But were they? Are they former tandem paddlers who have left a spouse behind?

That’s not seemingly the case either.

Thirty-three percent of kayakers are single or have never been married. That jumps to 37 percent for paddleboarders.

Meanwhile, 39 percent of canoers are single or have never been married.

Maybe canoers just like space and solitude in equal measure.

Check this out: Solo canoes and pack boats growing in popularity

And read more: Love the outdoors? Sign up to receive the free weekly Everybody Adventures newsletter. It’s got award-winning stories and videos on hunting, fishing, camping, paddling, backpacking and more from around the country. Get it here (https://adventures.everybodyshops.com/newsletter-sign-up/).