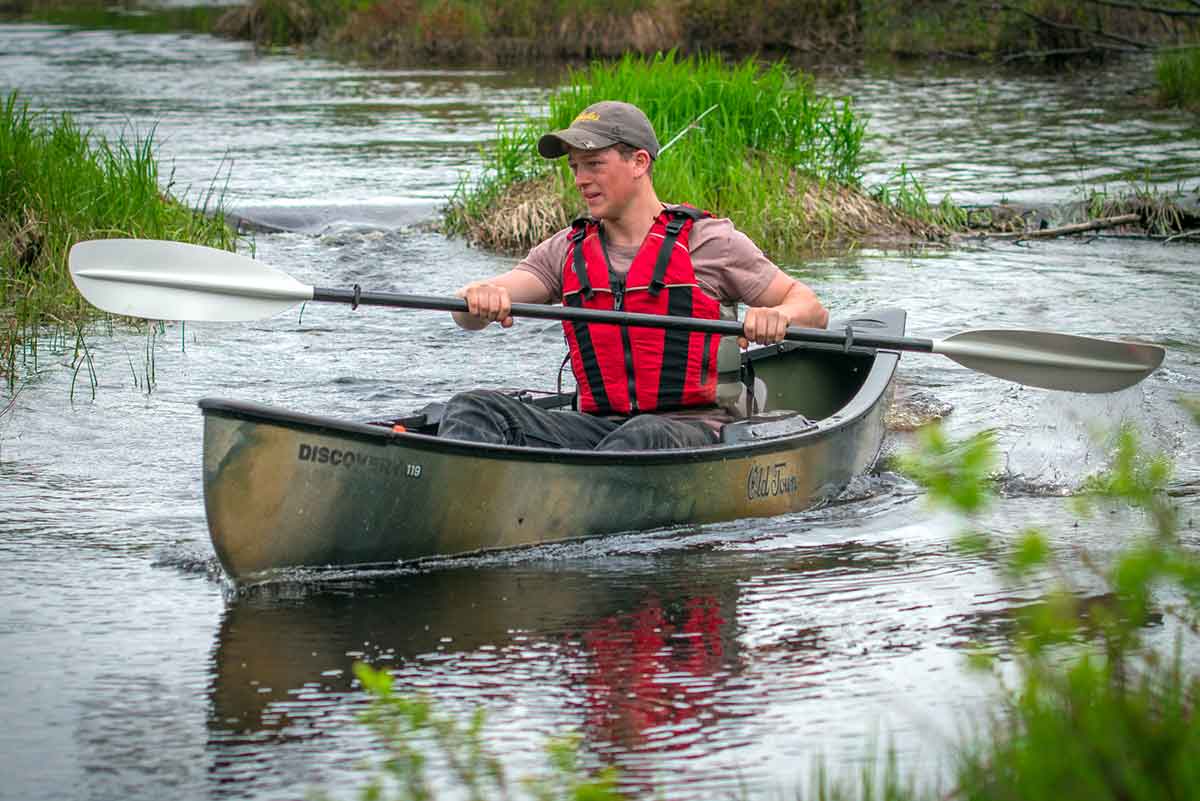 Solo canoes and pack boats, like this one, are increasingly popular among paddlers.
Photo courtesy Canoe the Wild

As boats go they’re often overlooked, or at least have been in recent years, as evidenced by the ebb and flow of consumer wants and demands.

Solo canoes and more especially pack boats – a canoe-kayak hybrid – are, if not surging in popularity, at least back on the radar in a pretty big way.

The why of that is a matter of awareness.

The boats have always been around, said Scott Way, brand manager for Swift Canoe in Muskoka, Ontario. Rarely do you find them in the big box stores, though.

“So not a lot of people knew they were an option,” he said.

Solo canoes are one-person version of tandem boats, with a bench seat that puts the paddler high up, close to the gunwale. You power it with a traditional, single-blade canoe paddle. A pack boat has a canoe body but with a kayak-style seat set deeper inside it. You power it with a two-blade kayak paddle.

Both have real advantages, Way said.

“I think the biggest thing that draws people to solo canoes is just ease of use,” he said. “Regardless of your skill level, regardless of how often you go to the outdoors, to get out and explore, solo canoes are just really easy to use.

Those are just the things many paddlers are looking for these days, said Dave Conley, a registered guide and operator of Canoe the Wild in Weston, Maine and a representative of Old Town Canoe.

A decade or more ago, he said, he most often booked 10-day canoe trips, where paddlers set off in tandem boats loaded with the appropriately larger amounts of gear. It’s almost impossible to fill all the slots on one of those now, he said.

“The trend seems to be towards wanting to take part in numerous experiences with the desire to not be removed from electronic gadgets and creature comforts for more than a few hours at a time,” Conley said.

Many people want to do trips measured in hours, he said. And more often than not, they want to paddle their own boat, without a partner.

Solo canoes and pack boats allow them to do that, he noted.

Way agreed, saying pointing out that people in solo canoes and pack boats can strike out on their own or paddle in groups, but either way be in control of where they go and how fast or slow they get there.

Kayaks, of course, offer that ability, too.

Paddlers branching out into overnight or longer trips appreciate that.

“Kayaks are fantastic fun and they are very easy to paddle. Their biggest downside is storage,” Way said.

“So what a lot of people are finding is, if they were kayak trippers, but they’re sick of having to really finesse how they load a boat, a pack boat or solo canoe can move quickly and efficiently and carry more stuff.”

And unlike true tandem canoes – those 16 feet are longer – one person can handle them.

Still, solo canoes are not all equal, Conley said.

Shorter boats – say 12 feet or less – are perfect for anglers and duck hunters spending time on relatively flat water. They’re generally light, too, something that makes them ideal for transporting to smaller, hard-to-reach lakes.

Indeed, that’s why sportsmen and women are among the biggest users of solo canoes and pack boats, Way added. A lot of people who previously used sit-on-top fishing kayaks are switching to these boats.

“They’re extremely stable. There’s a lot of room for all your gear, bait, tackle. And you can still kind of maneuver around inside the boat,” he said.

“So hunters, fishermen, they’re starting to realize how versatile a solo canoe or pack boat can be. It opens up a whole new list of opportunities.”

Larger paddlers might want to go to something a few feet longer, though, in the 14- to 15-foot range, Conley added. So, too, might canoe campers.

“For the longer trips especially when you’re loading the boat with camping gear and more freeboard is needed, you’ll want something bigger,” Conley said.

And – as with backpacking gear – the lighter a solo canoe or kayak is, the more expensive it is, Way said.

But, he added, the boats are not necessarily more costly than a good kayak or tandem canoe.

Beyond that – as more and more people are finding out – they’re simply fun to paddle.

“In terms of just making your time outside as enjoyable as it can be, solo canoes and pack boats are usually a few less headaches than if you’re trying to deal with something else,” Way said.