A look inside our annual hunting gift guide 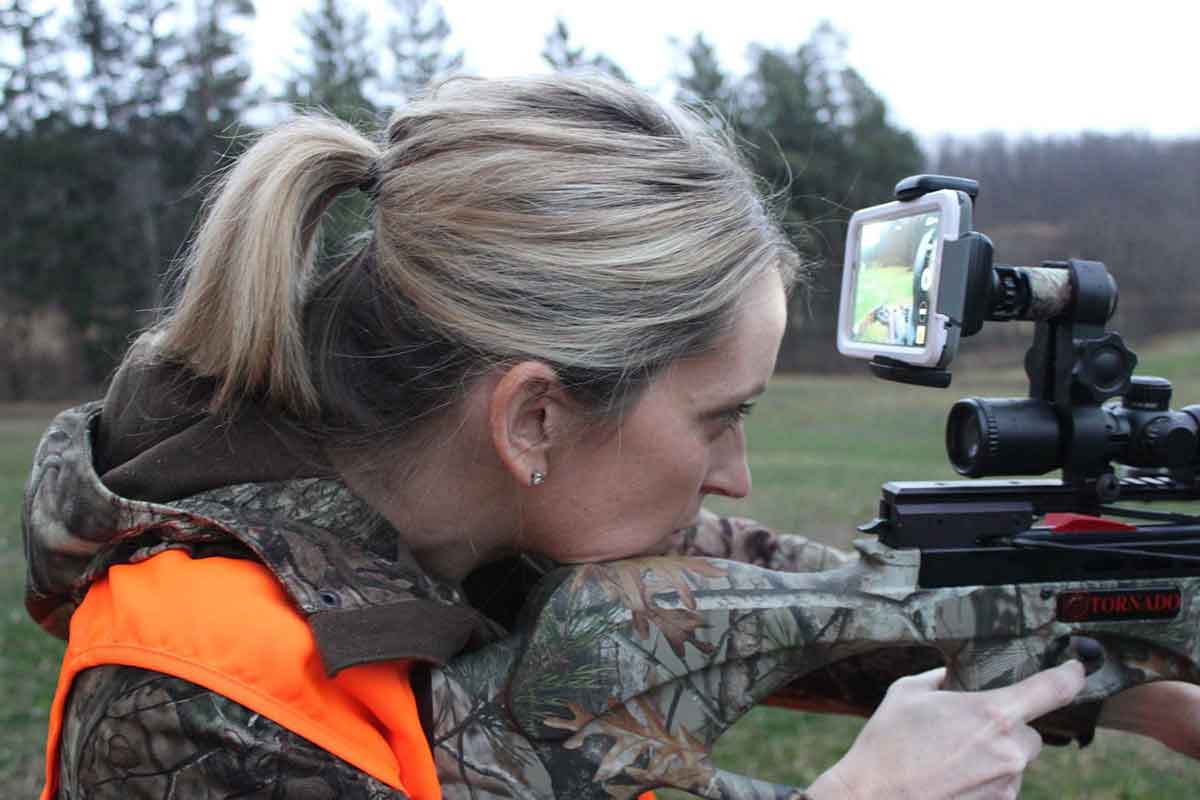 The GameStick turns your smartphone into a hands-free video recorder.

The first Christmas after my love of the outdoors took root, my non-sporting parents asked what I wanted under the tree.

“Hunting and fishing stuff,” I said.

That did nothing to clear things up for them.

Maybe you’re in the same situation, unsure what to buy the sportsman or woman. If so, we offer the following hunting gift guide full of ideas.

There are days on the shooting range that require a workmanlike attitude, like when you’re dialing in a rifle so it hits right where you aim. Then, strict attention to form is necessary to achieve the desired precision. 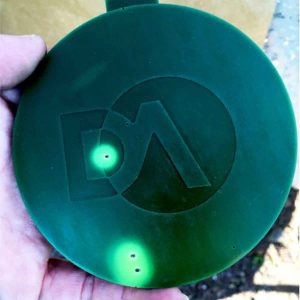 There’s nothing wrong with that. It can even be enjoyable.

But sometimes the goal is just to have a little bit more laidback fun. You want to punch holes in things.

Made of a special polymer, they’re heat sensitive. What that means is, when your bullet passes through the target, it causes the target to change color and almost glow.

Unlike splatter-style paper targets, Double Action targets return to their original color when they cool back down. That means you can use them over and over for hundreds of rounds.

These work with all calibers of rifles and handguns and are available in 4- and 6-inch models. Some are rated for 45 to 80 degree weather, others for 60 to 100.

In all cases, each target comes with a 6-inch strap so you can hang it from or staple it to a backstop.

You’d be hard pressed to find a hunter or shooter who didn’t get his or her start with a .22 rimfire. They’re light on recoil, heavy on fun, relatively easy on the ears, and economical to shoot.

But they don’t have to be just kids’ stuff.

The Winchester Wildcat is full of innovations.

As proof, enter the new Winchester Wildcat. Released earlier this year, it’s a .22 autoloader that’s as innovative as it appears.

With a skeletonized composite stock and top and bottom picatinny rails it just looks modern. But there’s depth here, too.

For example, the Wildcat’s lower receiver pops out with the pushing of a button. Inside that receiver are two Allen wrenches, one for adjusting the rear sight and another for removing the stock.

The Wildcat is also easy to clean using a rear “access port.” That protects the barrel crown long term.

This rifle has some other nice features, too. They include a ghost ring rear sight and ramped post front sight, reversible safety for right or left handed shooters and built-in sling eyelets. It handles Ruger 10/22 and aftermarket compatible magazines.

Walking out the front door on any given day carries with it risk. That’s life.

But more often than not, help is relatively closes by. 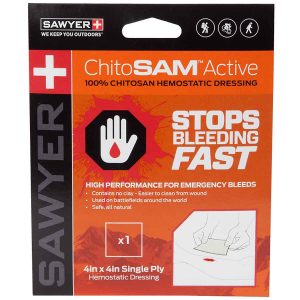 That’s not always the case when exploring outdoors. Anyone who carries a firearm or a bow, who rock climbs, hike to overlooks and outcrops, paddles through rocky waters or cuts kindling for campfires can find themselves beyond quick reach if an accident strikes.

What happens if someone suffers an unintentional gunshot wound? Slices open a hand? Rips a jagged tear in their skin falling from a rock?

Simply, you have to be ready to save yourself.

For that reason, ChitoSAM Active should be a part of everyone’s first aid kit.

This 4-by-4-inch dressing is made from chitosan, a sugar collected from the hard outer shells of crustaceans like crabs. It works by stopping lethal bleeding fast.

Unlike some other products made with clay, though, this one doesn’t burn skin or spread through the wound into the body. That’s why it’s a staple in many military and first responder kits.

They’re great for stuffing in a daypack or shooting range bag.

A larger version of this dressing, almost a roll, is also available.

Check out deer hunting groups on Facebook in fall. You’ll see the same question asked over and over, all over the country.

A distraught archer says he shot at a deer but didn’t recover it. He posts a photo of his arrow. There’s a bit of hair on it, and maybe some blood or other matter.

Gut Check Indicators tell where on an animal the arrow passed through.

Wondering what went wrong, he asks where his arrow likely hit?

Typically, the answers are so wide-ranging as to be more confusing than anything else.

There’s an alternative. Gut Check Indicators are wraps that slide over arrows and crossbow bolts.

Two varieties of wraps are available: one intended for whitetails, mule deer, elk and moose, another for hogs, turkeys and bears.

And if you don’t want to add wraps to your arrows or bolts, Gut Check wipes are also available. Run those over and arrow immediately after shooting an animal and the wipe will change color based on the presence of blood or stomach acid.

Chances are you aren’t going to run into many zombie children in the deer woods. Probably not many dinosaurs either. 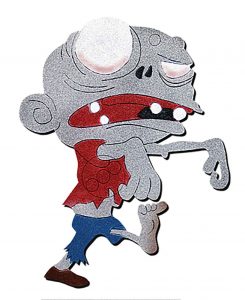 A variety of On Core targets are available.

But it doesn’t hurt to be ready, just in case.

You can prep – and have some serious fun in the process – thanks to OnCore’s two-dimensional archery targets.

They aren’t stand-alone targets. You pin them to something like a hay bale – I use 6-inch pieces of metal coat hanger, cut to put an L-shaped hook in one end – for a backstop.

But they are made of a self-healing foam. The marked scoring ring alone can handle hundreds of shots; the target overall can take thousands.

They’re relatively inexpensive, too, especially compared to 3D ones, so you can buy a variety and choose what you want to shoot on any given day. And there are plenty of options, from a “walking zombie kid” to a dinosaur, black bear, white-tailed deer, fox, turkey, bottles, even an oversized apple if you want to get your William Tell on.

These are all hand painted and able to withstand a lot of weather. They’re especially fun if you’re introducing a child or other new shooter to the sport.

It sounds like a dance left over from the Disco era, best performed in bell bottom polyester pants, a shirt open nearly to the navel and lots of chains.

But this is, in fact, a turkey decoy. Unlike some others on the market, though, this one made by Flextone isn’t supposed to look like the most eligible bachelor in the club. Just the opposite is true.

The manufacturer says this decoy is supposed to appear the “wimpiest and skinniest” jake in the woods. It’s smaller even that the first version of this decoy, and missing any tail feathers.

And that’s the whole point.

Those details make the decoy an appealing target for larger, more mature gobblers looking to steal a lady friend.
It looks lifelike, too. Molded using a new pattern, it offers more paint detail than the original Funky Chicken. It comes with a reinforced ground stake and attached synthetic bear. It folds up for easy carrying.

It’s a startling if undeniable truth. Most people walk around today with more technology on their hip than America’s first astronauts took into space.

Smartphones are that powerful. 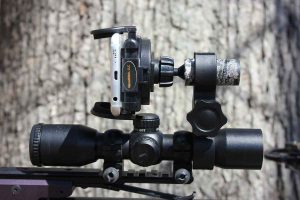 The GameStick attaches to anything cylindrical.

So why not take advantage of that outdoors? Hunters and anglers can do just that with the GameStick.

It’s not a camera. Instead, the GameStick is a phone mount.

One end attaches to anything cylindrical: a rifle or shotgun barrel, bow, fishing rod, pack frame, a branch, even certain kayak deck or canoe gunwale parts. The other holds your phone, allowing for hands-free video recording.

Say you’re in a tree stand and you see a deer coming in. You use your phone – pointed the same way as your sight or scope – to start recording. That allows you to capture the entire event, from sighting the deer through your shot, on your phone.

You can likewise video a hike, a paddling trip, or any other experience or encounter.

The phone holder side of the GameStick is adjustable to accommodate different size phones. It clamps shut to hold the phone in place, though you also get gum bands to use for added security.

Versatility, that’s what everyone wants of the tools in their backpack, to save space and weight.

Why not look for the same in a pack itself? 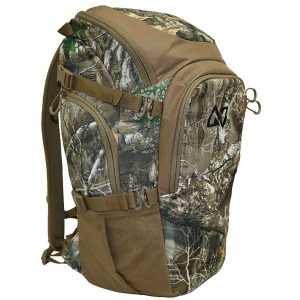 The Whitetail Caddy pack is designed to be versatile.

For example, its front pockets fold down for use in a blind or tree stand, where there might be no other flat surfaces. Likewise, it has a built-in shelf for holding binoculars or rangefinders. It has an adjustable hanging loop for attaching to a limb, too.

But turkey and predator hunters will like this pack, as everything else about it is meant to do double duty.

You can use reversible, adjustable, and removable external compression straps to carry a bow into the woods or a turkey out. Or you can take them off completely.

Likewise, the pack has a fully adjustable waist belt that slides into two hidden pockets between the back panel and pack if you just want them out of the way.

The pack also has sternum cross straps, MOLLE loops on the adjustable padded shoulder straps and an integrated bottom frame that allows the pack to stand upright. It holds a hydration bladder, too.

And it’s flat out roomy, with a capacity of 1,950 cubic inches divided across 18 rain-resistant pockets.

Check this out now: Forget waiting for deer, here’s how to successfully track them

And coming soon: Our annual gift guide for anglers and boaters