This spring, focus on rivers and streams for consistent trout action 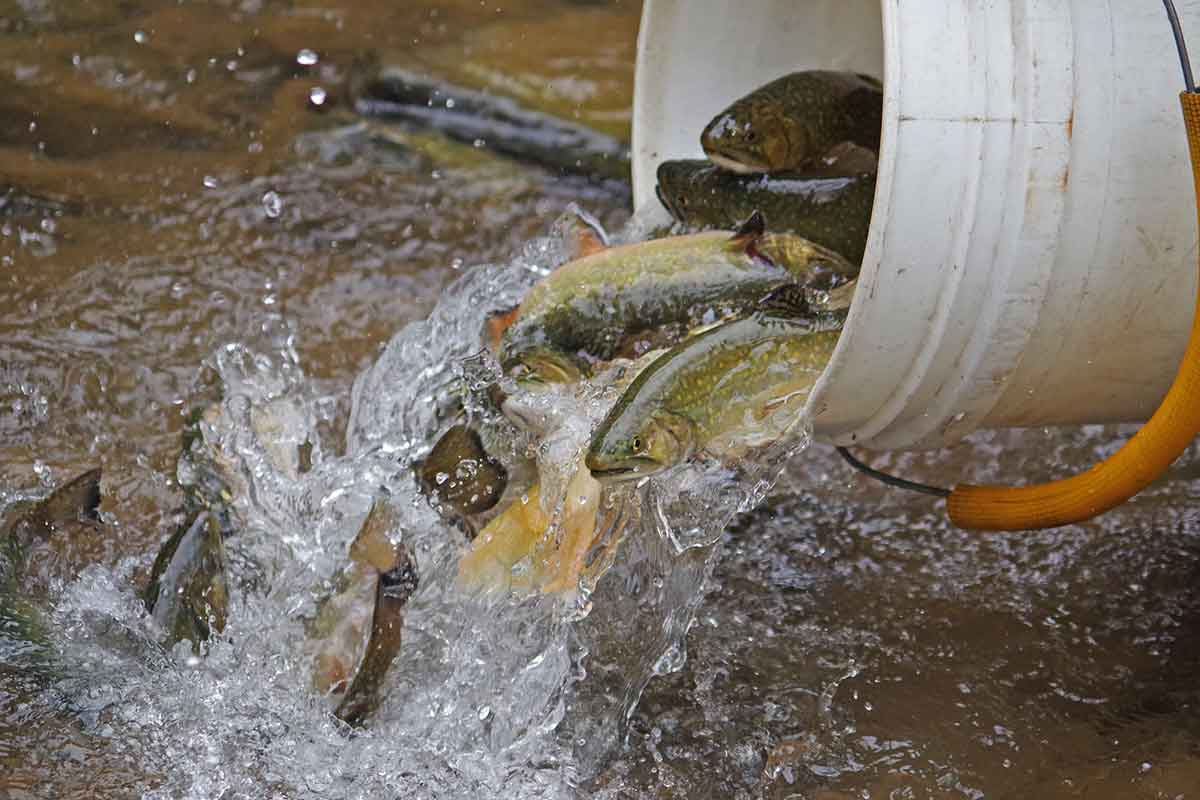 So you want to get in on the trout action happening this spring? Look to moving water.
Bob Frye/Everybody Adventures

Birders have their returning tree swallows, hikers and other woods walkers their skunk cabbage, gardeners their daffodils, and tree lovers their cherry blossoms.

All are signs of spring.

Oh, sure, the season officially began on March 20. But for plenty of people, it only really arrives when their favorite brand of marker appears.

It’s the same with anglers.

For lots of them, spring doesn’t get rolling until certain colors — golds, browns, red and blue polka dots and the shades of the rainbow – take center stage. Those come in the finny variety with the start of trout season, when hatchery-raised goldens, browns, brooks and rainbows suddenly populate rivers, streams and lakes.

That time is here or about to be.

Across the Northeast and Midwest, state fisheries agencies are stocking trout. Most have been at it for weeks already.

Some allow fishing even as those releases are going on. Others, like Pennsylvania, largely prohibit fishing until a specific opening day. In the Keystone state, the statewide opener is April 13 this year.

In all cases, much of the trout action centers on moving water. While some stocked fish go to lakes and ponds, the majority wind up in rivers and streams. That totals mile and miles of water.

Yet not all of it is created equal.

On any particular river or stream there are certain areas where fish – even those recently dumped out of the back of a truck – will congregate. They find their way to such spots pretty quickly, too, regardless of where they were released, because they offer the best opportunity to find food, avoid predators and rest.

Anglers who spend their time casting to those places catch more fish.

One fish-holding locale is pools.

Pools are the deepest, slowest moving section of a stream. Think of what would make a perfect swimming hole for people.

In terms of trout, they offer security and comfort, with fish able to find spots to rest or be active all in one area.

The head of the pool – where water enters the deeper section – often holds actively feeding trout, for example, as does the downstream end, or tail of the pool. The center of the pool is often the deepest, coolest section of a stream and gives place seeking to rest a place to do so.

That deep water is where hatchery trout in particular – used to being raised in crowded raceways – often huddle in groups, at least initially.

To fish a pool, cast upstream and let your lure, fly or bait ride the current. Be sure to use enough weight when fishing the deepest part of the pool to get your presentation down to where the fish are.

Aside from pools, look, too, for runs.

A run is a place where the stream or river narrows. That might because of boulders, banks crowding together, log vanes or other man-made habitat improvements or something else. They offer deeper, usually fast-moving water, but not so much as to make a pool.

Trout hold in runs, hidden around whatever structure is available, to nab food as it floats by. These areas are effectively fished with spinners, spoons and streamers, as well as bait.

Then there are riffles.

Imagine what a paddler would think of as a rapid: a stretch of river marked by white, frothy water pouring over and around boulders. A riffle is a rapid in miniature.

They exist in areas of shallow water. But they also contain “pockets” of deeper water, and that’s where trout lie.

Look for riffles just in front of or behind a rock or other obstruction. Note how the current breaks on those obstructions, with most going around to the sides.

Trout hold in the calmer water behind those rocks, out of the current. In doing so, they minimize the amount of energy they have to expend while keeping themselves available to dart out one direction or the other to grab food as it floats by.

Again, cast upstream so that your bait, lure of fly drifts by those pockets.

Another area to target is anywhere that a smaller stream flows into a larger one. The mouths of those tributaries generally provide colder, oxygen-rich water. They become especially important as the season progresses and the water warms.

In all cases – no matter where on the stream – trout anglers would be wise to take a lesson from their bass fishing brethren and look for structure.

Everyone who chases largemouths and smallmouths knows to cast around rocks, logs, trees, docks, weeds and such. Those are prime spots for predatory bass to launch attacks.

Similarly, trout use cover to both hide from predators and to attack prey. A run with an overhanging bank, a pool with a downed tree in its midst, boulder just downstream of a tributary mouth, all are prime locations to find trout.

Finding them requires some leg work. State fish agencies do a pretty good job these days of telling anglers what waters are getting fish, and in what stretches.

It’s up to fishermen and women to get on those waters and take it from there. No one ever catches trout at home or just by consulting stocking lists, not outside their dreams anyway.

So hit the water. Spring – and its trout – are waiting.

How to get in on the trout action

OK, so you know where to look for trout.

The next question then is, how to catch them?

Here are some suggestions: