The life span of hiking boots and more outdoor news

What size line is the right one for your spinning reel? You can find the answer on the reel itself. It identifies the size line it can handle, say 4- to 8-pound test, as well as how much line it accommodates. Abide by those numbers. Spinning reels are meant for lighter line and smaller baits. It’s what makes them so good not just for trout and panfish, but also for using finesse presentations for larger species. Overload them with line that’s too heavy, or too much of it, though, and it will fly off the front of the reel in circles. Then you’ll lose time fishing as you clear snarls and snags. 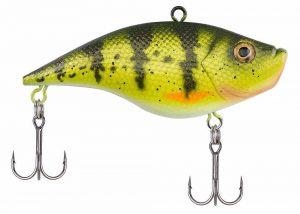 Technique: Lipless crankbaits are well known as a great late winter/early spring, cold water lure for bass and other species. The Warpig, a sinking version, offers maximum vibration and aggressive action, wobbling side to side on the retrieve. It also features plenty of fish-attracting noise courtesy of its internal rattles. Fish them on a steady retrieve, but don’t be afraid to sometimes give it an up and down, yo-yo-like action to trigger strikes, too. Smaller sizes work better in spring than do big ones, as the naturally-occurring baitfish at that time is likewise young and small.

Notable: One thing that separates the Warpig from many other lipless crankbaits is its blunt nose. It’s flat by design. The idea is that the lure will deflect off structure – stumps and wood are great to target early in the year, as they soak up heat — rather than get snagged. Also throw it around rocks and weeds, ticking it off the top of the structure and snapping it as needed to keep it moving.

Buy a set of tires and you generally get an idea of how long they should last, mileage-wise.

But what about hiking boots?

They’re basically tires for your feet, meant to carry you over all kinds of terrain. How long should they last?

That varies, depending on a number of things.

How well they’re built to start with is a factor. Boots with rubber toe caps and heels last longer than those without, for example.

How well you care for your boots matters, too. At a minimum, you should knock off any mud when you get home. That prolongs the life of materials used in construction. Washing the boots with a bit of warm water helps even more, as does treating those made of leather.

Still, like even good tires, boots wear out eventually.

That’s a lot of walking.

Some University of Wyoming research determined that the average person takes 10,000 steps in every five miles. So 500 miles of hiking equates to one million steps. Get your boots up to 1,000 miles and you’ll have covered about two million steps.

So head out on the trail. You’ve got a lot of steps in you, or at least your boots.

Check this out, too: Hiking with children can be fun, memorable if you do it right