Outdoor extras, including a note on fishing plastic worms 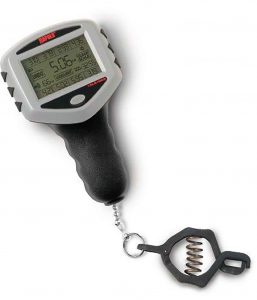 Product description: Maybe you’re a tournament fisherman. Maybe you’re just someone who likes to know the specifics of the fish you catch. In either case, the Rapala touch screen tourney scale is a nice tool to have. It’s large digital touch screen allows you to calculate and store the weights of up to eight fish at a time. It displays a running total of those fish, too, so you can tell the weight of your cumulative bag. It also displays the current air temperature and has a back light to illuminate the screen.

Available options: Powered by two AA batteries (not included), the scale will run up to 400 hours. And if the batteries go dead, the scale’s backup memory retains your stored data until you get new ones.

Notable: The scale is accurate to within 1 ounce, plus or minus.

Plastic worms are one of the most popular baits among bass anglers. And for good reason: they catch fish. You can get even more fish to strike, though, if you slow things down. Crankbaits, buzzbaits, spinnerbaits, those are all lures you work with some speed. But plastic worms perform best when fished ever so slowly. One way to do that is to only move the worm with flicks of the wrist, rather than sweeps of your entire arm. It’s all about subtlety.

Recipe of the week

This is a recipe handed down from an anonymous but devoted morel hunter.

Boil the morels for 2 minutes in water. Drain them immediately, then remove and chop the stems. Combine those with the breadcrumbs, chives, garlic, wine, cheese and sausage, with how much you use of each ingredient driven by your own tastes.

Take that stuffing and use it to fill the morel caps.

Place them in a casserole dish and drizzle with the melted butter. Bake at 350 degrees for about 20 minutes or until the sausage is done.