Hiking through the sky, below it at Kinzua Bridge State Park Be warned: if heights set your knees to knocking, this is one hike that will involve plenty of trembling.

After all, they don’t call it the “skywalk” for nothing.

The trail leading from the visitor center at Kinzua Creek State Park is innocent looking initially. It’s paved, surrounded by mowed grass, giddy with the high-pitched laughter of children on weekends.

Then you get to the bridge.

It was built originally to carry railroad cars across the chasm that is the Kinzua Creek valley. These days it takes visitors out about 600 feet – not quite a third of the way across — to an observation deck offering spectacular views. They’re especially breathtaking in autumn, when the surrounding hardwood-covered hills are ablaze in color.

But you’ve got to be comfortable with heights to take it all in.

That deck stands 301 feet high, the equivalent of a football field turned on end. And it has a see-through glass floor in the center. 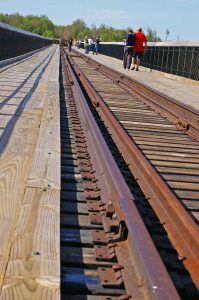 If that doesn’t make you queasy, and it does some, the way the bridge sways in the wind as you walk out and back just might.

But it’s worth the uneasiness. The bridge, the observation platform, the sights, they’re all amazing. This is a rustic, rural, sometimes remote part, lovely of Pennsylvania, and the park and bridge lie in the heart of it.

Yet, beauty had nothing to do with the bridge’s creation.

That was all about necessity. Or rather, necessity and fearless ingenuity.

The year was 1881 and Thomas Kane had a problem. He was a Civil War veteran, one who bore the scars of that conflict. He walked with a limp because of one injury and wore a full beard to hide the disfiguration resulting from another.

Kane was no shrinking violet, though. An ardent abolitionist before the war and an advocate for women’s civil rights after, he was president of the New York, Lake Erie and Western Railroad Coal Company.

And he was a big thinker.

His railroad existed to fill one role: move coal, oil and timber from these very same hills to markets in Buffalo to the north.

The Kinzua Creek Valley was in his way. Not only deep but wide – it spans nearly half a mile — it was an obstacle impacting the bottom line.

He appeared to have two choices. One, detour his railroad eight miles around the valley. Two, cross the valley by descending down one side and climbing the other in a slow, costly zigzag pattern.

Instead, he tasked some of the nation’s leading engineers with building what was then the tallest and longest railroad bridge the world had ever seen. Dubbed the Kinzua Viaduct, people quickly labeled it the “eighth wonder of the world.”

Thanks for all that goes largely to two men. The Kinzua State Park visitor center tells the history of the area and the men who built its famous bridge.
Bob Frye/Everybody Adventures

Adolphus Bonzano designed the bridge. He pioneered what came to be known as “Phoenix columns.” Hollow, wrought iron columns held together with rivets, they proved capable of withstanding strong winds like those buffeting tall structures.

Meanwhile, Octave Chanute figured out how to get trains safely across the structure. Speed, or rather lack of it, was the answer. He determined locomotives would be fine so long as they didn’t top 5 miles per hour.

Kane put them and their team to work.

It operated as is until 1900, when more powerful locomotives capable of pulling more and heavier rail cars became the norm. Then it underwent renovation.

Crews demolished the Phoenix towers and replaced them others made using 6.7 million pounds – or close to 3,400 tons – of steel.

Reborn that way, it remained in service for nearly six decades more. The last commercial train crossed the viaduct in 1959.

Still, that didn’t signal its end. State officials created Kinzua Bridge State Park in 1963, and starting in 1987 tourist trains carried visitors from one rim of the valley to the other.

Then, Mother Nature stepped in.

A routine inspection of the bridge in June of 2002 determined its steel columns were rusting through. Train traffic halted in August.

“Engineers determined that high winds could create lateral pressure on the bridge. The wind hitting the bridge could shift the center of gravity, increasing the weight on one side. Such an event could send the whole bridge crashing to the bottom of Kinuza Creek Valley,” reads information from the park.

Repair crews started refurbishing the bridge in February of 2003. They fled in July at word of an approaching storm.

That storm turned into a tornado featuring winds of up to 112 miles per hour. It lifted 11 of the bridge’s 20 towers from their moorings and sent them crashing to the valley floor. 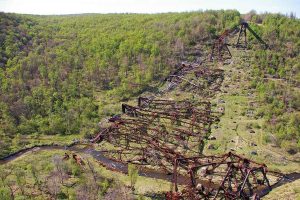 In 30 seconds, the bridge disappeared.

Most of it, anyway. It remains, in part, for hikers.

Pennsylvania’s bureau of state parks rebuilt the part of the bridge leading to the “skywalk” platform. It left the rest lying on the ground in what’s known as the “debris field.”

Hikers can follow one trail from the visitor center to the platform and another – about one mile long, round trip – to the debris field, to get a view of the bridge from below.

That latter hike presents its own challenges. It switchbacks its way to the bottom, on gravel and dirt, with each step a reminder why Kane preferred crossing the valley to negotiating it.

“Hikers on the Kinzua Creek Trail,” a sign at the trailhead reads, “should be in good physical condition, wear sturdy boots, and use caution due to steep trail sections.”

The heart of the debris field is off limits. A mix of twisted metal and old concrete, with the occasional rattlesnake, it’s closed to entry.

But the view from below is just as magnificent as the one from above.

Kane, with his lingering injuries, might have struggled to cover this ground. Then again, he would probably have found a way.

And the marvel that is his bridge remains today for people willing to do the same. 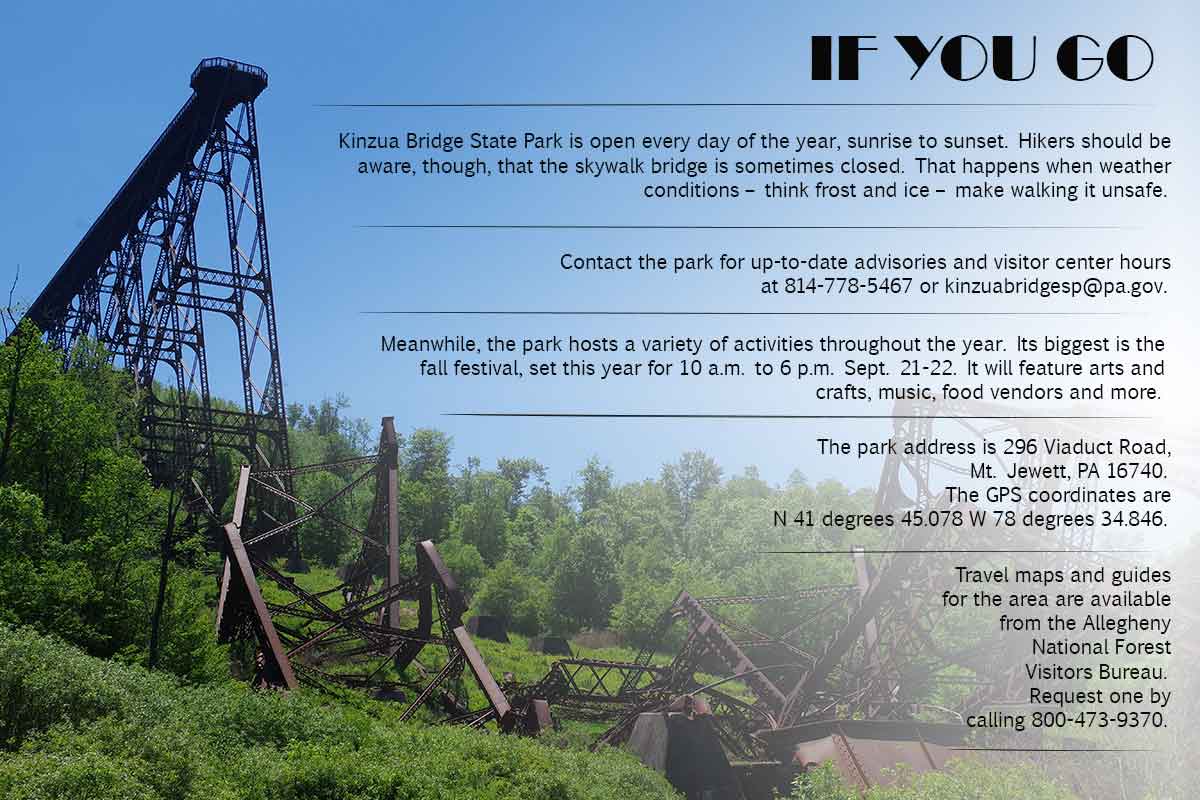 Kinzua Bridge State Park, seen from the debris field below, is worth visiting.
Bob Frye/Everybody Adventures