Hiking safety key no matter how short the trip 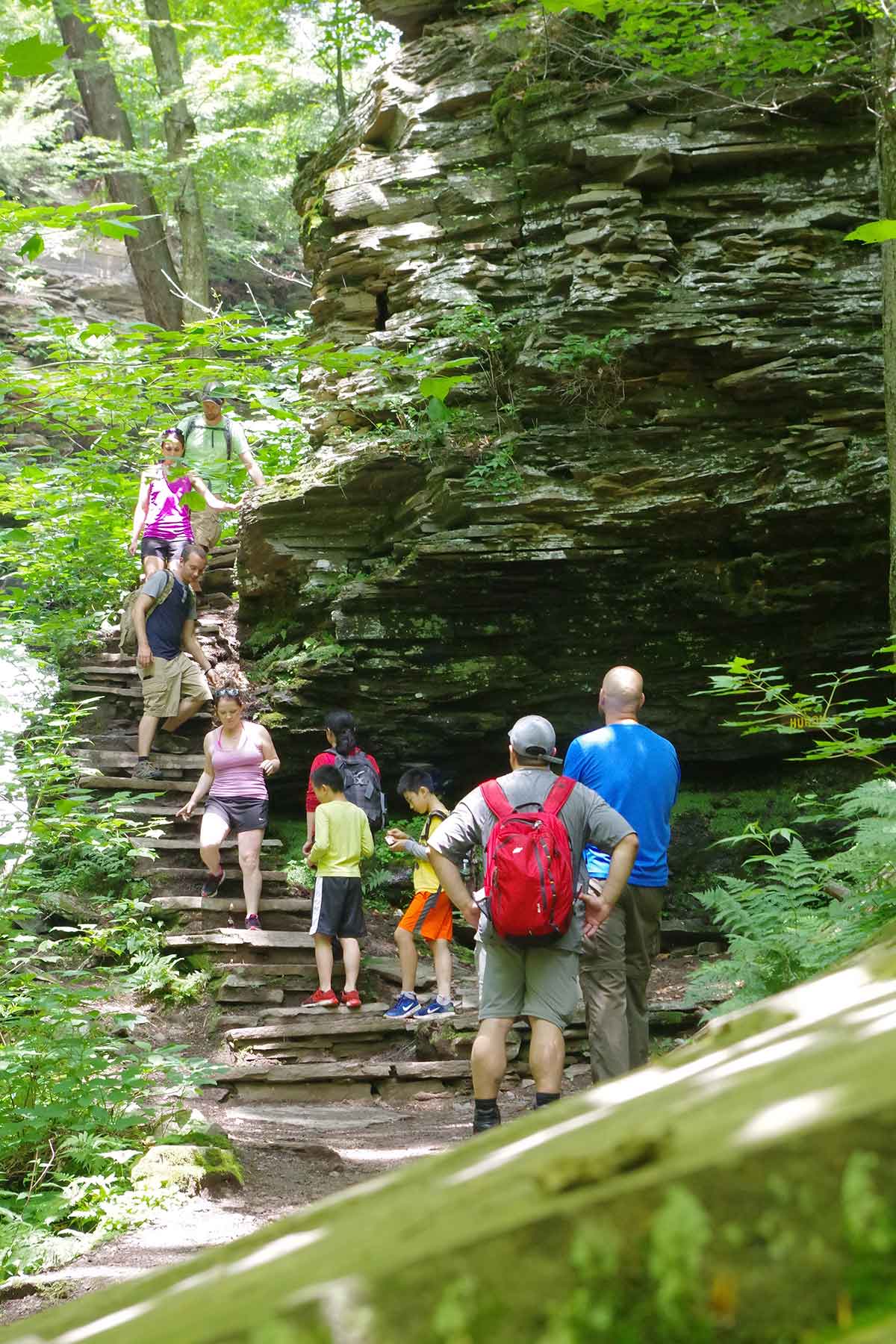 Some hikes challenge because of terrain or other factors. So hiking safety is important to consider any time you go out.
Bob Frye/Everybody Adventures

It’s not who you think it is.

Each year, park and forest rangers, volunteer firefighters, emergency medical technicians and other search and rescue personnel take to the woods to save people in dire straits. There’s never a shortage of them.

Yet rarely are the rescued backwoods wanderers, exotic, high adventure explorers who roamed far afield on purpose, carrying all of their supplies on their back or in their canoe.

Those folks certainly venture into wild places, the kind remote enough to be dangerous. But they’re generally ready to do so.

Day hikers are not.

They’re moms and dads, teens and younger children, young adults and senior citizens who intended to spend just a few hours hiking in the woods but instead found themselves in trouble.

“That’s exactly what we see,” said Ryan Dysinger, assistant director of Pennsylvania’s bureau of state parks. “It’s day hikers who underestimate the time needed to complete a hike and run out of daylight, or encounter bad weather, or get turned around and lose their way. They account for most of our search and rescue cases.”

And that’s not unique to Pennsylvania.

For example, each year, forest rangers from New York State’s Department of Environmental Conservation conduct about 200 searches for lost or stranded people. Most involve people just out for the afternoon.

In one case, rescuers helicoptered a 25-year-old female overcome by heat stress to a hospital. Another involved two boys, ages 14 and 15, separated from their group. A ranger located them and walked them out to safety. In a third, a 29-year-old woman walked the wrong way on a trail. She wound up hiking two miles away from her vehicle instead of toward it.

“At this point she called 911 stating she was lost, dehydrated, and had used the last of her water,” reads a rescue report.

Forest rangers used coordinates from her cell phone to locate and get her out of the woods.

Such cases are typical.

Smokymountains.com, a tourism agency for Great Smoky Mountains National Park and the surrounding area, analyzed more than 100 news reports “to discover how people get lost in the wild and the lengths they go to in order to come back alive.” The resulting report, “Safe & Found,” looked at cases from all across the country.

Not all the lost were hikers. But many were.

The reasons people get lost, whatever the activity, are predictable, the report said.

Forty-one percent simply wandered off trail and didn’t know how to get back. That was the most common reason.

It doesn’t take rescuers long, in most cases, to help them.

“Hasty searches” — often measured in hours and involving only one or two rescuers — are most common, said Nathan Fite, forest program specialist with Pennsylvania’s bureau of forestry.

And on occasions, rescuers don’t even have to enter the woods, he added. They reach a lost but uninjured hiker via cell phone and tell them how to get back themselves.

“It’s fairly rare anyone has to spend a night in the woods,” Dysinger agreed.

That’s a good thing, he said. Because few of those requiring rescue carry the gear necessary to take care of themselves should help be a longer time in coming.

“The number one mistake I see is lack of preparation,” Andrew Herrington, a survival instructor with BigPig Outdoors, told smokymountains.com after examining its data.

Consistently, Fite agreed, most of the people rescued by Pennsylvania park and forest rangers have no maps, food or water, rain gear, flashlight, or knowledge of where they are and how long it might take to get where they are going.

Technology seems to be playing a part in that.

Fite said many lost people put too much faith in their phone, specifically its GPS. That leaves them stranded when batteries die or signals fail.

“Preparedness is what it comes down to. That’s the key for most anything,” Fite said. “And usually you’re finding the people who aren’t prepared.

That oversight can have severe consequences.

“In the stories we looked at, survival often hinges on the ability to find a combination of four basic things: warmth, shelter, food and water,” smokymountains.com said. “But in the wild, faced with extreme conditions, injury or unfamiliar surroundings, these basics can be hard or impossible to find.”

In some of the cases examined, people spent just a day lost. Others were on their own for as long as a week.

In one extreme case, a 44-year-old man spent 90 days lost in Quebec.

Sometimes they resorted to radical steps to survive.

According to the report, those with no way to treat water, for example, risked giardiasis, extreme diarrhea caused by a parasite. But lost people feared that less than the more immediate danger of dehydration.

Six percent drank their own urine.

Others sheltered in caves, ate bugs – even the dog that helped them fight off a bear in one case – and relied on the body heat of friends to stay warm.

Yet, there’s no need to do any of that, Herrington said in the report. Just packing some basic equipment – think the 10 essentials – while paying attention to weather, knowing how to build a fire and more can all assure survival when a day trip goes sour.

Also, hikers should pay attention to signs and kiosks at trailheads and the information on maps, Dysinger said. They describe trails, for example, and identify their length and difficulty. They also highlight any specific gear needed to complete them.

“So obviously the onus is on the individual to heed all of those warnings. Sometimes they do not, unfortunately. Those are situations where we have to go out and kind of get them back in,” Dysinger said.

“But the real key is, if you’re a hiker or whatever, you need to be prepared for what you’re getting yourself into.”

Any hike – no matter how long or short — should start with packing the “10 essentials.”

Those are the things every hiker should carry at a minimum. Of course, you can add additional items if you want, to meet personal needs.

But the essentials are just that, things you should never leave at home. They are:

Meanwhile, New York’s Department of Environmental Conservation offers a lot of information on hiking safety, too. They are based on its long record of conducting search and rescue missions. It includes a brochure on how to avoid getting lost and what to do if it happens anyway.

Likewise, Pennsylvania’s Department of Conservation and Natural Resources has a wealth of information. It showcases not only what trails to hike, but what to pack when on them, what to wear and more. See it here.

And the American Hiking Society, the nation’s largest hiker advocacy group, has its own accounting of the 10 essentials. View it – and get information on things like planning a hike – here.

Finally, for a detailed look at who survives getting lost and how, check out smokymountains.com’s analysis “Safe & Found.” It includes some really good information on how to prepare for a walk in the woods.

After all, the idea is not just to enter the woods, but to get back out, too.

So go hiking. There’s a lot of beautiful country full of amazing sights and gorgeous wildlife to see.

Just be smart about it.