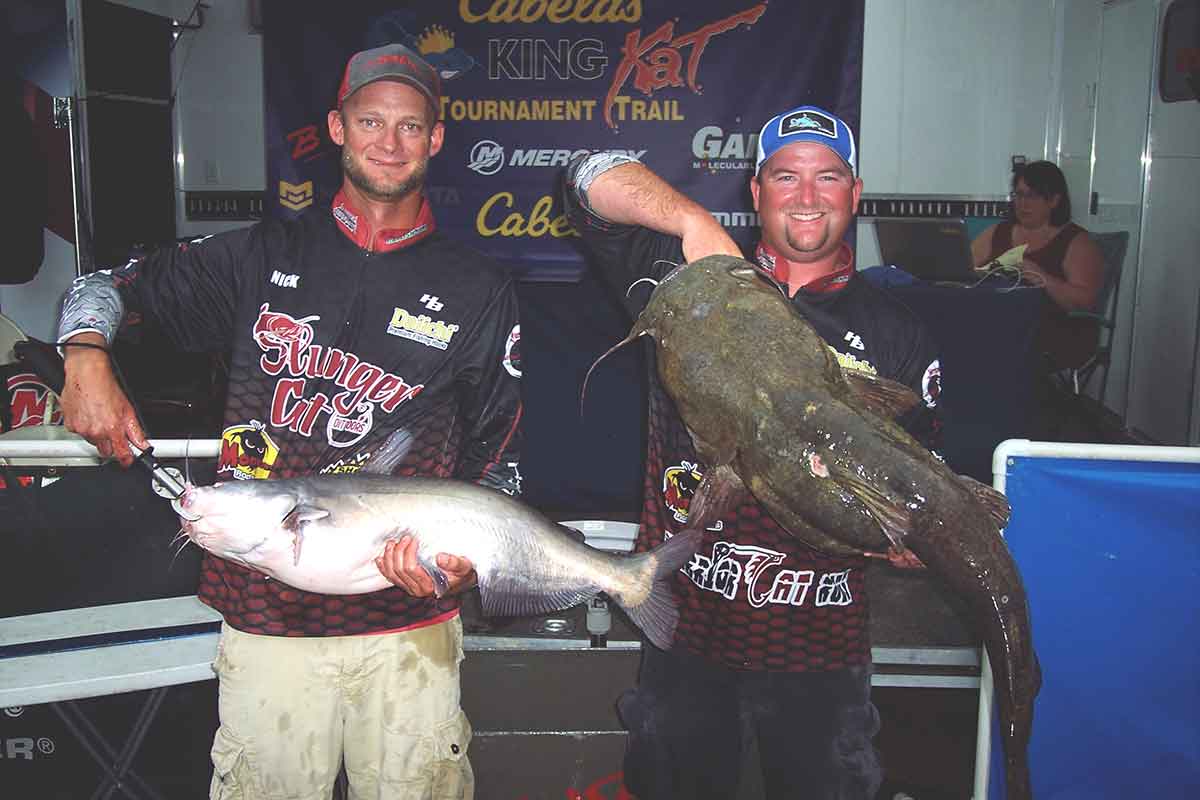 We’re on the cusp of one of the great ones.

So says Chris Souders anyway. And he should know. The Ohio-based angler is a two-time Cabela’s King Kat tournament series angler of the year and host of Slunger Cat Outdoors on Youtube.

But prime time won’t last long. Souders said the peak springtime flathead bite usually only stretches a month or so, from the second week in May until, at the latest, mid-June.

What an experience it can be, though.

“I love flatheads,” Souders said. “I love catfish period. But my go-to, absolute favorite fish to catch is the flathead.”

It’s no wonder. They grow big: the all-tackle world record is a 123-pound fish caught in May of 1998 in Kansas’ Elk City Reservoir.

Fish of 30 and 40 pounds are common, though, pretty much all across the flathead’s range. That extends from the East Coast to nearly the Rockies and from the Great Lakes south to the Gulf of Mexico.

Fortunately, Souders said there are only a couple of things anglers need to know about the big cats this time of year. That’s what they need and what they want.

The need is easy to identify.

“It’s really simple. We don’t want to overthink it,” Souders said. “They only really need one thing, and that’s food.”

And that means big bait.

“Unlike other catfish, which are scavengers, flatheads prey only on live fish,” according to Texas Parks and Wildlife. “Young flathead catfish feed mostly on invertebrates such as worms, insects and crayfish. When 10 inches or larger, their diet consists entirely of fish: shad, carp, suckers, sunfish, largemouth bass and other catfish, including their own kind.”

Souders goes after them accordingly.

Flatheads in spring are “just waking up” from a winter of little activity, he said. They want to eat, in a big way. So this is no time for experimentation.

So he uses both live bait and cut bait. But always, he relies strictly on certain kinds: gizzard shad, bluegills, creek chubs and suckers.

There’s a reason for that.

Gizzard shad are prolific breeders. According to the Pennsylvania Fish and Boat Commission, an average female can lay 300,000 eggs at a time, and some up to 500,000.

They quickly grow too big for all but the largest predators.

Nature has a way of controlling their numbers, though. That’s large-scale spring die-offs. It’s not uncommon on waters with gizzard shad to find them floating belly up by the hundreds or thousands in the weeks and months after ice out.

It happens all over the country, wherever gizzard shad swim.

“We want to take advantage of that,” Souders said.

Bluegills are his second choice for spring flatheads. But for whatever reason, they’re one too few anglers use, he believes.

“They’re easy to keep alive. They’re hardy. And they are feisty,” Souders said.

As for what flatheads want, Souders said that’s comfort.

Flatheads need to eat. What they want, he said, is to do it in areas of relatively warmer water.

“Good places to find that are creek mouths, shallow flats, where the main water channel meets a backwater area, where there’s a seam along dams. Those are all good,” Souders said.

That’s a bit different from where fish will be later.

Flatheads are ambush predators. So, in the warmest months of the year, they like deep pools with slow current and cover like submerged logs and brush piles, according to the Ohio Division of Wildlife.

In spring, though, Souders catches them in two to 12 feet of water. It warms up faster than the deeper main river channel or lake body, a fact that attracts baitfish. That in turn draws predators, including flatheads.

If there’s structure at such a spot, he’ll target that first, he said. If there isn’t, he might look for seams, or places where warmer, shallower water meets colder, deeper water.

“They have nowhere to go. And all the predatory fish are going to go right to them,” Souders said. “That’s going to be some of the best fishing you can ever have.”

Find bait, in areas of relatively warmer water, and you’ll find flatheads. Then, give them what they want in as natural a way as possible.

“Any time you go against Mother Nature, she’s going to prove you wrong,” Souders said. “But if you listen to what she tells you the fish want, and go and present that as naturally as you can in the right areas, you’ll have success.”

A closer look at flatheads

Here’s a look at the life history of flathead catfish.