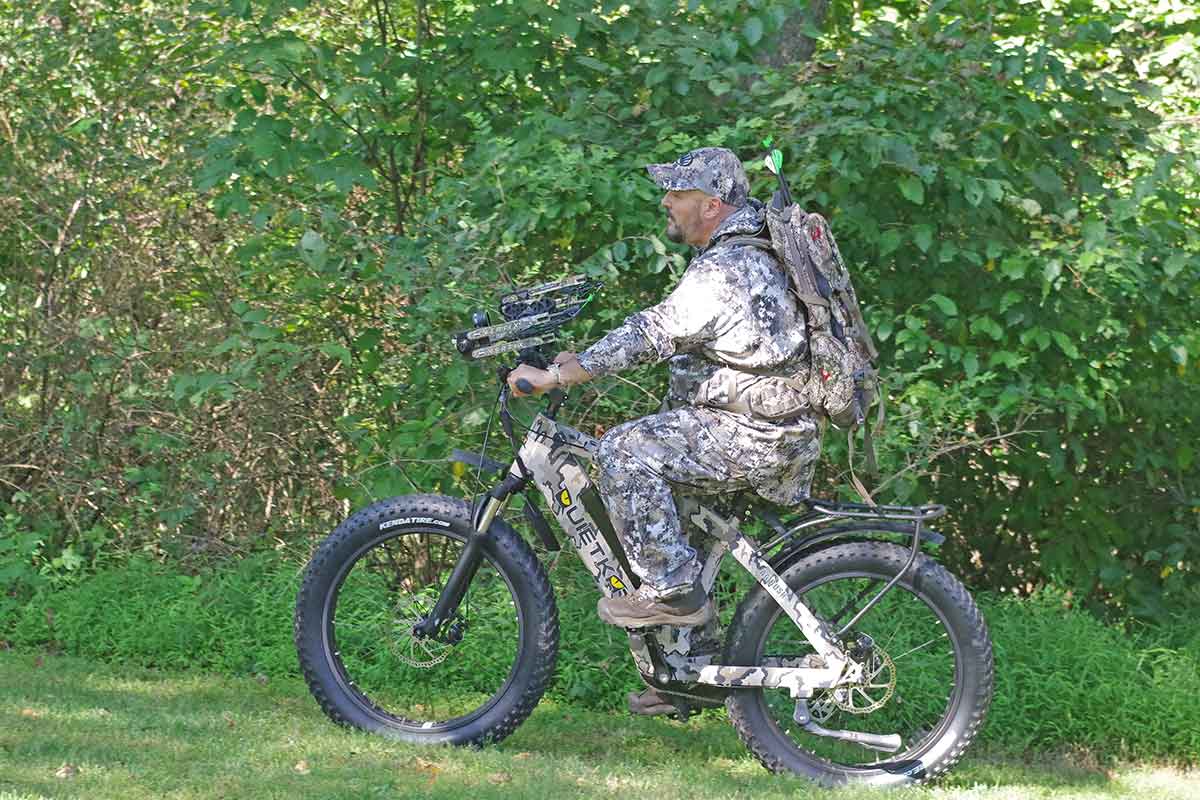 Jack Brown, a brand ambassador for QuietKat, rides an e-bike. His has a rack for his bow or rifle on the front so that he can use for hunting.
Bob Frye/Everybody Adventures

The very thing that makes them so attractive is what has some people worried.

E-bikes, or electric bicycles, sport pedals like traditional bicycles. But they also have electric motors.

Land managers and lawmakers categorize them as either class 1, 2 or 3, with the difference largely dependent on whether the motor can operate without pedaling.

The attraction in all cases is that the bikes allow people to ride further faster with less difficulty. That’s made them increasingly popular with everyone from traditional cyclists to hunters and anglers.

Kyle Stokes, owner of Swatara Creek Outfitters, an archery pro shop in Anville, Pa., is an avid e-biker. Now 44 years old, he’s hunted since he was 12 and cycled since he was 16.

He still rides traditional bikes, he said. But his favorite thing to do is travel miles deep into state forests and game lands to bowhunt for white-tailed deer.

These days, having undergone five complete hip replacements, the only way he can do that is with an e-bike. His allows him to get himself and 75 to 100 pounds of gear where he needs to go

Other hunters – with physical limitations and without – could potentially do the same if e-bikes were more widely permitted, he said.

“I do think they would be a great mobile device,” Stokes said.

But that’s the issue.

In August, the Department of the Interior released “Secretarial Order 3376.” It requires the U.S. Fish and Wildlife Service, Bureau of Land Management, National Park Service and Bureau of Reclamation to permit e-bikes on any trail allowing traditional bicycles.

“As more Americans are using e-bikes to enjoy the great outdoors, national parks should be responsive to visitors’ interest in using this new technology wherever it is safe and appropriate to do so,” said National Park Service deputy director P. Daniel Smith.

Backcountry Hunters and Anglers, the Wilderness Society, National Wildlife Federation and even a number of mountain biking groups are among those saying that e-bikes shouldn’t be regulated the same as traditional bicycles.

But they are a “hybrid technology,” neither motorized vehicle nor traditional bike, he said. So land managers should be able to decide where they are and aren’t permissible on a local basis.

“I think we’re really just interested in making sure that e-bikes are allowed where it’s appropriate, but that they are not managed as precisely the same as traditional bicycles. Because they really are their own thing,” Geltman said.

The controversy, and confusion, extends to lands owned by states scrambling to catch up with e-bike technology, especially in relation to hunting.

But existing rules do prohibit operating a motor vehicle on anything but designated roads in state parks and forests, she said. Others prohibit hunting from a motor vehicle.

Meaning, with e-bikes classified by law as motor vehicles, cyclists can’t use them to explore public land or hunt anywhere.

In Ohio, hunters can’t use any kind of bike – motorized or otherwise – to hunt on public land, said John Windau, wildlife communications manager for the state’s Department of Natural Resources.

Hunters can use motorized bikes on private land to transport deer they’ve killed, but they can’t “hunt” from one like they can a non-motorized bike.

In Pennsylvania, lawmakers – via Act 154 of 2014 – classify e-bikes the same as traditional bicycles. As a result they can be used anywhere traditional bikes are allowed, including on bike trails in state parks and forests.

But that doesn’t extend to state game lands, maintained for wildlife and hunting by the Pennsylvania Game Commission.

The commission liberalized its list of approved mobility devices permissible for use by hunters with a disabled persons permit in recent years. That’s how Stokes is able to use his e-bike.

But they’re off limits otherwise.

For now, anyway. With e-bike interest growing, an internal commission committee is looking at how to adapt.

Jason Raup, the commission’s assistant legal counsel, said the group initially looked at treating e-bikes the same as non-motorized devices, such as horses and traditional bicycles. That created unintended consequences, though.

So instead, it’s leaning toward making them a new category of motorized vehicle.

But Raup she intent is to legalize only class I bikes, though. And that could be a problem.

Almost all of the class I bikes on the market are made for riding on developed bike trails, beaches, boardwalks and the like, said Jack Brown, a Westmoreland County, Pa.,-based brand ambassador for e-bike manufacturer QuietKat. Manufacturers don’t make them for taking hunters through the woods, he added.

Indeed, the outdoor television shows helping to popularize these all feature class II bikes, he said.

The commission, he said, needs to understand that. Otherwise it’s going to legalize a class of e-bike with no real-world application for hunters, he said.

“They’re going to back themselves into a corner and legalize this and nobody’s going to be able to use anything,” Brown said.

He’s hopeful the agency will reconsider. E-bikes are simply a tool, Brown added. But he believes they are one the commission would be wise to take advantage of.

The Game Commission, like similar agencies all around the country, is struggling to maintain its license-buying base. R3 – or recruitment, retention and reactivation – is a huge point of emphasis.

E-bikes, Brown said, far from being hurtful, can help the cause by making it easier for an aging hunter demographic to do its thing.

Raup said the commission hopes to roll out some proposed e-bike regulations in January. Opportunities for public comment will follow. 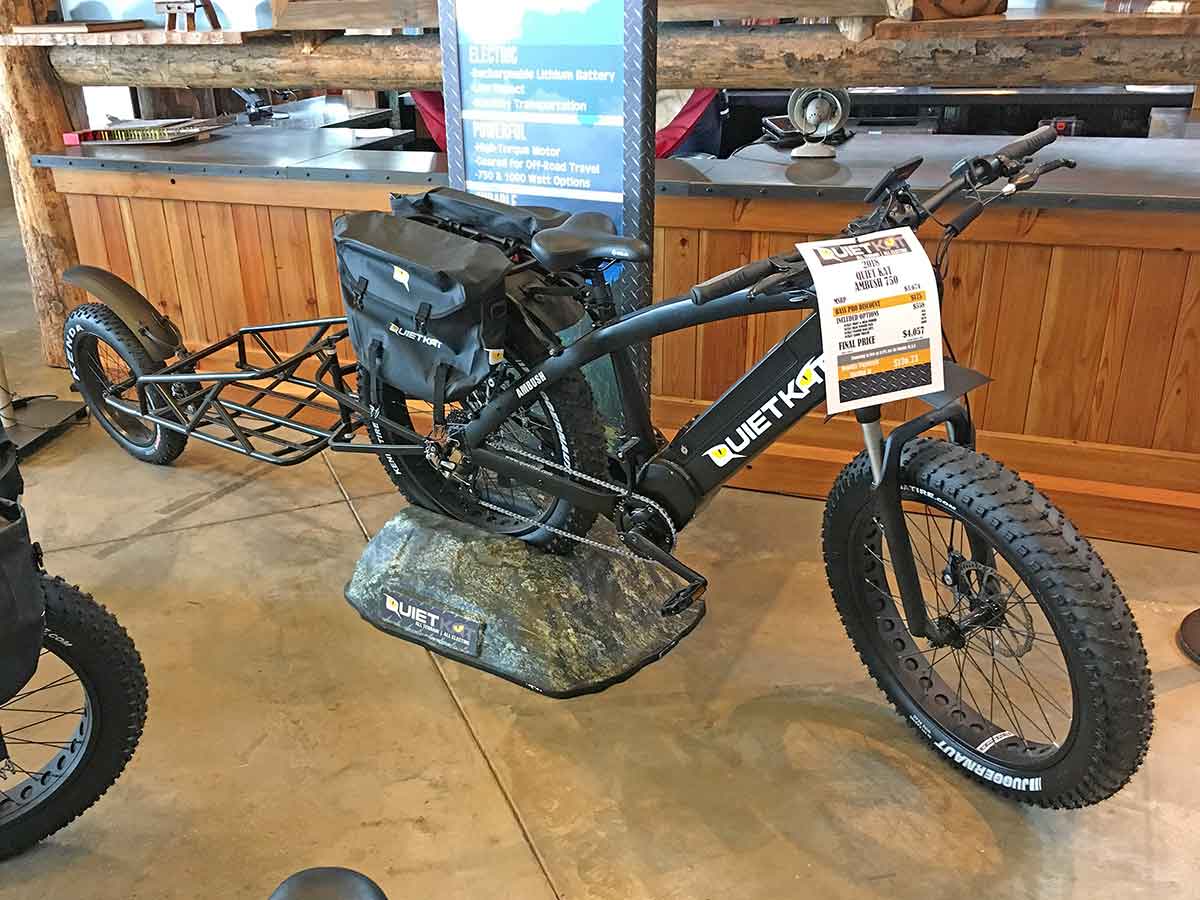 E-bikes can be outfitted with trailers for hauling gear and game.
Bob Frye/Everybody Adventures

Breaking down e-bikes by class

So what separates one e-bike from another?

The group People For Bikes breaks it down this way:

CLASS 1: Bicycle equipped with a motor that provides assistance only when the rider is pedaling, and that ceases to provide assistance when the e-bike reaches 20 miles per hour.

CLASS 2: Bicycle equipped with a throttle-actuated motor. It ceases to provide assistance when the e-bike reaches 20 miles per hour.

CLASS 3: Bicycle equipped with a motor that provides assistance only when the rider is pedaling. It ceases to provide assistance when the e-bike reaches 28 miles per hour.