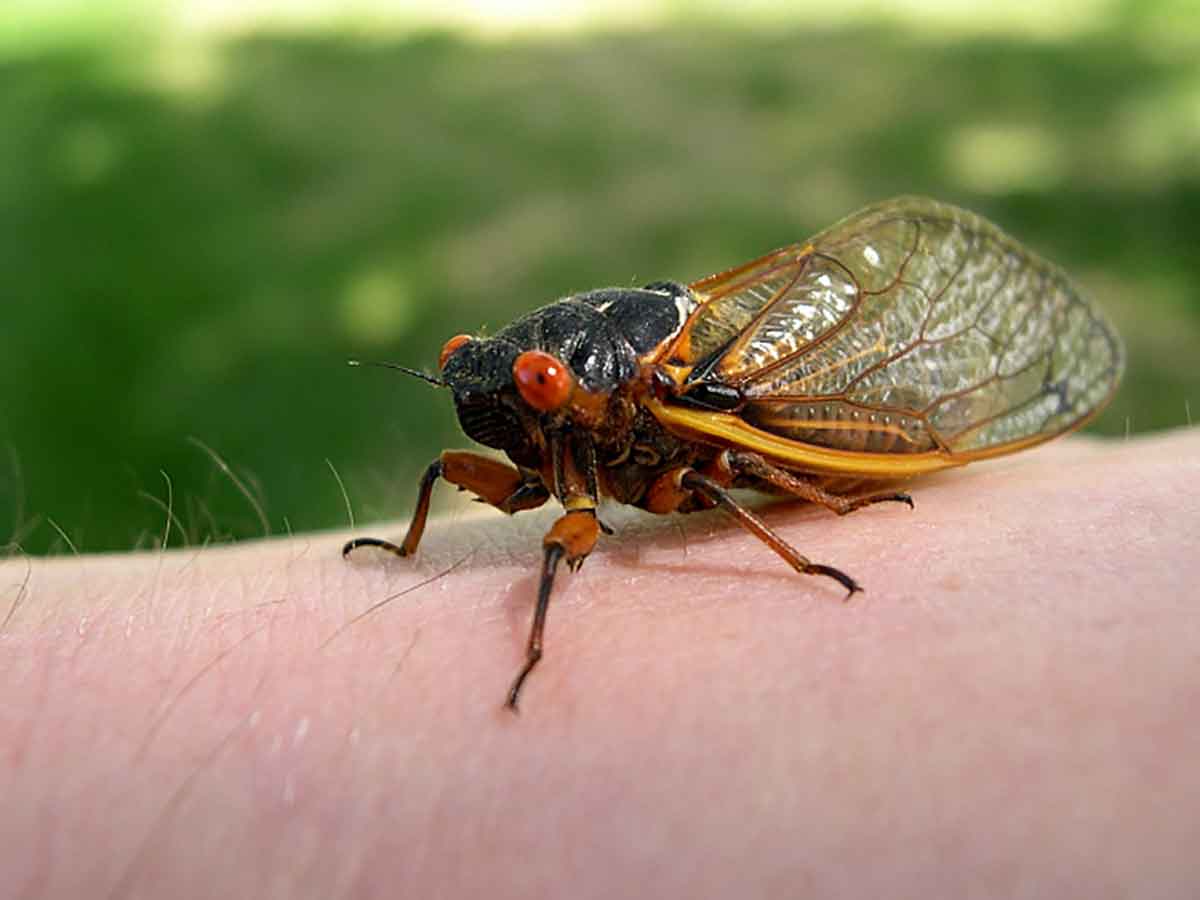 They will fascinate some and annoy, likely even creep out, others. That’s just how it is with bugs and people.

So it will be with periodical cicadas.

Fish will love them, though. And so, too, will smart anglers.

For both, the mass emergence of the insects – something that’s going to begin any day now – is a time of plenty.

What’s known as brood VIII emerges just once every 17 years. This is that year, in eastern Ohio, northern West Virginia and western Pennsylvania.

It last appeared in 2002. It won’t appear again until 2036, according to cicadamania.com, which tracks sightings, locations and more.

Cicadas spend most of their life an inch or so underground. And when they leave, it’s for one purpose: to make new cicadas.

That’s a survival strategy. Were cicadas to emerge annually, in consistent numbers, predators would key in on them, Davidson said.

“But if you come out in enormous numbers, unpredictably after 17 years, when the predator populations aren’t all that large, they can eat until they’re stuffed to the gills and can’t eat anymore and two-thirds of you are still left alive to mate and lay eggs and produce the next generation,” he said.

“In other words, you produce more individuals than all the predators taken together can possibly eat.”

The exact timing of their emergence is tied to weather. They leave the ground when it is consistently 64 degrees or so.

Historically, that meant mid-May, though climate change makes it hard to predict with any certainty lately, Davidson said. They live until late June or so.

Before that happens, males fly into trees and form “chorus groups,” singing to attract females. Populations can be dense.

Some locations may see 1.5 million cicadas per acre, Davidson said.

“Now, usually it will be less than that. But it can still be pretty spectacular,” he noted.

Cicadas also spread out, though. One spot may see hordes of them, Davidson said, but then there may be none for a half mile or more.

Predators eat them wherever they are. Everything from birds to coyotes to frogs to squirrels devours cicadas, Davidsoon said.

So, too, do fish. And that’s got Scott Loughner excited.

A fly fishing instructor and guide from southwestern Pennsylvania, Loughner has fished cicada hatches perhaps 10 times in his lifetime by traveling to various locations. The peak of any emergence is relatively short, he said, lasting three weeks or so.

“At the same time, it should be some of the best three weeks of fishing a lot of anglers will ever experience,” Loughner said.

The bugs end up within reach of fish by accident.

“Adults are rather clumsy fliers and often collide into objects during flight,” reads information from Penn State University’s department of entomology.

Loughner said they bounce of bridges and even vehicles, among other things, falling into rivers, streams and lakes. That prompts “a feeding frenzy.”

”Once the fish start seeing them often enough, they realize that’s a lot of protein right there. And everything eats them, from bass and trout to catfish and carp. It’s everything that swims,” Loughenr said.

He ties his own surface and a subsurface cicada patterns to tempt fish.

Cicadas are light in color when they first shed their nymphal skin. Within an hour, though, they turn dark. 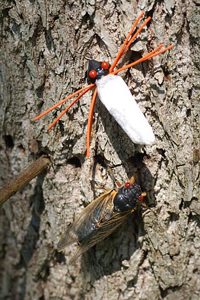 So Loughner’s surface flies have black bodies with orange underparts. They sport white and gold wings and orange rubber legs, similar to those on a bass popper. They add a bit of “shimmy,” or disturbance, Loughner said.

The subsurface flies are similar in color, but minus the legs.

He fishes for multiple species with his cicada flies. But common carp are a real treat.

Carp are not normally surface feeders, as their mouths are on the underside of their head. So to take a surface fly, they have to either lift their head out of the water to come down on top of it, or they have to roll on their side to suck it in.

“Any fish over even 10 pounds, let’s say, puts up a heck of a fight, no matter what kind of tackle you’re using. But when you hook into 20 pounds of carp on a fly rod, you’re going to have some fun,” Loughner said.

“If you’ve got a buddy with you, you might as well tell him to eat a sandwich because you’re going to be a while.’

Anglers can use spinning gear to take fish during the cicada hatch, too.

The insects get big, Davidson said. They reach about 2 inches long and a half inch wide, making them bigger than a grasshopper.

Anglers collecting live cicadas use them successfully as bait, too.

But they have to act fast.

There will be other cicada hatches in coming years. According to cicadamania, brood X will emerge in 2021, for example. Those insects will be seen from Maine to Georgia and the East Coast to Illinois.

This year’s brood is more localized. And it will disappear quickly.

But not before prompting some terrific fishing.

OK, so this year’s crop of periodical cicadas isn’t going to be around long, and you want to spend as much time as possible fishing while they’re here.

So how and where to find them?

So your ears will tell you where they are.

“It sounds funny, but the easiest way to find them is, you drive around with your window down and your head out like a Labrador. And you listen,” said Scott Loughner.

“And if you’re hearing them it’s worth investigating.”

Don’t necessarily give up on likely locations if a single drive around doesn’t produce, though.

According to Penn State, the insects – a native North American species, and the longest lived on the continent – come out in bunches.

“During some years, practically all of the population in a brood from a forest may emerge on the same night, or on two or three different nights,” it says.