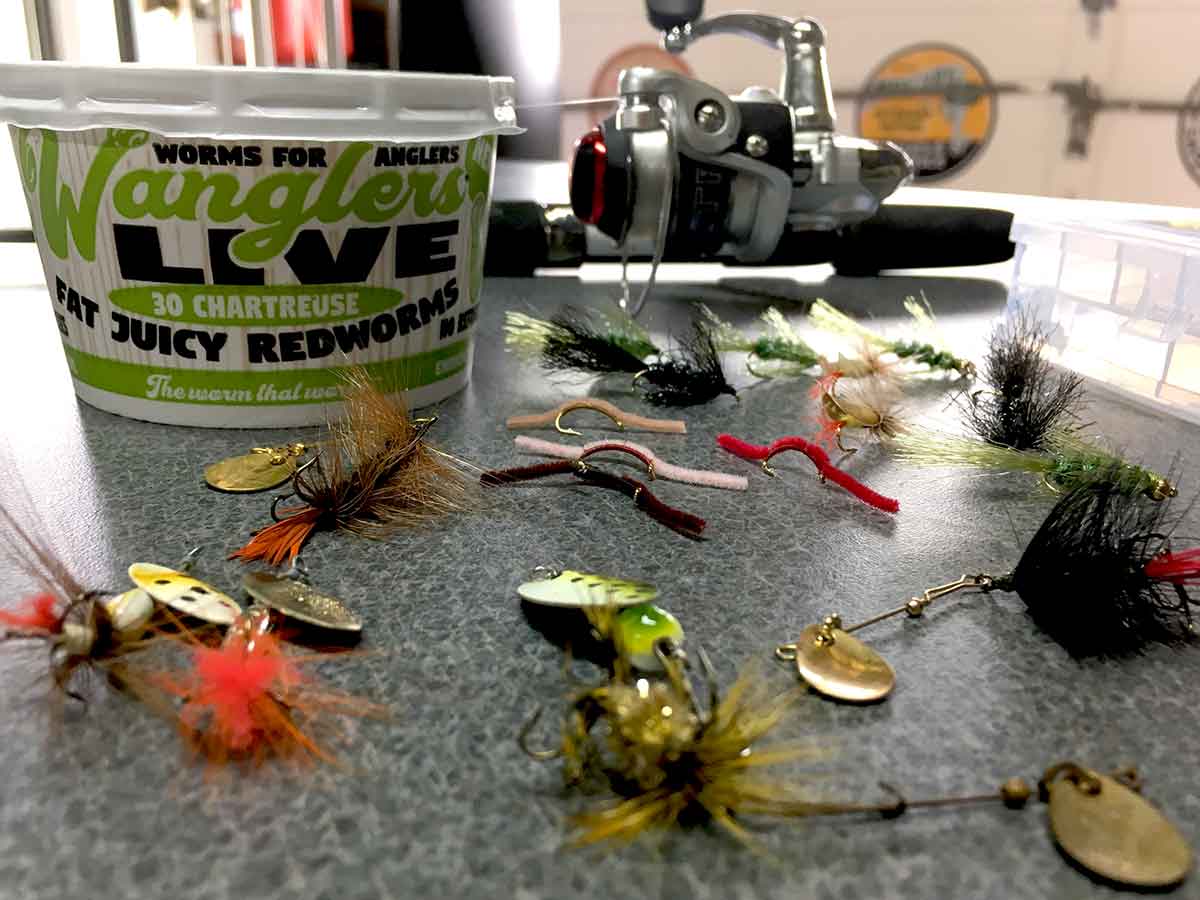 Bait, lures or flies? Biologists say all catch trout. But they’re not equally as easy on the fish.
Bob Frye/Everybody Adventures

It was, in some ways, an outrageous amount of debate for so little water.

But, finally, a decision is made. Anglers who want to fish what’s known as section 3 of Spruce Creek near Franklinsville in Huntingdon County, can do so year round.

They must release any fish they catch. And, most notably, they’ll have to do all their catching on flies or artificial lures.

No bait is permitted in section 3.

Pennsylvania Fish and Boat Commissioners this week, by an 8-2 vote, put section 3 in its catch and release artificial lures only program.

Credit its trout for that.

There are a lot of wild browns swimming in the 800 linear feet – 0.15 miles – of Spruce Creek where it flows through the former Indian Caverns property near Franklinsville in Huntingdon County.

The commission ranks wild trout streams based on the amount of fish – the biomass – within a predetermined area. Class A streams are the best of the best.

When biologists examined this particular 800 feet of Spruce Creek last summer, they discovered more than 10 times the amount of brown trout needed to merit Class A distinction.

“There are very few waters like that around,” said Kris Kuhn, chief of the fisheries management division for the commission.

The question has been what to do about it.

Indian Caverns prohibited fishing on Section 3 for decades while it operated as a commercial tourist attraction. The Western Pennsylvania Conservancy bought the land, however, and transferred the portion along the stream to the commission.

It opened to public fishing since December of 2017, managed under statewide inland trout regulations.

In April they proposed managing it under catch and release artificial lures only regulations.

That’s what all the ensuing debate was about.

There was almost universal agreement on the idea of catch and release rules. But some anglers wanted bait allowed.

Harold Daub, executive director of the Pennsylvania Federation of Sportsmen and Conservations, told commissioners at their board meeting on July 15 that the leaders of his 70,000 member group are among them.

“As an organization representing all anglers in the commonwealth, we believe the inclusion of entire angling public make common sense whenever it does not negatively affect our resource,” Daub said.

The majority of people who commented agree.

When the idea of placing section 3 under artificial lures only regulations first went out in early spring, it “flew under the radar,” Kuhn said. Only two people commented, both in favor of the idea.

When it went out again in late spring, 212 people commented. Of those, 125 supported allowing bait, compared to 48 who didn’t.

Those latter folks included Len Lichvar, a former commissioner and now co-chairman of the Pennsylvania Council of Trout Unlimited’s trout management committee. He said more restrictive regulations are sometimes appropriate. The commission itself has reports saying so.

Namely, they are to be instituted when a high quality wild trout fishery faces high angler use and high fish exploitation.

But allowing bait comes with a cost, he said.

Namely, fish caught on bait are more likely to die, either right away or over time, Kuhn said. That’s especially true in waters like Spruce Creek.

Larger trout tend to swallow baits deeper, he said. And big brown trout in particular do so.

“Smaller brook trout may not be as big of a concern. However, when you have larger fish, rainbow trout, brown trout, they’re more likely to get hooked deeper and suffer more adverse impacts,” Kuhn said.

Researchers then released those fish into a hatchery and monitored them for a period of time.

Fish caught on bait proved no more likely to die than those caught on flies or lures, he said. So rules prohibiting bait on Spruce Creek really make little sense, he said.

He pointed to several other wild brown trout waters around Pennsylvania, such as Spring Creek in Centre County, as proof. The commission manages them under catch and release all tackle rules, he said. And all continue to support high quality fisheries.

“So how can it be that we’re worried about hooking mortality from bait, yet we have streams that produce wonderful fisheries? Carline asked.

He called Carline’s work with the Bald Eagle Sportsmen “excellent,” so far as it went. But it does not account for fish being hooked time and time again, he said.

So anglers may handle each fish 24 times in that timeframe.

The result is few live longer than age 5, or get larger than 15 inches, he said.

Allowing bait on Spruce Creek’s section 3, with its inordinate number of wild trout, and would likely see higher angler use. That would harm the fishery, he said.

And the commission’s chief responsibility, Kuhn said, is to protect unique fisheries, even if that means limiting angling to some degree.

“We have to protect the resource first,” he added.

Commissioner Rocco Ali of Armstrong County didn’t disagree with that. But he said all tackle regulations can do that. And they can do it in a way that’s inclusive.

“We sell approximately 800,000 fishing licenses a year. We’re always trying to do better,” he said.

“My question is, what would it hurt to open this to all tackle catch and release? If it shows a detriment, then you change it. But to go and deprive the commoner, the bait fisherman, if you will, that opportunity, I don’t know that that’s wise.”

Commissioner Don Anderson of Somerset County was the other board member to vote against the artificial lures only regulation.

But the opposition carried the day. The new rule will go into effect likely later this year.