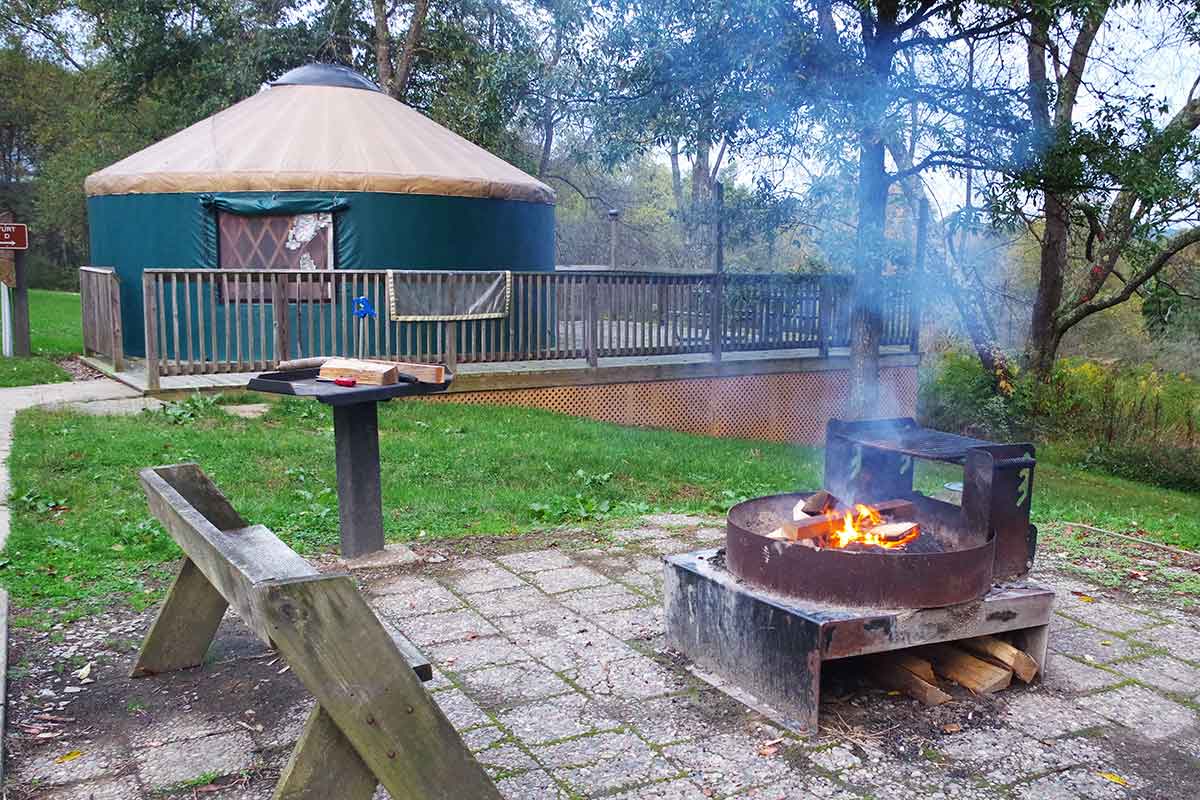 Maybe it was the refrigerator.

I mean, yeah. It was nearly 90 degrees outside. The air was uncomfortably thick and sticky –reminiscent of a locker room shower — courtesy of an early morning shower. And the fishing was slower than hoped.

The whole scene stood in striking contrast to the sight and smell of early October leaves already on the ground or drifting down before us.

Still, who could complain?

Mid-afternoon found us relaxing on a soft loveseat. Overhead a giant ceiling fan moved and chilled the otherwise dead air, all while we sipped ice water.

Genghis Khan never had that in his yurt I’ll bet.

Granted, such amenities likely wouldn’t have stopped him from terrorizing Eurasia back in the day. He enjoyed mayhem and was good at spreading it.

But who knows. I mean, it’s hard to be cranky in the midst of comfort.

We were finding that out.

Long-time campers, we’ve stayed in a lot of places in a lot of ways, from sleeping on the ground beneath a tarp lean-to to tents to cabins and more. Never, though, had we tried a yurt before. 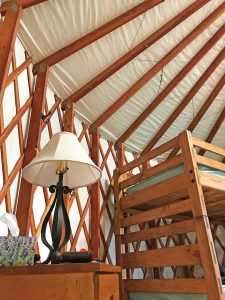 They’re ancient technology, if you will.

The nomadic Native Americans living on the Great Plains developed teepees, or tipis, made of buffalo hides for shelter. They could be set up and taken down in short order, so that tribes could follow the great bison herds.

Well, yurts are the central Asian version of those.

Used most famously the Mongolians, they’re equally portable and often covered in skins or felt. The difference is that they’re round, with a lattice work frame and a domed top.

Shepherds and others use them today, just as their ancestors did for centuries. They’ve been around, according to some records, since about 600 BC.

More recently, they are a fun alternative in a lot of campgrounds.

Staying in a yurt is not glamping, necessarily.

Few of those available to rent have indoor plumbing, though that’s certainly possible. Pacific Yurts, the Oregon company that made the yurt we were camping in, offers some pretty luxurious models, with details for customers on
how to add running water if desired.

And indeed, some do. People occasionally choose yurts for year-round living.

Ours wasn’t quite that fancy.

Instead, in the park we visited, a pump outside the door, near the fire ring and picnic table, offered water. We had access to a central bath and shower house, too, complete with laundry and dishwashing facilities.

It was a short walk away. But we were hardly roughing it.

Electricity is one. That meant the aforementioned refrigerator and ceiling fan, along with a stove top, microwave and lamps. We had not only the loveseat, but a table and four chairs and bunks to sleep five, as well.

Ours yurt also had heat – not that we needed it – and a wood floor, with two screened windows. The exterior was heavy canvas.

The whole thing was surrounded on three sides by a deck, complete with a porch list on one corner post.

There are no separate interior rooms or doors inside a yurt. This is communal living.

Yet, that’s not to say there’s no privacy either.

Ours had one interior wall. Providing backing for the refrigerator stood broke, it didn’t go all the way to the ceiling.

But imagine a clock face, with both hands extending from the center to the 12 position. Our wall was like that, breaking the room into a divided U shape.

Staying in a yurt was different and dun.

We didn’t have to fight off any would-be conquering invaders, thankfully. Nor did we see any bison or sheep herds, though a couple of white-tailed deer showed up to eat the apples dropping from a tree nearby.

Instead, we just enjoyed time exploring the woods and paddling on the water, knowing we could retreat to a few creature comfort sat day’s end.

So you want to try yurt camping? Here are some things to consider.