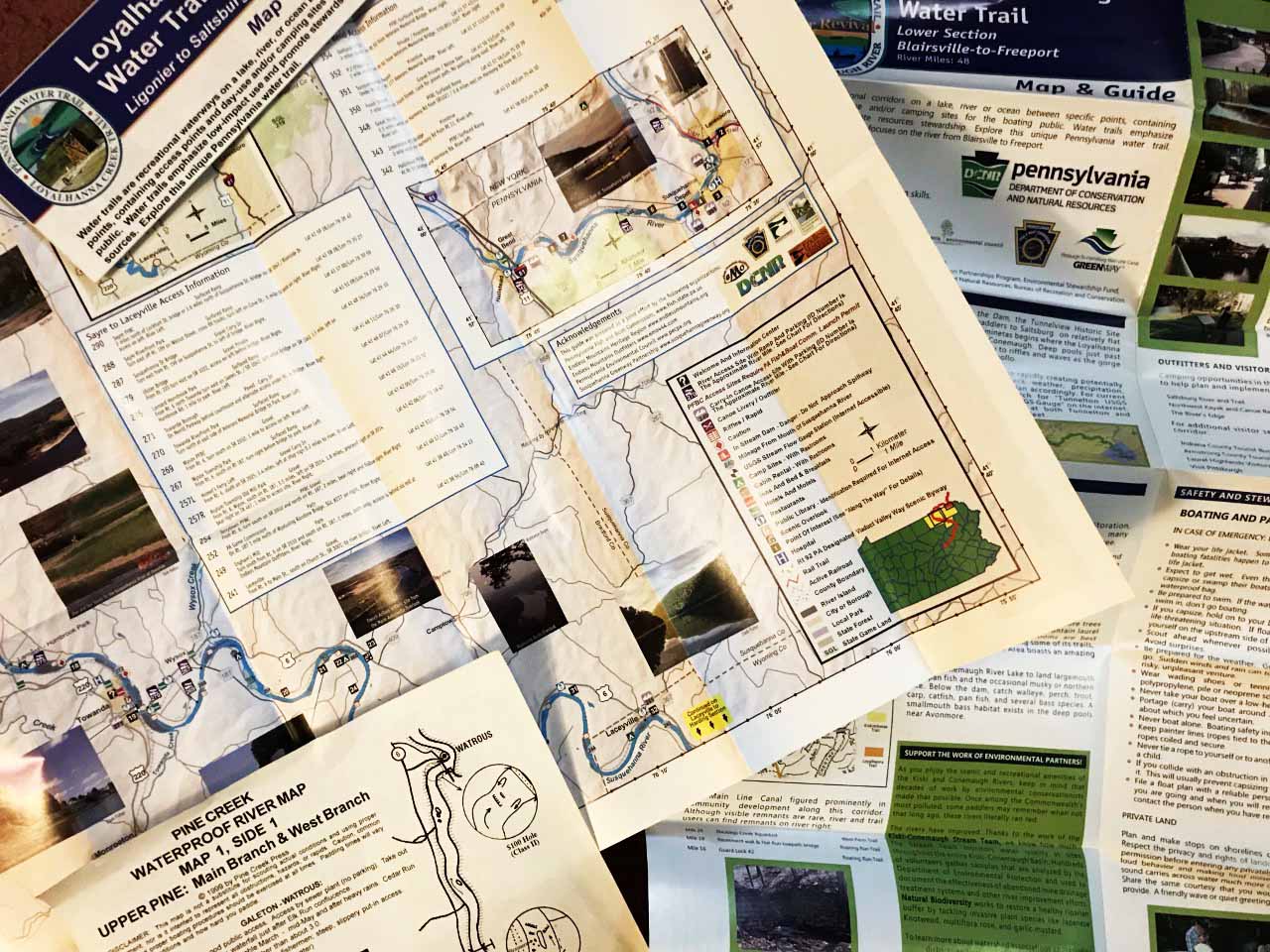 And of course it was getting dark.

So yes, this had the potential to be more interesting than hoped.

Several years ago I wrote a book highlighting some of the better places to paddle in Pennsylvania. This trip, a roughly 10-mile stretch of the Conestoga River in the southcentral part of the state, made the cut.

It was and is a pastoral float, mostly slow and easy, with just enough riffles to keep things interesting. White-tailed deer and cows kept me company in equal measure along the way, with some Canada geese and smallmouth bass mixed in. There were cornfields and woods, the remnants of several old stone foundations, cool breezes and warm sun.

But this was a little more than four hours from home.

Since I was by myself, I arranged to have an outfitter meet me at the take-out point. We left my truck there and he drove me and my canoe upriver to start.

I floated back at my own pace and ended the trip on my own schedule.

My take-out was a primitive launch in a township park. Ah, but that park.

It was literally the one lot in a suburban development too oddly shaped and inaccessible to put a house on. Three steps led from the parking lot – with space for all of four vehicles – between two homes to a couple of swing sets.

And that was it.

There was no way to tell where the next door yards ended and the park began, no signs for the boat launch and no trail to anything. Worst of all, the river was on the far side of a tree line, hidden from view.

I should have walked down there before we left, to see what the launch looked like from the riverside. But in the rush to get underway I didn’t.

And hours later, close to what had to be the end of my trip, I hadn’t found it.

The outfitter earlier gave me what he said were GPS coordinates for the takeout, scribbled on a scrap of paper. And I had my own GPS. But his numbers weren’t matching mine.

So spending an unprepared night on the riverbank or ditching the canoe to find a road seemed in the offing.

Fortunately, I had a river map.

This was a fairly crude one. But still, it identified enough landmarks that I figured I had to be close to the park.

It wasn’t the first beachy-seeming landing I tried. Winding through some trees led me only to barbed wire and more cows.

But my second guess turned out correctly.

Two trips to the truck later – one carrying gear, the other my canoe – and I ratcheted things down in full-on darkness and headed home.

That map was the key, which is why now, more than ever, I always make sure to have a water trail map with me on the water.

Water trails have grown tremendously in popularity in the past two decades – you can find them all over the country nowadays. And like hiking trails, most are mapped pretty well.

Some maps are free, some aren’t. Many come in printed form, others as PDF files you download to your phone. Some are even interactive web versions.

All contain a wealth of information, usually far more than just the river’s path. They detail things like:

Some rivers maintain consistent flows and can be floated year-round. Others don’t. Water trail maps tell you which are which and how much water you need.

Pennsylvania’s Clarion River, for example, is a treasure, with nearly 52 miles officially classified as a National Wild and Scenic River.

But, as its map explains, the river must read at least 2.5 feet at the U.S. Geological Survey gauge in Ridgway for it to be floatable. Less water than that and you’re not paddling, but taking your boat for a walk. More than 6 feet and you’re in a flood.

Knowing how much water you need, you can go to the USGS water data site — https://waterdata.usgs.gov/nwis — plug in the gauge you want and get almost real-time data on water levels.

Most maps tell you where you can get on and off the river.

What’s more, they often spell out whether a launch is a paved one, capable of accommodating motor boats, or if it’s a more primitive carry launch. Additionally, they often say whether the launches are public or private and what permits are needed to use them.

Most water trail maps spell out the length of the trail, usually in one- or two-mile increments. That’s handy to know.

In most cases, on easy rivers, you can figure on covering two miles an hour, give or take, depending on whether you stop to fish, swim or eat lunch.

Being able to tell the distance between launches lets you plan out how far you can expect to go in a day.

Rivers are classified on a scale. On one end, class I rivers are the easiest, suitable for beginners, with more riffles than rapids. On the other, class VI rivers are as unpredictable and dangerous as they come.

River trail maps identify the location and strength of rapids, something that allows you to pick a trip suiting your skills.

Some river hazards change from season to season and even week to week. A strainer that never existed before can pop up after a flood event, for example.

Others, like low head dams, are more permanent. And they’re always deadly.

River maps tell you where those are and how to avoid them.

Canoe and kayak camping is tremendous fun. And paddlers have access to places – think river islands – few can get to.

River trail maps highlight camping opportunities, from the most primitive to the most modern.

Rivers were America’s first superhighways, the routes by which a developing nation moved people and products from place to place.

And you can often see the remnants of that bygone era from the water. River trails take you past historic buildings and ancient carvings done by native peoples, not to mention things like picnic areas, interesting small towns and more.

Sometimes you can plan and carry out a trip all on your own. But sometimes you need someone to shuttle you around, provide canoe or kayaks, or something else. Outfitters exist to do those things and river trail maps tell you who they are, where they’re located and how to reach them.

Add all that up and a river trail map is obviously something worth having. They contain loads of information for the asking.

And these days, I ask.

Check this out, too: A canoe camping checklist for every paddler