Vernal pools a source of unique, varied life in spring 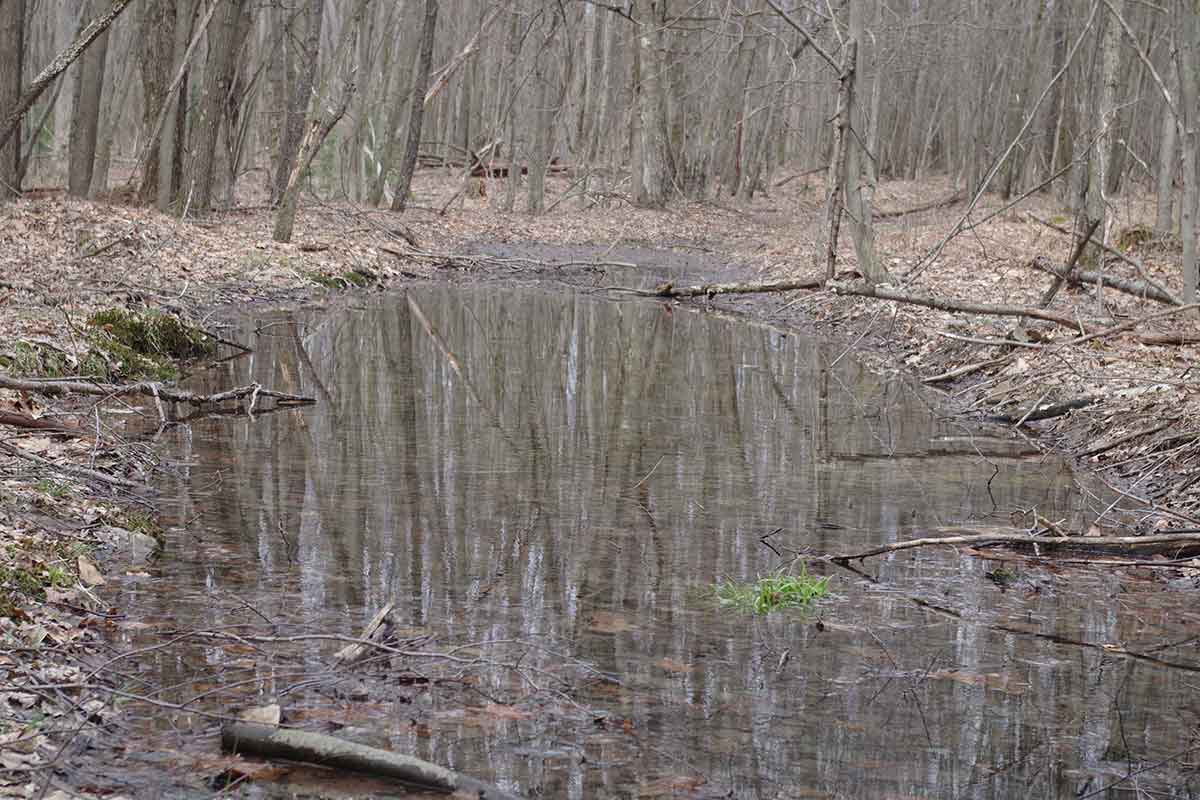 Vernal pools may not look like much at first glance. But they harbor all kinds of wildlife.
Bob Frye/Everybody Adventures

It was further proof that life often bursts forth in the unlikeliest of places.

I was at a close-to-home shooting range, tacking up targets. Someone else’s was lying on the ground behind the backstop. It was discolored and degraded from soaking up water in what appeared to be a puddle.

Retrieving it for the trash, I noticed the “puddle” was actually a squarish pool, maybe five yards across. It was just more than ankle deep, judging by the water pouring into my sneaker when I got too close to the edge. Grass protruded through the surface.

But it quickly sprang to life.

When I knelt down to pick up the garbage, a dozen or so green frog tadpoles wiggled away. They scurried from beneath one pile of rotting leaves to another.

Intrigued now, I took a closer look. They were everywhere, those tadpoles, playing hide and seek every time they felt a tremor in the water.

Gently parting the blades of some clumpy grass even revealed an adult red-spotted newt. 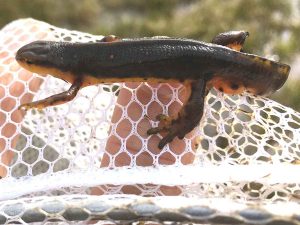 None of that was a surprise necessarily. Nature loves an opportunity, after all.

And that’s just what vernal pools are.

They exist in woodlands from the Northeast to the far West and at many points in between. They’re largely the same everywhere, in composition and role.

“Basically, vernal pools are small, seasonal forest ponds that typically dry out at some point during the year. They are usually full in the early spring as snow and ice melt, and dry completely (or at least mostly) by late summer or early fall,” says the Massachusetts-based Vernal Pool Association.

Vernal pools can pop up anywhere there’s a depression, so long as the underlying geology and climate are right.

According to the U.S. Environmental Protection Agency, they are most common in Mediterranean climates on the West Coast and in glaciated areas of the Northeast and Midwest. Sometimes they’re mere puddles. At other times they cover an acre or two. They can be isolated or connected to one another.

None, though, have any permanent connection to a river or stream.

For being so temporary – at least in terms of being wet – they are critical to many “obligate” species. The Pennsylvania Natural Heritage Program defines those as animals only able to breed successfully in pools that can’t sustain fish populations.

“Fish prey heavily on eggs and larvae, and without seasonal pools some species would not be able to compete and reproduce,” the program says. “Although there are obvious challenges for an animal using an aquatic environment that disappears for part of the year, the benefit is a habitat free from predation by fish.”

But they’ve got to act fast. 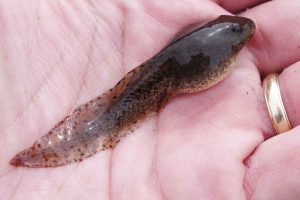 Some species, like fairy shrimp, lay eggs that can survive a pool drying up in summer or freezing in winter. Most amphibians, though, must hatch, grow into their terrestrial versions and leave before the water does. Delay too long and they won’t make it.

Hundreds of migratory and resident bird species use vernal pools each year, along with similar numbers of insect species.

It’s not just animals, though. Unique and rare plants also coexist with vernal pools, like Shumard’s oaks and raven’s foot sedge, among other.

Indeed, vernal pools are part of a complex food web.

Leaves and vegetation – some from plants dependent on the pools – fall and become food for invertebrates. They are in turn eaten by salamander larvae, turtles and wading birds.

Many of the amphibians that crawl out of the pools as adults, meanwhile, spend 90 percent of their life in the surrounding forest. There they are prey for shrews, raccoons, and owls.

“Through this complex food web,” says New York’s Department of Environmental Conservation, “the energy that was originally stored in fallen leaves at the bottom of the pool cycles through many animals and ultimately returns to the forest system, maintaining important connections between aquatic and terrestrial landscape elements.”

Because they’re both temporary and “often smaller than the bulldozer that threatens to destroy them,” as the EPA says, they’ve been alternately dredged, filled in, built on and more nationwide. Pest control, declines in water quality, climate change, and habitat fragmentation also threaten pools.

“In parts of North America, vernal pools have declined at an alarming rate. This loss includes a wide span — from California to Missouri to New England,” says the Michigan Natural Resources Inventory.

They’re getting more love and attention these days, at least. A number of state agencies and non-government organizations are inventorying vernal pools. The idea is to document and protect those that remain. 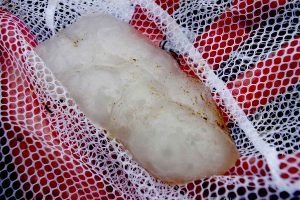 They’re fascinating to explore, a seasonal, life-giving feature of the woods worth a look.

One foot already wet from the pool behind the target stand, I changed into the muck boots in my truck before walking to another in the nearby forest. It was longer but narrower and, as it turned out, deeper.

Stepping into it for a closer look at a spotted salamander egg mass, lying on the bottom and looking like chunks of ice, my foot sank into the decay. Water began slipping in over my boot.

But with that I retreated to the truck and let nature take its course until next spring, when vernal pools will pop up and start producing life all over again.

If you want to explore vernal pools, many state conservation agencies offer those kinds of programs. In Pennsylvania, for example, the Department of Conservation and Natural Resources has a list at https://events.dcnr.pa.gov/search/events?search=vernal+pools.

The Ohio Vernal Pool Network just concluded its annual Vernal Poolooza, but often hosts other events throughout the year, too.

Meanwhile, if you know the location of vernal pools, there are ways to protect them, as well. State wildlife agencies and non-government conservation organizations are mapping locations using “citizen scientists.”

In New York, for example, you can register the location of pools here. In Pennsylvania, do it by clicking here, while in Massachusetts, it’s here.

And if you live in another state, contact your state wildlife or conservation agency for details on their vernal pool programs.