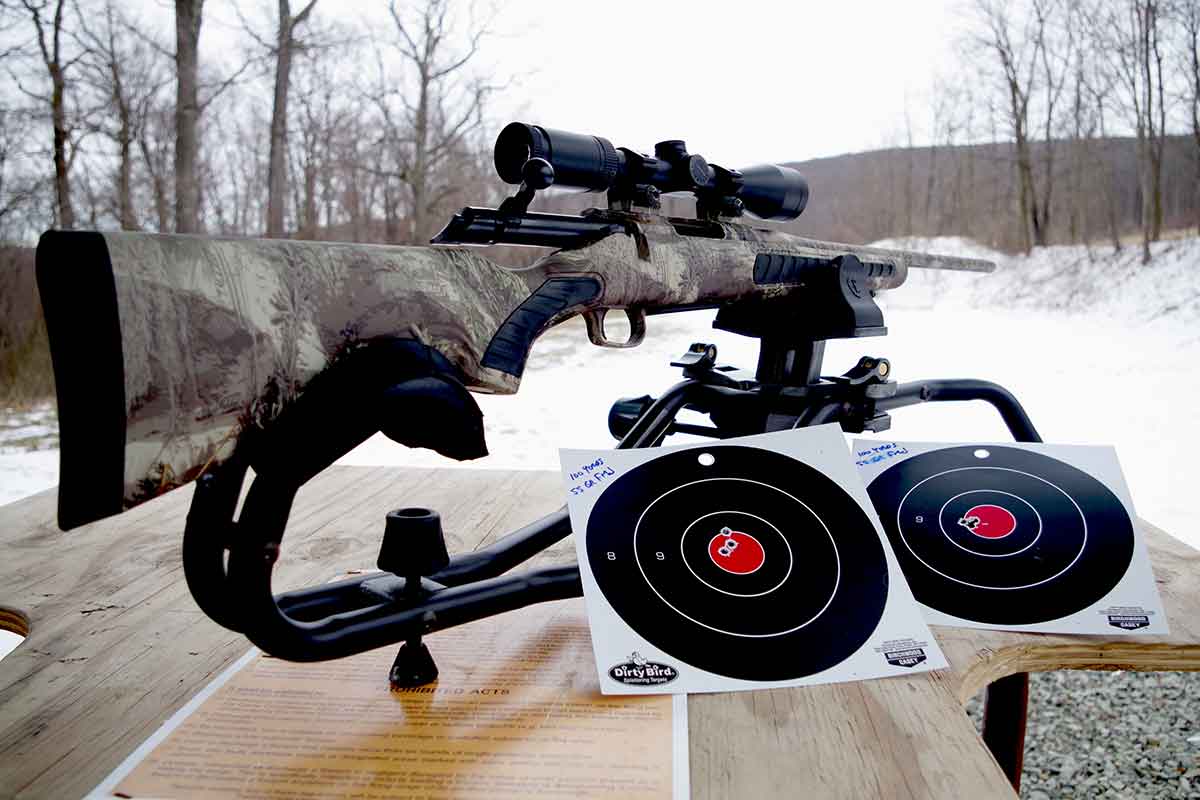 Shoot it? Heck, for a while it wasn’t certain I could load it.

The folks at Thompson/Center sent me one of their Venture Predator rifles in .223 Remington to test and review. The gun has been around for a while now, and I’d been a fan from afar, having seen them when they first came out at a large gun show.

Never having shot one, though, I was excited when it arrived.

Right out of the box the Venture Predator is a handsome firearm. My test gun was finished in Realtree Advantage HD Max-1. The stock, the trigger guard, the fluted barrel – everything but the black Hogue grips on the pistol grip and forend and a black rubber butter pad — are camouflaged that way. 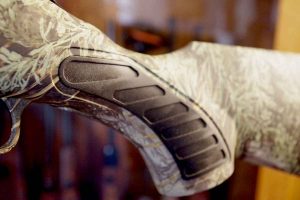 The Venture Predator in Realtree Advantage Max-1 is totally camouflaged except for Hogue grips on the pistol grip and forend and a black buttplate.
Bob Frye/Everybody Adventures

If the green camo doesn’t do it for you, though, there’s a Realtree AP HD snow camo version available as well (I’ve seen those, and they’re really nice, too).

With both patterns, it’s possible to get a matching scope and scope rings, so that your rifle is dressed the same top to bottom.

My rifle didn’t have those accessories. So for testing, I topped it with a relatively inexpensive 3×9 Weaver scope lying around home. My cash-strapped son previously bought it on clearance at one of the bog box stores for his deer rifle. It stayed there just one season.

It’s an OK scope, relatively clear and bright. He killed a deer with it the one autumn he took it into the woods.

But the dial to change magnification is ridiculously hard to turn, especially when it’s cold and you’re wearing gloves. So he swapped the Weaver out for a different scope and I use it for testing.

In this case, I put it on the Venture Predator and bore sighted the rifle.

Finally, before heading to the range, I removed – or tried to remove – the rifle’s detachable magazine.

The rifle comes with one. It holds three rounds, with room for another in the chamber.

According to the owner’s manual, you’re supposed to push the latch just in front of the magazine and catch it “as it falls out.”

That didn’t happen. In fact, to get the magazine out the first few times, I had to press the latch, grip the front of the magazine, and push down on the top of it through the bolt opening. It was that tight.

It was sticky from being new, I think. Only after doing that 10 times or so did it loosen up enough that I was about to pull it out with one hand.

Even then, there was a bit of a trick to it.

Releasing the latch and then just pulling on the front of the magazine caused it to bind, stuck in the rifle at about a 45 degree angle. On this rifle, you had to release the latch, grab the magazine at about its center point, then pull it out.

That was easy enough from then on.

That issue resolved, it was time to go to the range. I was eager to see what this rifle could do.

As stated, the Venture Predator is a good looking gun. And at just 6.75 pounds before adding a scope, it’s a light one, too, perfect for carrying on predator or varmint hunts where you walk a lot.

It has an adjustable trigger, capable of being set from 3.5 to 5 pounds. It comes from the factory art 4.5; I left it there, as it seemed comfortable. The thumb safety sits right next to the bolt and is easy to reach.

So everything seemed set.

But, as with any rifle, the real value lies in how it shoots. This is billed as a real winner in that regard. Thompson/Center promises “minute of angle” accuracy with these rifles, meaning they should be able to group three shots within an inch at 100 yards.

And yes, it delivered. Oh mercy, did it.

I started shooting at 50 yards to make sure the bore sighting indeed had it on the paper. It was. A little more tweaking dialed it in pretty good.

Next, I moved to shooting at 100 yards. After a half dozen shots or so, it seemed on. 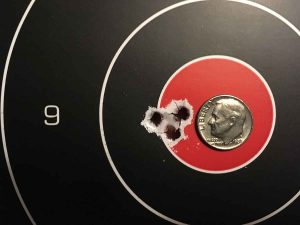 OK, I thought, time to put up new targets, fire some three-shot groups “for real” and keep score.

Talk about a rifle that will boost a guy’s confidence. I shot five three-shot groups. The tightest measured about 0.675 inches across – small enough that you could cover all three holes with a dime. Even the largest groups were just shy of 1.0 inches.

It’s hard to expect much more than that from an off-the-shelf rifle topped with a budget scope.

The Venture Predator is relatively inexpensive, too. It’s not an entry level gun necessarily; the manufacturer’s suggested retail price is $638. But many shops sell them for less than $600.

I didn’t buy this one. With one son just out of college and another still in, with all of the financial commitments that entails, I told myself before pulling the trigger even once that I would send this one back when finished with it, no exceptions.

Worst consequence of self discipline I’ve ever suffered.

Almost any rifle you buy these days has a chance to be decent or better. Some, though, prove exceptional. This was one, so it’s on the futures list. At some point its relative will be in the gun cabinet, count on that.

It was that good. 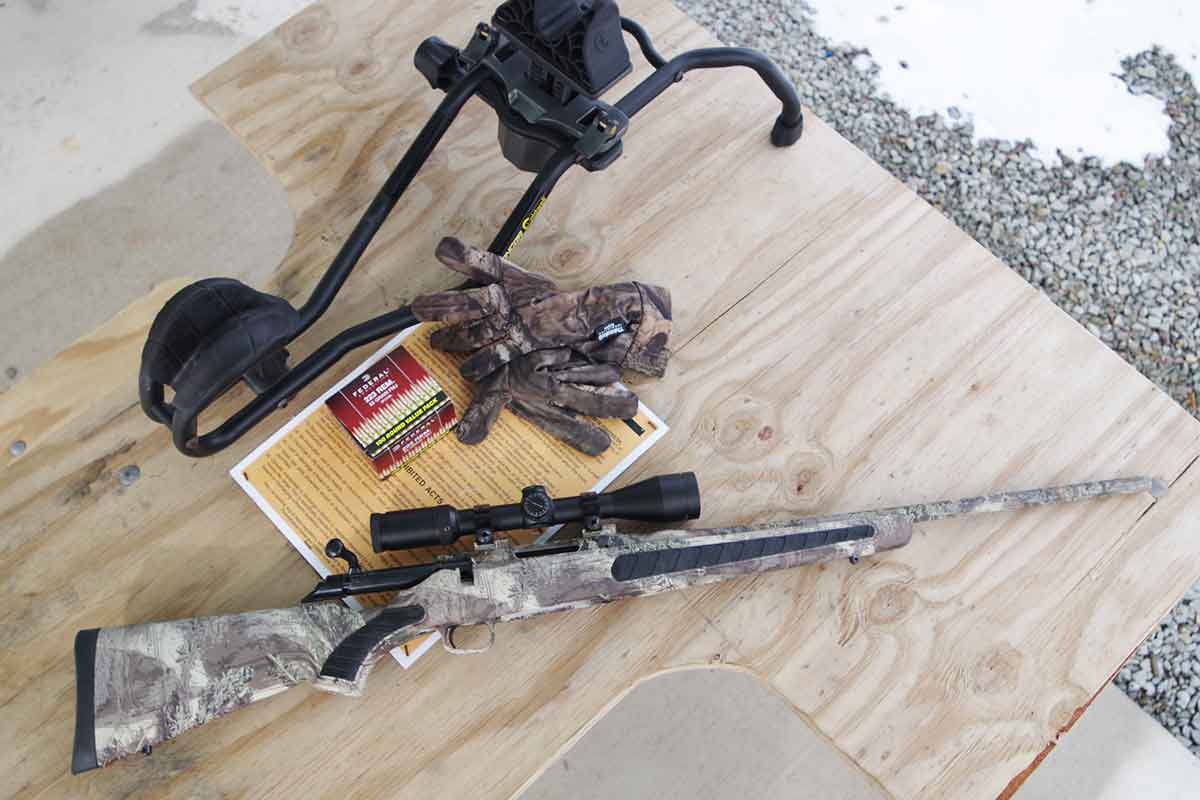 The Venture Predator is light enough to carry while hunting.
Bob Frye/Everybody Adventures