“Two Shot” Luke with recovery help from Roczie the beagle 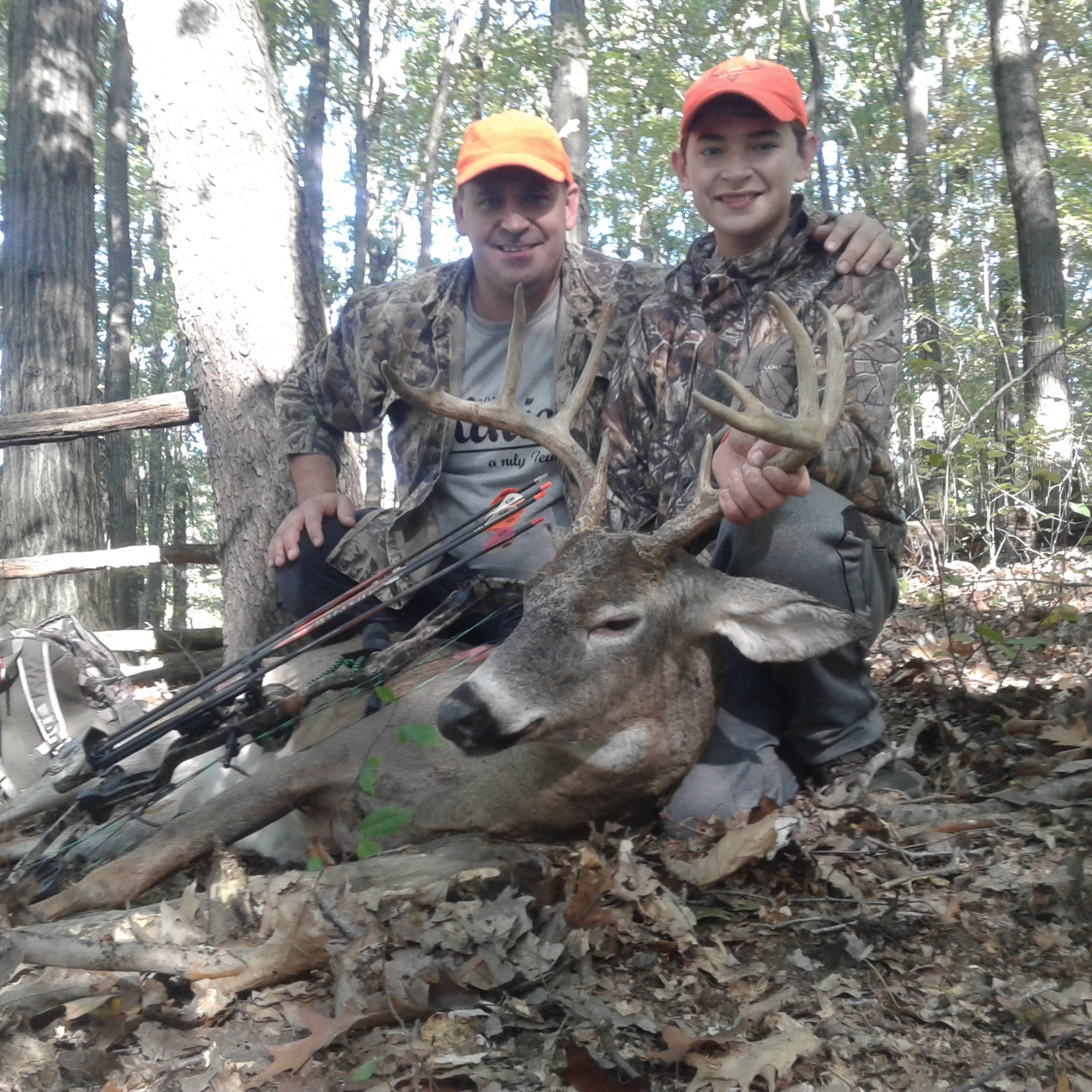 Junior SCB “Two Shot” Luke Gazdik, 13, fought back a few tears and some buck fever shakes to deliver a redemption shot at this wide 10-point buck. This buck sports a 17 4/8″ inside spread and 7 inch G2s. This is Luke’s second archery buck in two years. He shoots a Martin Melee at 41 pounds and was using Montec G5 heads.

Luke and I were hunting Oct. 17 in northern Allegheny County WMU2B in a set we had hung over the weekend. At around 6:30, he looked at me and gave me an “I see something” signal. Slowly he stood and his knees and feet began to bounce and shake, then he reached up and grabbed his bow. After a few minutes he sat back down as the buck was feeding behind the doe in a hard quartering to position.

Within a couple minutes, I see Luke fixing his bow toward the buck and drawing back. I got the next 30 seconds on video which shows the buck turned broadside and Luke’s shot hitting below the buck and the buck running off for about 40 yards.

He sits down and is very distraught. He believed he had missed completely and figured the day’s hunt to be ruined. But I see the doe standing there at 25 yards unfazed by the recent commotion. Then, I notice the buck out at 60 yards standing in the high grass. I assured him that the buck was at ease and as long she stayed, he would stay by her too. I had him reload and told him to make the next chance count.

It took 15 minutes but the doe finally began to walk past our stand. At that time, other does and fawns were streaming into the immediate area. The buck returned, made up the distance and walked closely behind the doe. Luke prepared for a second shot. Light was fading and winds were picking up but remained favorable for our position. Luke took aim and sent a second shot toward his quarry. The shot was way back into the paunch, and he and the doe bolted out of sight. Immediately I said “gut shot”. He sat again and put his head in his hands.

As it became dark, I pondered our next move. I consulted with some friends and fellow SCB admins and received some wise advice. “When in doubt, back out!!!” – CJ.

We climbed down and went to retrieve the arrows. Upon finding the first arrow, we discovered it to be covered in fresh blood from one end to the other. I said “You hit him first shot!?!” And we reviewed the video a couple times but couldn’t determine where he was struck. We tracked the trail out into the field where he was standing and discovered a considerable amount of blood in the grass. Later, we found out this shot had passed under the body and grazed the opposite side front leg.

Soon we moved to the second shot location and tracked him to there and to the second arrow which had passed through and fallen only about 20 yards away. Upon inspection, we verified that there was food/fecal matter along its length. Both arrows were put back into the quiver.

Knowing that the buck was a mature trophy and that the shot was not well placed helped us to decide to contact Susan Edwards to bring in her blood-tracking beagles.

Susan was very professional. She was very specific in her questions and instructions. She directed me not to take up the deer’s trail so as to not disrupt the evidence for her dogs. Her questions included, what type of device was used, how far was the shot(s), how high were we, mechanical or fixed blade, where was it presumably hit, how far did we follow the trail and some others.

She clearly communicated her schedule to me and arrived on time. We met her and the dogs and completed some paperwork and quickly got to work.

Her beagle Roczie was fitted with her leash and showed great confidence and acumen for that task at hand. The tracking started at the shot site and quickly Roczie had us walking past the pink flagging that I had tied at the arrow site. That gave me great confidence that she would lead us to the buck. Roczie cut through the 6 foot high grass like a hot knife through butter. I have a portion of her tracking job on video and it gives you an idea of just how mangled and dense the area was that the buck had traveled. Amid the tall grass and after almost 400 yards of tracking, Roczie led us right through a bed which the buck had used overnight. We would have never found this spot without her help. At that point, Susan expressed concern that we should have found the buck there expired. “Something caused that deer to get up and leave that resting place,”she said. Luke and I became anxious, worried and a little doubtful that we would happen upon the buck at that point.

However, our fears were quickly erased as Roczie quickly moved perpendicularly to the general trail now heading south, entered the woods and led us to the expired buck less than 50 yards from that bed. Luke and I embraced, and Roczie was very happy to have found “her trophy.” 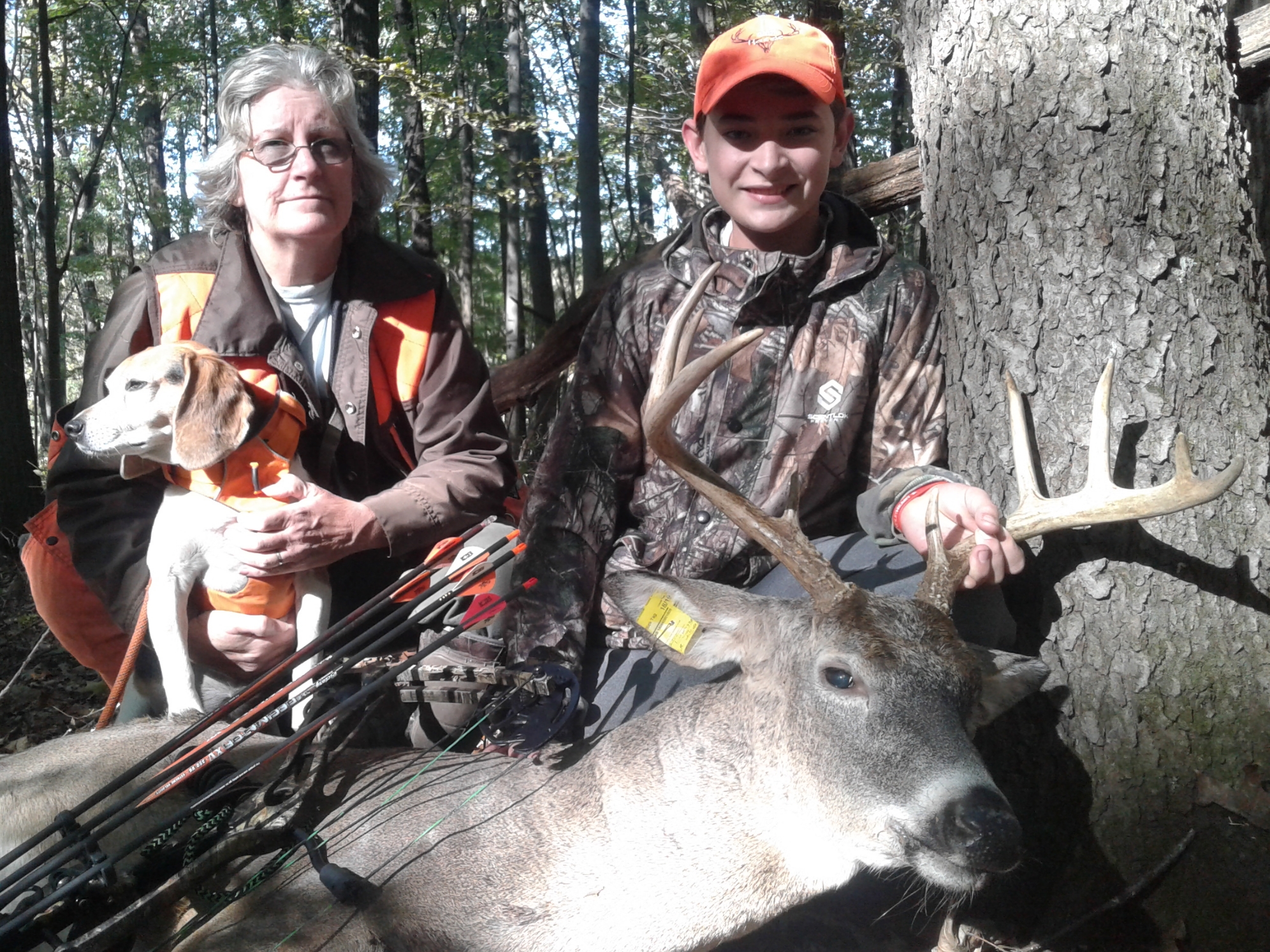 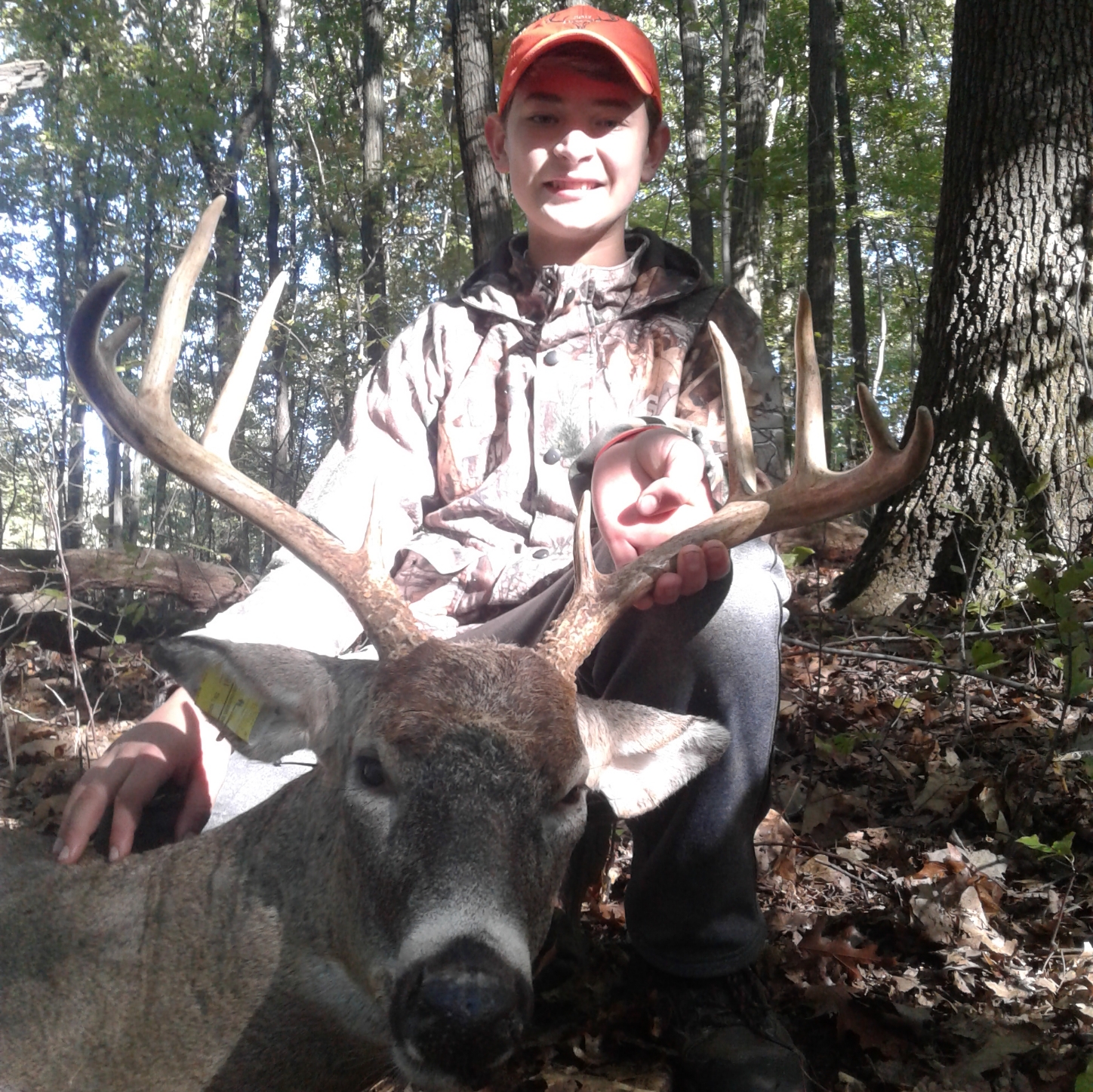 Pennsylvania legalized dog tracking for wounded deer this year. In my mind, it can be a game changer for those needing help in their recovery efforts. Susan is only one of a few who are working this western Pa. area. She stated that she would be willing to help train others who desire to enter this venture.

I would like to again thank Susan and her two dogs, Roczie and Ruby, for their expertise. Also, I’ll give a huge congrats to “Two Shot” Luke for harvesting a fine Pa. trophy.