Anglers will see more big and bright trout in 2020 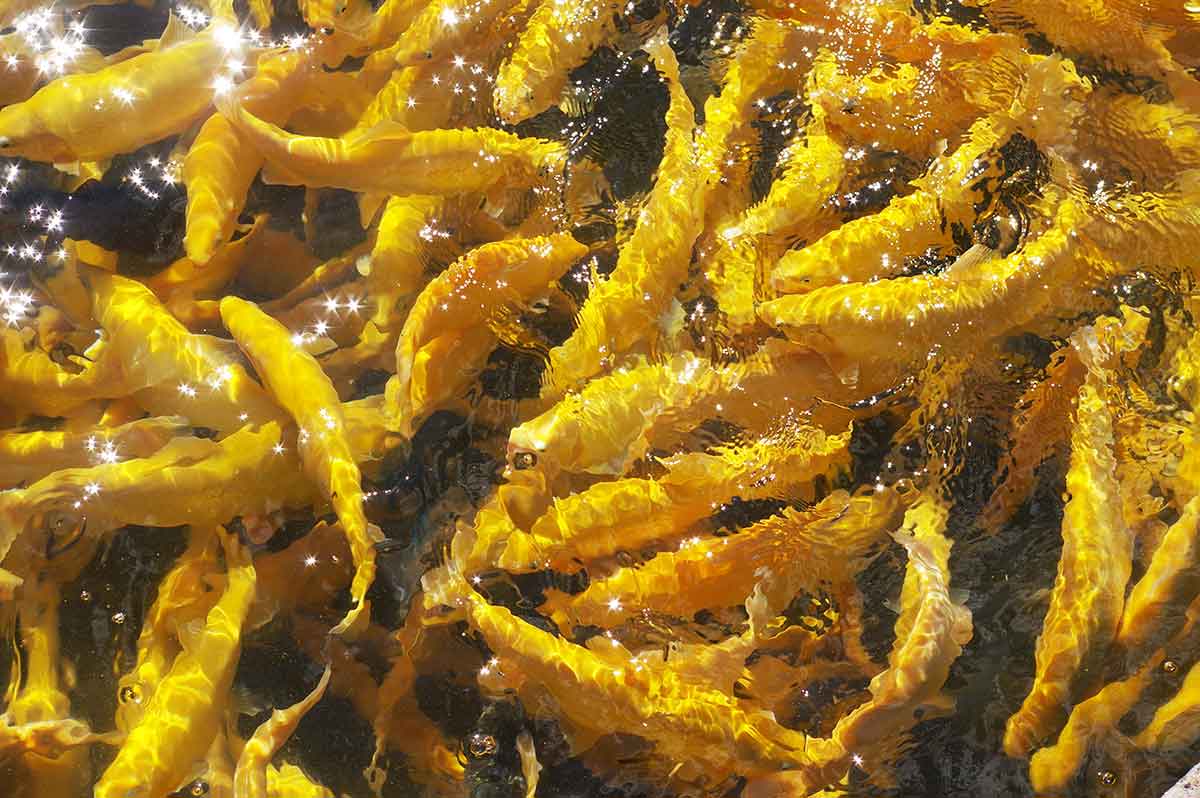 Pennsylvania will stock more trophy trout, including golden rainbows, in 2020 than ever before.
Bob Frye/Everybody Adventures

This is going to spawn a lot of lusty dreams between now and April.

Of the angling kind, anyhow.

Each year, the Pennsylvania Fish and Boat Commission stocks “trophy” trout in streams and lakes across the state. That includes brood fish, or brooks, browns and rainbows held in a hatchery for several years for egg collection, and golden rainbows.

All stretch 14 to 20 inches when finally released.

Those numbers are going up significantly in 2020. Dave Nihart, coldwater unit leader for the commission, said the commission will stock 60,000 brood fish and 13,000 golden rainbows starting in March.

“So any given angler who goes out on the stream, theoretically, has twice as many chances to take home the fish of a lifetime as they did before,” added Andy Shiels, the commission’s deputy director for field operations.

“I know that fisheries staff and hatchery staff are pretty excited about the product we’re going to be able to deliver starting next spring for the anglers of the commonwealth,” Nihart said.

And that anticipation extends beyond just the fish themselves. There’s the matter of where they’re headed and when, too

For starters, that means more big fish in most waters.

This past spring, for example, most stream sections and lakes received between five and 10 brood fish. Next year, close to half will get at least 40, Nihart said.

“We want to put as many of those out there as possible for the anglers to enjoy when we know they’re going to be there,” Nihart said.

As for goldens, the commission will put the bright orange fish in an additional 61 stream sections or lakes next year.

More notably, though, it will hold 2,400 of those to stock after opening day. That’s something new. In years past, the commission released all of its golden rainbows before the opener.

But the commission now wants to give anglers who specifically target the ever-popular golden rainbows a reason to keep fishing further into the season, Shiels said.

The commission is also telling anglers where it’s putting those fish.

Each year around Feb. 1, via its app and the stocking scheduled on its webpage, the commission identifies the stream sections and lakes getting stocked and where and when anglers can meet the stocking truck. It tells anglers, too, what kind of trout – brooks, browns or rainbows – it’s releasing.

But it didn’t really get that word out in a big way, Nihart said. It will better publicize that information in 2020.

There’s something else worth noting, he added. The commission is putting the majority of its brood trout and goldens into waters managed under statewide regulations.

Special regulations waters, like those in the Keystone Select program, are getting big fish, too.

But the commission will release the “vast majority” of trophy trout in waters “open to whatever type of tackle people want to fish with,” Nihart said.

Shiels said the hope is all of the changes will spark interest in and enthusiasm for fishing.

“We see this as a positive for 2020, and a way to continue to build some excitement, at least in our stocked trout program,” he said.

Big trout in the future

This big fish bonanza the Fish and Boat Commission is promising for next spring? It’s not intended to be a one-year wonder.

“What happens in 2021 with the fish production? Are we going to run out of broods at some point?” he asked at the commission’s recent quarterly meeting.

“Looking forward, we’re looking to sustain this for the foreseeable future,” he added.

Thanks for that goes to technology.

Environmental standards limit how much fish waste the commission can send downstream from its hatcheries. But, Nihart said, upgrades to effluent treatment systems are making it possible to hold more trout back longer.

So while the commission isn’t raising more fish, it is holding some in hatcheries longer, allowing them extra growing time. And it expects to be able to do that season after season, Nihart said.

The cost of doing that is minimal, he added. The commission will spend just $44,000, or $1.20 per fish, to raise additional trophy trout, Nihart said.

The average angler never hears about those internal improvements, said commissioner Richard Kauffman of Berks County. But, he added, they are proof of fisheries and hatchery staff doing good work.

“I think our anglers have a lot to be thankful for,” he said.