It requires time to build a fishery. That’s the take-home message.

In the past decade-plus, dozens of lakes around Pennsylvania were drained – “dewatered,” they call it – to allow for repairs to their dams.

That puts an end to existing fisheries, of course. But the Pennsylvania Fish and Boat Commission restocks those lakes with a variety of species to create new ones.

Analyses of several lakes in that category over the past year show that, while all are progressing to various degrees, it will take years for them to totally recover.

Drawn down in 2008, 47-acre Opossum Lake in Cumberland County offers potential if not peak angling just yet.

Anglers can catch – and keep – stocked trout from the lake. All other fishing is on a catch and release basis, so that the populations of warmwater and coolwater fish like largemouth bass, bluegills, crappies and muskies can re-establish themselves.

Those fisheries are improving. But they’ve got a ways to go yet.

Fish and Boat Commission biologists sampled the lake in 2015 and again in 2018. The total number of bass caught decreased from the first sample to the second, but the average size of the fish increased. Whereas once the majority of fish stretched 6 to 7 inches, most now go 10 to 11, biologists said.

“Further improvement of the quality of the fishery is anticipated…” said biologist John Frederick. 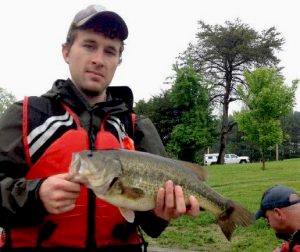 The lake’s bluegills, crappies and bullhead catfish are reproducing well enough that no further stockings are necessary, biologists said. But they likewise have some growing to do.

Eighty-two percent of white crappies, 71 percent of black crappies and 63 percent of bluegills are shorter than minimum quality sizes, says a commission report. The bullheads average less than 8 inches, but are super abundant, Frederick said.

Their average size should increase as natural factors trim their numbers a bit, he added.

Biologists found some muskies survived stocking, too, and believe they will add a “trophy angling component” to the lake in time.

A 91-acre lake in Washington County, Dutch Fork was drawn down in 2004 and didn’t get refilled until 2013. That ranks among the longest dry spells statewide.

It’s producing some good fishing now, though. At least for largemouth bass.

Biologists did nighttime electrofishing to sample the bass population this past spring. Their catch rate exceeded statewide guidelines for total bass and bass longer than 12 and 15 inches.

In fact, said biologist Mike Depew, there are “plenty” of fish longer than 15 inches and some as long as 20.

“Largemouth bass fishing should continue to be excellent and only improve as the population of bass increases in this impoundment,” he said.

There’s hope channel cats will take off, Depew said. But the bluegills fishery is still “poor,” and the crappie fishery just “fair.”

But whether it can sustain that is the question. Historically, gizzard shad outcompeted Dutch Fork’s panfish for food, keeping them from reaching their potential.

Biologists didn’t catch any shad in a survey of the creek upstream of the lake in 2016. None turned up in a 2018 trap net survey either.

But they’re back now. They showed up – albeit in low numbers — in a survey done this past spring.

The tiger’s are the tale at Leaser Lake.

A 117-acre impoundment in Lehigh County, it was drawn down in 2008. The Fish and Boat Commission refilled it in 2015 and stocked it with a host of species, including tiger and purebred muskies, chain pickerel, channel catfish, largemouth bass, walleyes, white crappies, yellow perch, brown bullsheads and bluegills.

The tiger muskies are doing best of all.

“Tiger muskellunge are abundant and angler catches are common, with lengths of fish reported having already reached 51 inches since 2013. Five tiger muskellunge captured during the survey ranged from 27-41 inches, suggesting survival from more than one stocking,” said commission biologist Mike Kauffmann.

Chain pickerel are thriving as well. The lake supports at least a “moderate” population, Kauffmann said, with fish in the 19- to 24-inch range most common.

Brown bullheads are abundant, too, with lots of fish in the 10- to 15-inch range. Kauffmann said they appear to be spawning successfully.

The news isn’t as good with some other species.

Biologists didn’t find any walleyes in their survey work, and only one channel catfish. Yellow perch are scarce.

And Leaser Lake’s bluegills are almost universally small but very abundant, something that might be hindering the largemouth bass.

Kauffmann said there are good numbers of bass longer than 15 inches. But the number of fish shorter than 12 inches is “well below” statewide objectives. He attributed that to low reproductive success – too many are getting eaten by bluegills – and so he requested an additional bass stocking this year.

Now this is how good things can get with time.

Gouldsboro Lake is a 250-acre state park lake in Monroe County. It was drawn down – though not completely — in 2007, but refilled the very next year.

Some fish remained in the remnant pool that existed during that time. Fish and Boat crews stocked additional fish later. 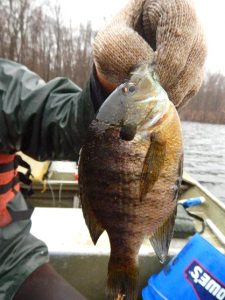 It released walleyes five times between 2008 and 2014. None of those stockings took root, however, and that effort is discontinued.

Gouldsboro’s panfish are another story.

The hope is that will all continue.

The lake also holds largemouth bass and chain pickerel, though few of the latter exceed 18 inches.