Options are limited. The 577-acre park has just three trails, none of them much more than a mile long. Two snowmobile paths add another 2.5 miles or so of possibilities.

But don’t be misled.

This is a wonderful place to explore by foot, thanks in large part to its geography.

Retreating glaciers cut through this part of the Finger Lakes region, about an hour south of Rochester, at the end of the last ice age. They carved deep, narrow gorges in making their escape.

The scars left by that slow and torturous flight are beautiful to behold.

They exist in the form of waterfalls. The park has three main ones – up to 45 feet tall – and at least six smaller ones. They carry Stony Brook over a streambed that is largely one solid sheet of bedrock. 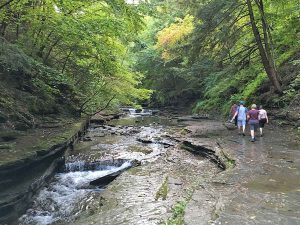 People have long come here to take it all in.

When the railroad reached this area in 1883 – some of the pillars that carried it across the gorge remain – it become popular with tourists looking to spend summer splashing around in its cool waters. A resort sprang up and operated through the 1920s.

When it fell on hard times the state bought the land, or 250 acres anyway. It added more later.

And in the 1930s, the men of the Civilian Conservation Corps built the bridges, buildings and trails that remain today.

Crowds of people again flock to Stony Brook, not only to hike, but to camp, picnic, fish, hunt, swim in its natural pool, and more.

Visitors are prohibited from wading in the stream, given the slippery nature of the rock. Discouraged, too, is climbing the steep side walls to protect against erosion.

But there’s plenty to see even by staying on the trails.

A favorite hike of many is to walk upstream along the Gorge Trail, then return to the trailhead and parking lot by coming back down the West Rim Trail. That covers about 1.5 miles, total.

Officials rate the hike as moderate because of the conditions.

The Gorge Trail involves some steps, but offers the best views of waterfalls. The West Rim Trail goes through a typical northern hardwood forest: expect to see plenty of oak trees and a forest floor carpeted, in season, with acorns.

Perhaps the most challenging part of this trip is the West Rim’s stairs. Trail makers installed them — concrete slabs stuck into the hillside — to make the descent a little easier.

They do help. Lots of people walk this path, and all of those footsteps could crate slick, muddy conditions in the wrong weather.

But they’re also narrow and, thanks to nature’s wear and tear, often unevenly spaced. So they’re not perfect.

Anything else would seem artificial, though.

Raw power, exhibited at a grinding, numbingly slow yet relentless pace over centuries, made Stony Brook what it is, after all.

So if the trail requires users to slow down a bit to take in its virtues, well, that only seems fair. 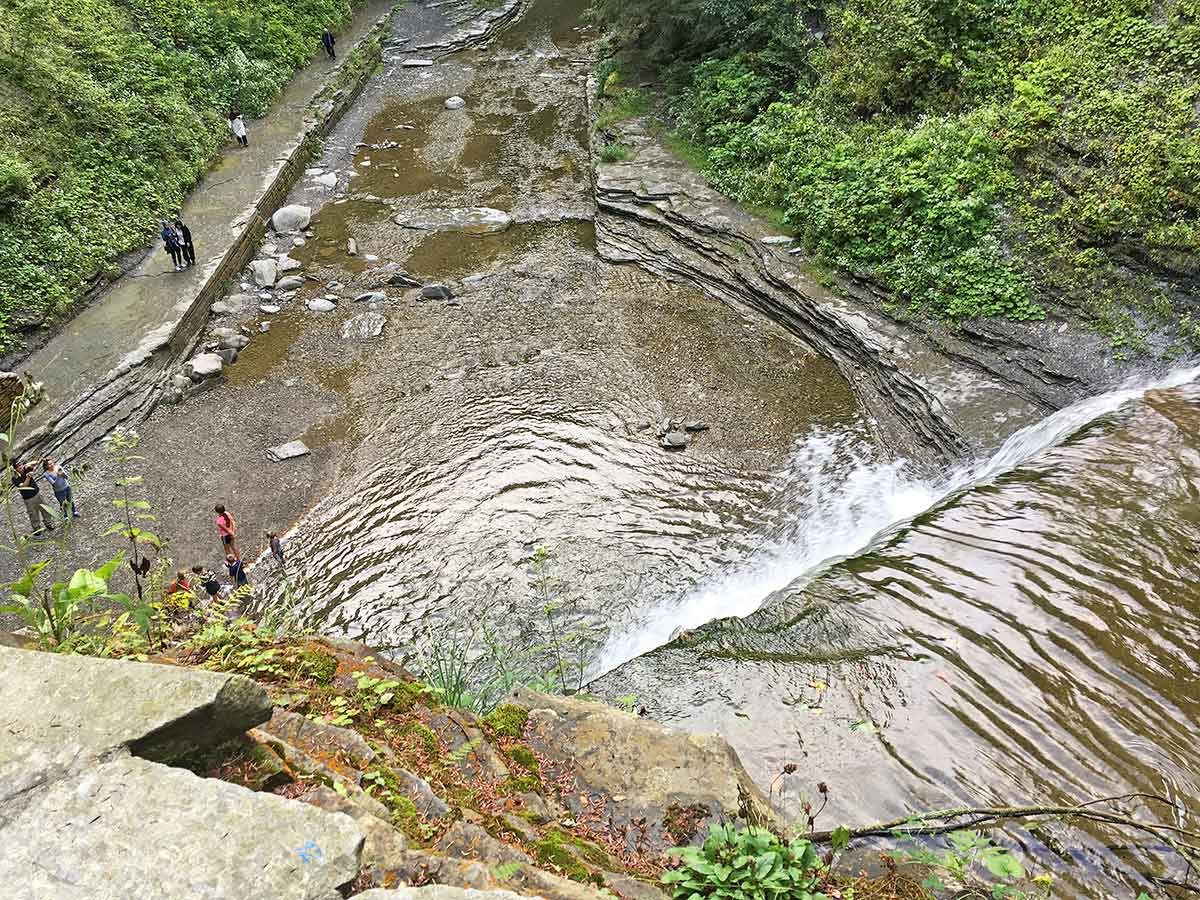 Camping: Stony Brook State Park has 88 campsites as well as eight cabins for rent. Reservations can be made here.

A campground map is available. There is also a group campsite.

Admission: Stony Brook is open dawn to dusk, year-round. Most New York state parks charge a vehicle use fee. Those vary by location and season. But generally speaking, fees are $7 per car. Buses, commercial and otherwise, pay more.

Worth trying: Stony Brook flows into a natural, 8-foot-deep stone swimming pool. It operates from Memorial Day through Labor Day, as does a 2-foot wading pool. Built in the 1930s, they’re unlike anything in most parks.

See also: Hiking through the sky, below it at Kinzua Bridge State Park