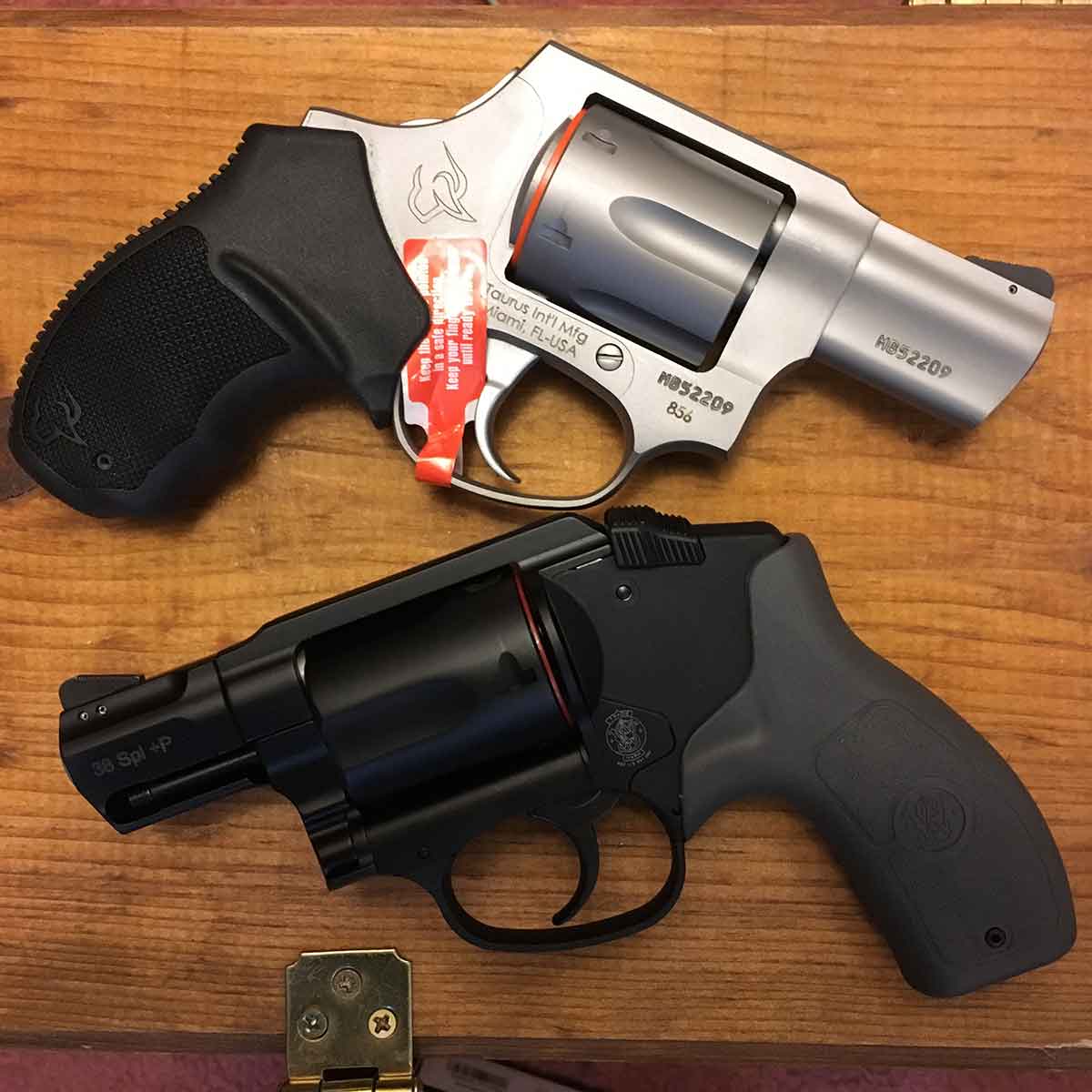 Perhaps they get paid by the bullet fired.

The heroes – and the villains, too, to be fair — in contemporary action movies all carry high capacity firearms as a matter of course. They lug around spare magazines like they’re nothing, as well.

And brother, do they pull the trigger.

If shootouts on the scale of those shown in movies occurred regularly in real life, every walk to the mailbox would be ankle deep in empty shell casings and spent lead.

It’s all a far cry from the old gumshoe movies of the past. Remember them?

They featured a gritty, hard-bitten private detective. He solved crimes, usually for some “dame” he was secretly sweet on. And his gun of choice was more often than not a revolver, and more especially a snub-nosed .38 special.

Well, those guns still exist, of course. And – even in today’s mega-magazine world – they have their place, for concealed carry or just shooting on the range.

More and more people are coming back around to them, too. And for good reason. They’re light if you want to carry one all day for personal defense, powerful enough to be serious, and relatively accurate.

We took a look at two recently, the Smith & Wesson M&P Bodyguard and the Taurus 856 CH, both of which can fire the zippier +P rounds.

Both are relatively new to the market and, just as importantly, priced right. While not ultimate budget guns, these don’t require a second mortgage to acquire either.

So, with the start of National Shooting Sports Month just days away, here are a few thoughts on each.

The first thing you notice about this revolver is just how light it is. Its 1.875-inch barrel is stainless steel, as is the five-shot cylinder. But the upper frame is aluminum alloy.

The result is a revolver that weighs just 14.2 ounces.

That’s nothing. You can carry this thing all day and never really notice it.

But I’ll admit to being a bit worried at first. 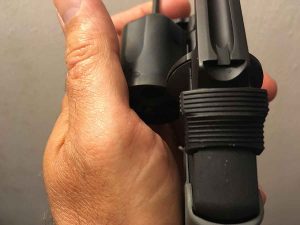 The cylinder release on the Bodyguard revolver is located on top of the grip.
Bob Frye/Everybody Adventures

The revolver’s gray polymer grip is thin, another factor in its light weight. But I wondered if it was perhaps too slim.

In the hand, you can really only get two fingers around it. Your pinky, or at least mine, mostly fell below the grip.

Those with smaller hands might not notice that. But I worried in my case it might hurt control and thus accuracy.

That didn’t prove to be a problem at all, though. At the range I put a variety of 158-grain rounds through it, at distances of 7 to 15 yards. Each session was at least 50 rounds long, to see if hand fatigue from felt recoil might be an issue.

In fact, I found this revolver to be fun to shoot, and more accurate than I expected.

Sure, it was a bit “snappy.” All pocket-sized revolvers in this caliber are.

And the trigger pull is about as heavy as you’d expect. I didn’t measure it, but double action revolvers have, by design, a long trigger pull. That’s to prevent any accidental fires.

This one is no different, though it wasn’t problematic.

As for the sights, they’re pretty basic. The Bodyguard has fixed rear sights and a black ramp front sight. It’s secured by pins in case you want to replace it with something brighter, which you may want for low light situations.

That means that, out of the box, it’s far from a competition pistol.

But for close range shooting – which this is designed for anyway – it was possible to consistently group shots at 2 inches or less.

One neat feature of this gun is its cylinder release. It’s located on the top of the frame – sort of like where you’d see a tang safety on a rifle – so that you can work it with either hand.

I’m a righty, so it was kind of cool to be able to push the release forward with a thumb and pop the cylinder open with one finger on the same hand.

Suggested retail price on the Bodyguard is $385, but online and in stores I’ve seen them for closer to $325. A version with an integral laser costs more.

Taurus’ version of a .38 revolver has been around a while, thought it’s been tweaked over time.

The Model 85 came first, followed by the 856, which saw the cylinder enlarged to hold six rounds. The most recent iteration of this gun is the 856 CH, which stands for concealed hammer.

That lacks of an external hammer allows for double action firing only, but makes the gun less likely to snag on a pocket or something else when it’s drawn.

While not at all bulky – it has a 2-inch barrel – it is heavier than the Bodyguard. The model I tested weighed in at 15.7 ounces, a function of its all stainless construction.

There are versions with carbon steel and aluminum frames, though. 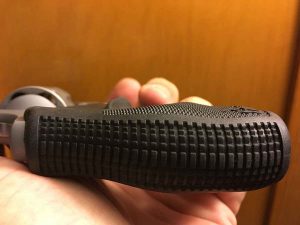 The grip on the Taurus 856 CH revolver is meant to absorb recoil.
Bob Frye/Everybody Adventures

The 856 CH has a more substantial grip, too. Contours on the front give your fingers a natural place to rest. It just felt solid, especially when drawing it from a holster, which I really liked.

I will say, though, this gun left marks on the palm of my hand after a while. The back of the rubber grip has channels in it meant to absorb recoil. They don’t hurt, certainly, But after putting 50 rounds through this revolver, there was a noticeable pattern of lines on my hand.

As for accuracy, the Taurus 856 CH is no slouch at close ranges. But it took me a bit of getting used to.
It features fixed front and rear sights, with the front one offering a serrated edge. Both are OK.

But the trigger pull on the Taurus 856 CH can seem crazy long. Shoot offhand and pull the trigger too slowly and you actually see the cylinder spinning. That could be distracting at times.

The result was that, for every four or five shots that grouped within 2 inches, there’d be one wayward flier.

Maybe that was just me. And maybe with more practice with the gun that would go away.

But, at least early on, it’s something I noticed.

That’s not to say this isn’t a nice gun and one I’d feel comfortable carrying. It is and I would.

And all the while it can be as cool to look at as to shoot. The version I shot was all stainless.

You can, however, get it with a variety of anodized colors, from blue and red to bronze and burnt orange.

Suggested retail price on this gun runs from around $360 to $400, depending on model, but you can usually find it closer to $250. It’s a real good option at that kind of price.

Revolvers by the numbers

Unique belt to carry your revolver, other guns

OK, so you’ve got a revolver to carry around with you. How are you going to do it?

Small handguns like the Taurus 856 CH and Smith & Wesson M&P Bodyguard fit in a pocket. And they do so without giving themselves away through your clothing.

But sometimes it’s just more comfortable to carry your gun on your hip.

For that, you need a reliable belt.

One option is the new offering from Nexbelt. The California-based company makes everyday carry belts that are meant to be both attractive and functional.

There’s one thing that really makes them unique, however. They have no holes.

The belt tightens and stays in place using a ratchet system.

I know what you’re thinking. That sounds almost, well, industrial. And truth be told, the belt clicks when you tighten it, as the metal tooth on the clasp runs over the plastic ridges on the belt’s underside.

But the no-holes design ultimately it lets you adjust your belt more precisely than probably ever before.

Instead of holes one inch apart, the ratchet lets you tweak the fit in increments of one quarter inch.

And these belts are made for those who carry a gun at least sometimes.

They’re not obviously tool belts, though, and not too obviously tactical. The company makes leather and fabric versions, both just shy of 1.5 inches wide. I wore a leather one for a few weeks.

It’s sturdy, certainly, but looks like any casual to slightly dressy belt does. It’s something you could wear, and carry a handgun, while still melting into the crowd, looks-wise, so to speak.

And that’s the goal most of the time, isn’t it?

When you get yours, you cut it to fit. The company advises adding 4 inches to your pants size.

To be safe, though – like my old shop teacher advised – it pays to be conservative when cutting. You can always trim more off later, but you can’t add it back on.

As for the buckle, two stainless steel socket screws hold it in place, an upgrade over the original pins.

It has a knob shaped sort of like a mini peanut on the bottom edge. You lift up on that to raise the clasp’s tooth, then slide the belt out of the buckle. It took a minute or two to get the feel of that. But once you do it a time or two, it’s quick and easy.

So all in all, this is a nice belt. It’s comfortable, does the job it’s meant to do and does it well, all while looking food. .

And that’s pretty good, right? If people said the same about me, well, that would be alright.