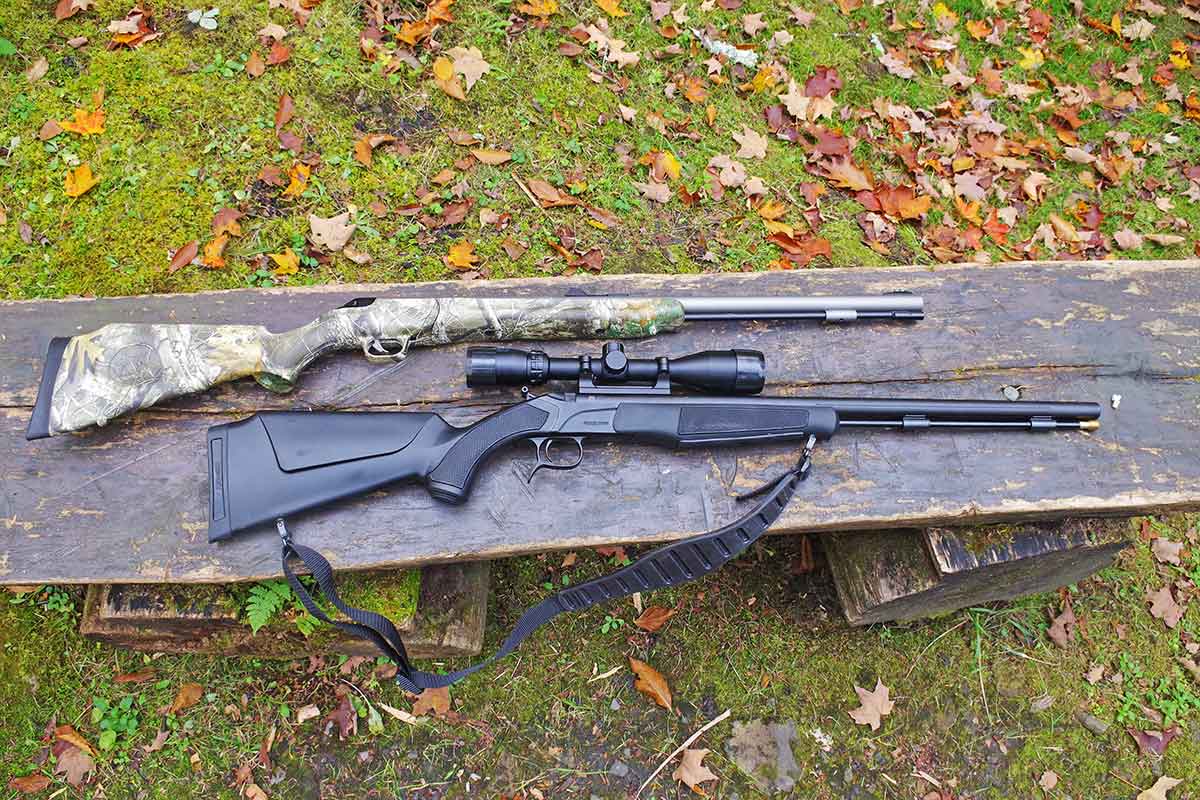 The timing was right if the results weren’t.

Going into this past fall, Pennsylvania adopted its first-ever muzzleloader season for black bears. It overlapped with an antlerless deer season in mid-October, a wonderful time to be in the woods because of the weather, the color and the peace, relative to the statewide firearms season.

Each of the two years prior, I stood ready for a whitetail when bears wandered past me no more than 50 yards away, unaware and unconcerned. And, of course, I had to let them walk.

But no one knows better than a hunter that hope springs eternal. So this past fall, I made arrangements to test two inline muzzleloaders, CVA’s Accura Mountain Rifle and Thompson/Center’s Impact!SB. The former is a higher-end offering, the latter an affordable starter gun.

Best case scenario, I’d have another opportunity at one of the state’s many big bruins while armed with one or the other.

Alas, that didn’t come to pass. I took a nice white-tailed doe with the CVA. But no bears cooperated.

Still, I found both rifles to be a pleasure to shoot, and far better than what was on the market even as recently as 2002, when inlines were first legalized in the Keystone State.

Here are some impressions of each.

I tested the all-black version complete with a one-piece scope mount and “Quake Claw” sling. For shooting, I topped it with a Bushnell scope.

Even before getting to the range, though, a couple of things jumped out about this rifle. 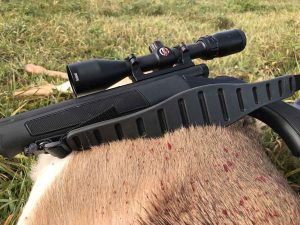 One is its grips. They’re checkered rubber on the butt and forestock. They provide comfortable control, as I learned when one day’s hunting turned into slogging aorund in a day-long downpour .

The ambidextrous cheek piece is a nice touch, too.

Then there’s the rifle’s hinge release. Like all break-action rifles, this one opens near the trigger guard.

But the Mountain Rifle release is built into the trigger guard itself. That’s not just convenient, but effective. It allows the weight of the barrel itself to open the action.

The “PalmSaver” ramrod is another nice little example of attention to detail.

The real test of any muzzleloader, though, is how well it shoots and how easy is it to clean afterward.

The barrel on the Mountain Rifle – which gives rise to its name — is a relatively short 25 inches. That’s by design, as it’s intended to be used in a tree stand or blind or carried through thicker woods as you travel from stand site to stand site.

In other words, just the conditions I routinely encounter close to home.

Two other things make the barrel really special, though.

First, the Mountain Rifle, unlike any other muzzleloader on the market, boasts a Bergera barrel. Those are made in Spain and often used on performance guns.

CVA believes in them enough that it promises to refund your money if you find something that outperforms it. And that might be tough to do.

At the range and in the woods, I loaded the .50 caliber test rifle with 300-grain Powerbelt bullets, 209 primers and 100 grains worth of White Hots pellets. I started at 50 yards to get the rifle on the paper, then moved back to 100 yards.

I fired three-shot groups, sometimes swabbing the barrel between shots and sometimes not, to simulate in-field conditions. Loading a sabot was pretty easy either way, thanks to the rifle’s “bullet guiding” muzzle.

In both cases, shots generally grouped at about 1.5 inches at 100 yards, and sometimes better.

The second thing noteworthy about the Mountain Rifle’s barrel relates to cleaning. Black powder is notoriously caustic. Fail to clean your rifle properly after a day at the range and – as I learned the hard way years ago — you can scar a barrel.

The CVA’s barrel, though, is treated with nitride. That’s not a paint or coating. Rather, it’s a chemical process that turns the 416 stainless steel black Most importantly, it brings the steel’s carbon to the surface, making the barrel impervious to rust inside and out. It’s so hard rust just can’t penetrate it.

I didn’t leave this one fouled for any length of time to test that. But I saw no evidence of rust or corrosion either.

You do still have to carefully clean the breech plug and other components. They aren’t nitride treated.

But the rifle comes apart with just one screw and the breech plug comes out easily enough by hand. All that makes cleanup fast and efficient.

Now, you pay a bit for all those features. The Mountain Rifle isn’t the most expensive inline on the market. But with a suggested retail price of about $494 (though you can actually usually find it for less) it’s a mid-range gun, pricewise.

Either way, there’s no denying the Mountain Rifle is a joy to shoot and carry through the woods.

Thompson/Center rifles in general have a reputation for quality. It’s well deserved, too, based on my experience.

And the Impact!SB is by all indications another popular offering in the lineup. 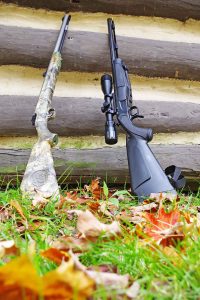 Inline muzzleloaders like these two are worth taking into the woods.
Bob Frye/Everybody Adventures

Price has something to do with that, certainly. While not the least expensive inline you can buy, I’ve seen them online and on-shelf for $260 to $360, give or take, based on the particular model. So it’s an affordable gun.

But is it just budget friendly or would it shoot well? I wondered that while waiting for it to arrive.

The short answer is that this is another gun worthy of the Thompson/Center name.

To see what it could do I shot the same primers and bullets in this rifle as in the Mountain Rifle, though I did switch to using Pyrodex powder.

The main difference, though, is that I tested this rifle using its open sights. Because of that – and more especially because of the limitations of my old eyes – I shot at 50 yards rather than 100.

After all, I thought, if someone is buying a more moderately priced rifle, maybe a scope’s not in the budget, at least to start. So I figured to see how the rifle might do in such a scenario.

The rifle’s open sights are good ones. They’re fiber optic – two red dots in the back, one green one in the front – and glow in the kind of early morning and late afternoon low light conditions when deer are most active. The rear sight adjusts with a screw for windage and elevation.
With them, the rifle shot well, probably better than I had a right to expect.

At 50 yards I was able to group three shots in about 1.5 inches. I’m sure adding a scope would allow a good shooter to do the same at 100. Certainly either way I’d feel comfortable taking it into the deer woods.

The rifle offers a lot of other nice features, too.

One is the adjustable stock. Remove the comfortably thick rubber recoil pad with two screws and then, by taking out to more, you can remove a 1-inch spacer. That adjusts the length of pull from 13 to 14 inches.

That’s a nifty option if you might share this gun among different people, with some of them on the smaller side.

The lever – or in this case “hood” — for this break-action rifle is well thought out, too. It covers the breech plug. Pull it back from either side – it’s got a knob on both the left and right – and the barrel swings open.

The breech plug itself goes in and out with just five turns. Keep it well lubed and you can even do it with just your fingers.

The Impact!SB comes in five finishes. The one I tested had a sharp-looking silver weather shield barrel and Realtree Edge composite stock. But you can get it in blued, black and in Mossy Oak Bottomland and Break Up Country variations.

All have a ramrod with a pivoting T-handle. Paired with the “quick load accurizer: muzzle design it made loading the rifle easy.

Finger grooves on the fore-end make it comfortable to hold securely while shooting.

End to end the rifle measures 40 inches long – the same as the Mountain Rifle – but with a 26-inch barrel. It’s well balanced rather front end heavy, as some muzzleloaders can be, and good for carrying in woodland settings.

Overall, the Impact!SB seems a lot of rifle for the money, which is all you can ask for.

As for me, maybe next year is the one when a bear falls to my muzzleloader. I’ll try again to make it happen anyway.

Check this out now: Henry Long Ranger outshoots the need for compromise