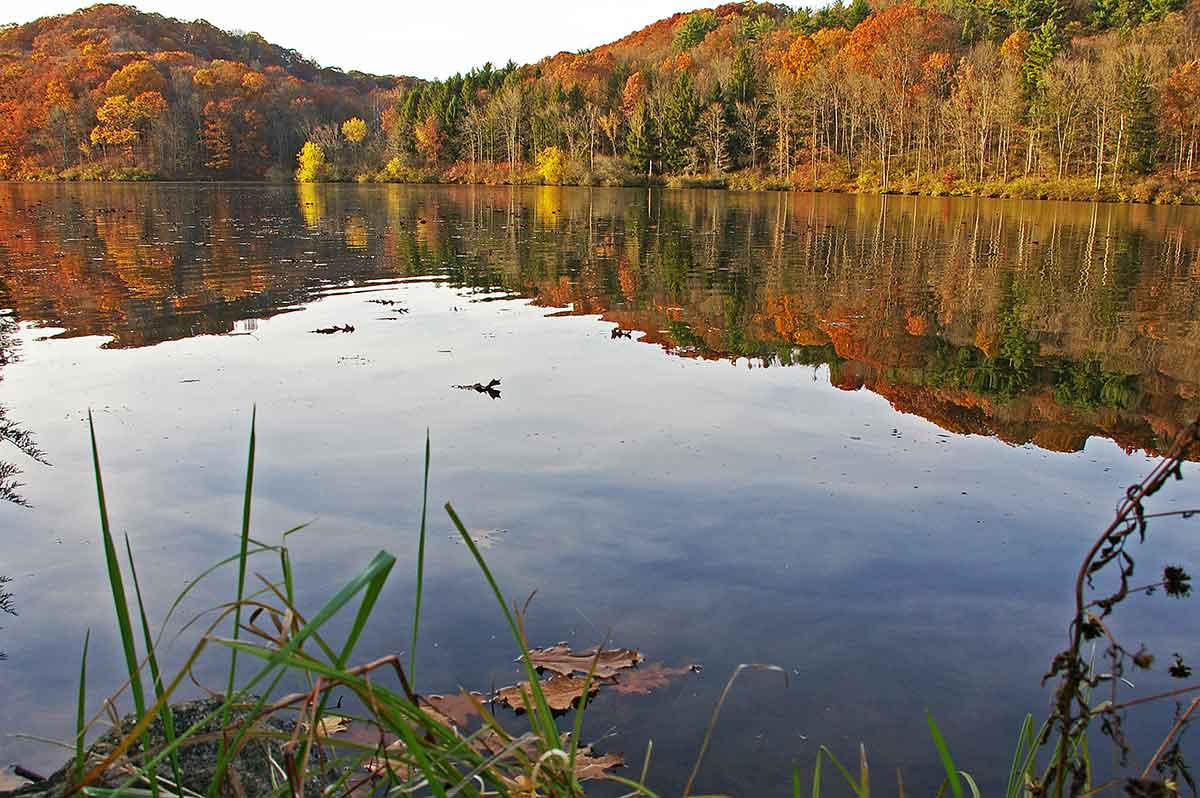 Raccoon Lake, seen here in all its fall color, is a good place to chase largemouth bass.
Bob Frye/Everybody Adventures

There’s a lot to be said for this kind of consistency.

Pennsylvania Fish and Boat Commission biologists surveyed Raccoon Lake, the 101-acre centerpiece of Raccoon Creek State Park in Beaver County, in 2008. They went back and repeated that work earlier this year.

The goal in each case was to assess fish populations.

What they found is Raccoon’s largemouth bass are doing just fine, thank you. The population was good in 2008, said Mike Depew, a biologist in the commission’s area 8 office in Somerset. It’s better now, at least for bigger fish.

Crews collected nearly as many largemouths total, and more largemouths exceeding 12 and 15 inches, this time than they did back then.

“There are a lot of nice largemouths out there,” he noted. “We got some sizeable fish. I remember seeing some five-plus pounders out there, and probably some bigger ones.”

“So it’s a nice quality bass population in that lake,” Depew said.

He attributed that to its forage base. This spring’s trap net survey revealed that Raccoon Lake is home to lots of shad and small panfish.

All of those bass are fairly well spread out, too, meaning they’re accessible to both shore and boat anglers.

In looking for bass, crews circled the entire lake, shocking along the shoreline as they went.

The one area that didn’t give up many fish was the extreme western end of the lake, near the beach. Depew said it’s shallower and somewhat silted in there.

But otherwise is was consistently – there’s that word again – productive.

“If you’re going up the right (northern) side of the lake from the dam, that whole shoreline was pretty good. And that one’s better to be fished by a boat,” Depew said.

“But you can find bass throughout the lake. Any place that has cover, particularly toward the dam where you have some deeper structure and deeper blowdowns, had fish.”

Seasonally, they populate the lake shallower coves, too, he added, spawning and chasing baitfish.

The other fish at Raccoon Lake

There are reasons to fish Raccoon Lake besides its largemouth bass.

Some are just better than others.

Stocked trout rank on the plus side. The Fish and Boat Commission stocks the lake with rainbow trout three times in spring, once before opening day and twice after. One of those plantings includes some golden rainbows, too.

It releases a smaller number of rainbows into the lake in fall, too. This year’s stocking occurred on Oct. 30.

The lake holds a few, said biologist Mike Depew, and a good proportion of those are nice. This year, crews handled one weighing more than 12 pounds.

But thanks to inconsistent stocking resulting from some hatchery issues, the population is sketchy overall, he said.

Then there are the lake’s panfish. They rank as a negative.

Not by number. There are a lot of them in the lake, Depew said.

But as is the case in many lakes with competing gizzard shad, Depew said few of the panfish are “anything to write home about.” Crews saw few bluegills longer than 7 inches or crappies longer than 9.