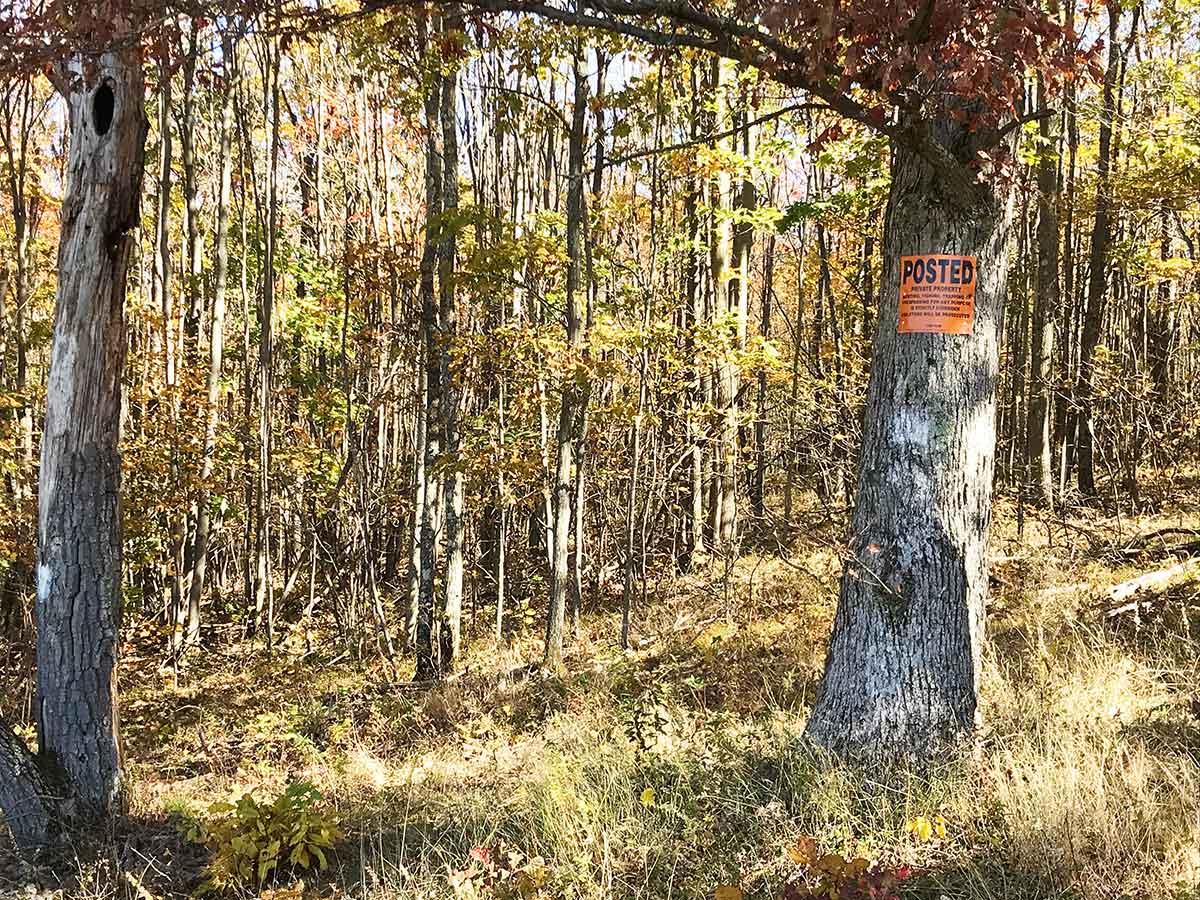 Posted signs like this are common. But a growing number of states are giving private landowners to choice to replace them with purple paint markings.
Bob Frye/Everybody Adventures

In fashion circles, they night explain this by saying that purple is the new yellow. Or orange. Or white.

Hunters, hikers, paddlers, adventurers of all sorts all across the country have long known to look for posted signs before venturing onto what might be private property. Those signs are familiar, colorful … and fragile.

Manufacturers produce most using paper or cardboard. As a result, most eventually crumble in the elements. Sooner or later, anyway.

And that’s to say nothing of vandalism. Vandals are prone to tearing down, stealing or otherwise destroying paper and cardboard signs – even the metal ones used in some states – as well.

So lawmakers around the country are giving landowners another option.

Namely, they’re adopting “purple paint” laws. Those allow landowners to “post” their property by painting purple stripes on trees or posts along the boundary.

Arkansas was the first to do that, in 1989. At least eleven others have followed suit, including Texas, Kansas, Arizona, Montana, Idaho, Florida, Maine, Indiana, North Carolina, Missouri and Illinois.

He also signed into law Senate Bill 147, which legalizes hunting on three Sundays across the state.

Republican Rep. Dawn Keefer of York County sponsored of the bill, saying the paint marks are more permanent and recognizable.

And, she added, purple pain laws are common enough now that manufacturers are adapting. Some, for example, have long made fluorescent paints for marking things like gas lines. Now, “no hunting purple paint” is available at retailers, too.

“Paint manufacturers have formulated cans of spray paint and brush-able paint specifically marketed as ‘no hunting paint to comply with these laws,” Keefer said.

Not just any purple stripe will do, though.

According to Pennsylvania’s soon-to-be law, purple stripes need to be 8 inches long and 1 inch wide. They would have to be three to five feet above ground and on trees no more than 100 feet apart.

Those are pretty common requirements nationwide.

But the meaning of purple pain varies state to state.

In Texas, for example, land posted with purple paint is closed to all trespassing, of any kind. In North Carolina, purple paint prohibits only hunting, fishing and trapping.

Pennsylvania’s purple paint law will prohibit trespassing on lands marked that way altogether. The only exception will be those entering to retrieve a wayward dog. They can get their dog, but then must leave immediately.

Check this out now: Hibernation an amazing winter survival strategy

And coming soon: A look at our annual holiday fishing gift guide.