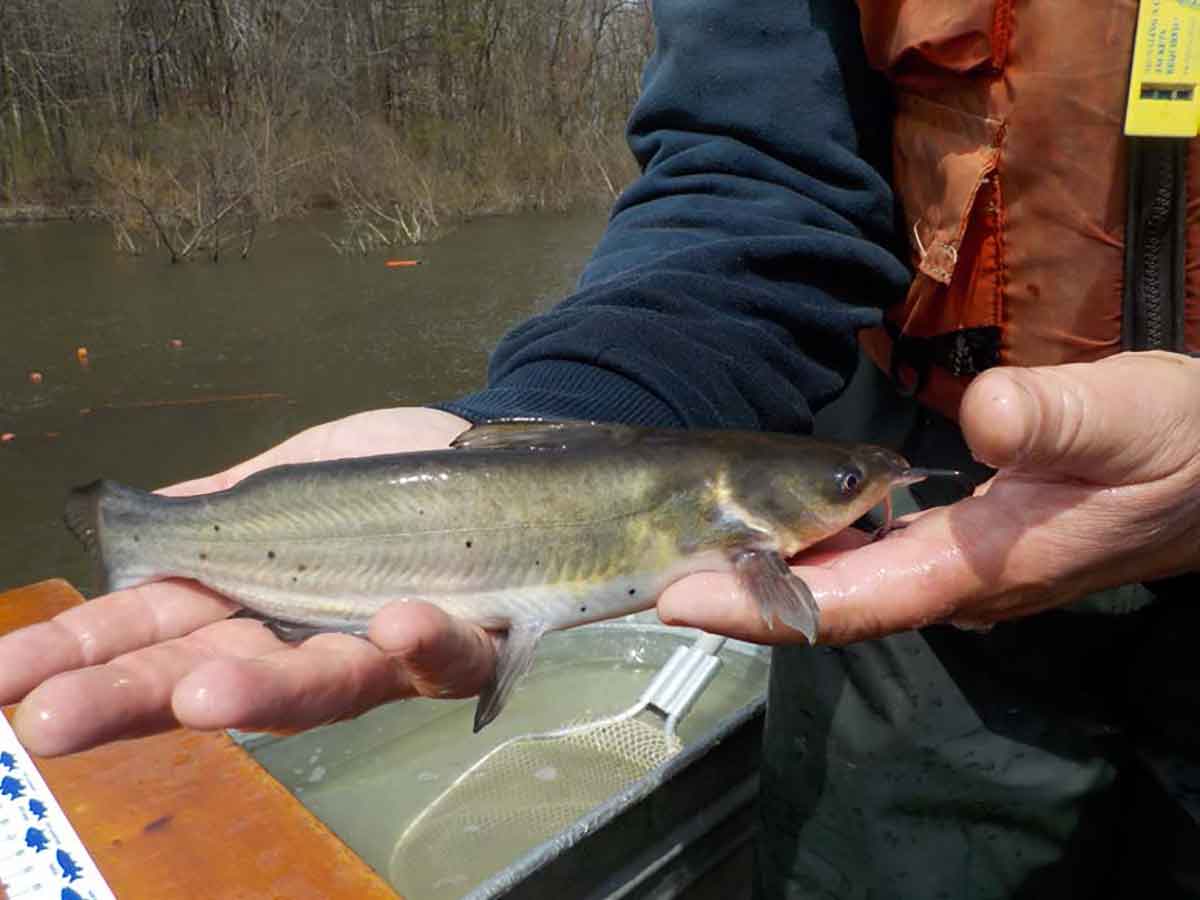 Channel cats like this one are doing well at Glade Run Lake.
Photo: PA Fish and Boat Commission

Once-in-a-lifetime fishing trips are called that for a reason.

They’re epic, awe-inspiring, spectacular even, for the fish, the scenery, the camaraderie, the adventure involved. But they are not in and of themselves the kind of things that create an angler.

Consistent access to waters close to home is important, too.

Pennsylvania Fish and Boat Commission biologists surveyed a few of those kind of “neighborhood” lakes recently, to get a look at the fish anglers might encounter on an evening after work or a weekend day trip.

Here’s what they found.

The story at Glade Run Lake is a mixed one.

The commission drained the 52-acre impoundment in Butler County in 2011 to repair its dam. It refilled it in 2017.

Since, it’s restocked the lake with a variety of warmwater species in an attempt to create new fisheries. Biologists surveyed the lake this spring to measure results.

One bright spot is the lake’s channel catfish. The commission stocked fingerlings in 2017 and yearlings in 2018. Students involved with the cooperative nursery at Butler Area Intermediate High School and Butler Middle School put fingerlings in the lake last year and this one, too.

This spring, trap nets caught fish from all four releases.

Another fish present in large numbers are white suckers.

That might not seem a big deal, biologists admitted. They handled 732, between 10 and 17 inches, but even at those sizes anglers typically don’t target them.

But all those fish offer hope, a commission report suggests.

“This is a positive development because they will make a substantial contribution to the forage base without the negative side effects of common carp, which would occupy the same niche in this small impoundment,” it reads. “We’ve made a concerted effort to keep common carp out of Glade Run Lake, and so far, we have been successful.”

Things may or may not be so promising with bass.

The bad is that the 28 fish were all 10 to 11 inches long, “which gives us no indication of natural reproduction,” biologists said.

So biologists will conduct an electrofishing survey this fall specifically to see if bass are reproducing in large enough quantities to support a fishery.

This is a small water big on opportunity, at least for two species.

Only four acres, Lower Burrell Park Pond – located in Westmoreland County and alternately known as Holtzhauer Lake – is a good place to target channel catfish and largemouth bass, according to surveys done over the past two springs.

Commission biologists examined it using trap and hoop nets for the catfish and electroshocking for the bass.

The intent with catfish was twofold. Biologists wanted to asses not only overall numbers, but figure out whether stocking catfish as yearlings averaging 8 to 10 inches in length was paying bigger dividends than stocking fingerlings averaging 2 to 3 inches.

Catfish stocked in recent years were fin clipped in a unique way. That allowed biologists, upon recapturing them, to determine whether they were stocked as yearlings or fingerlings.

Surveys show yearlings are surviving at a much higher rate than those stocked at smaller sizes.

Biologists caught 94 channel cats in their nets in 2018. They ranged from 6 to 26 inches, with all sizes in between represented pretty well.

Twenty-six of those exhibited fin clips. Of those, 23 were stocked as yearlings.

“Future stockings of channel catfish at Lower Burrell Park Pond will likely consist of only yearling fish, as their survival far exceeds that of fingerlings,” said commission biologist Mike Depew.

As for bass, the lake offers a pretty good fishery, all things considered. Depew said electroshocking turned up 23 fish between 8 and 18 inches. That was down a bit from previous surveys, but he attributed that to muddy water conditions.

While at Lower Burrell biologists also counted and measured its panfish. They are less than impressive.

They handled black crappies, white crappies and bluegills. All were abundant but “exhibited poor size structure.”

Biologists collected scales from each species. They will analyze them to determine how old the fish are.

If it turns out that the fish grow too slowly, perhaps because of overabundance or something else, Depew said the commission might institute some management changes to boost the fishery.

Located on state game land 111 in Somerset County, Cranberry Glade is known for one thing perhaps above all others.

It’s a relatively shallow lake that, by mid-summer, resembles nothing so much as a meadow in need of a good mowing.

Biologists examined the lake twice in the past 18 months: once in spring 2018 to look for panfish, and again this year to look for largemouth bass. The found a lot of the former, not so many of the latter.

Black crappies and bluegills are especially abundant in the lake. Crews caught more of those than anything else.

There are some nice ones, too.

He expects the bluegills fishing in particular to only get better.

But as for bass, biologists caught just 10 this spring. They ranged from 3 to 18 inches, though biologists handled a 20-incher when looking for panfish last year. The overall catch rate, on a fish per hour basis, was down compared to previous surveys in 2009 and 1997.

The reason? Wait for it … weeds.

The commission may look at ways to limit them somewhat, he said.

In the meantime, bass anglers can expect to sometimes catch another species. Biologists got 21 northern pike at Cranberry Glade. They ranged from 19 to 30 inches, though most were less than 24.

A 7-inch pumpkinseed, at left, and an 8-inch bluegill from Cranberry Glade Lake.