Take a quick look around the outdoors world with a tip, a new piece of gear and more.

It’s a simple thing that can make a big difference. If you’re hunting deer from the ground this season, standing at the base of a tree, take a moment when you first get there to clear the area around the trunk. Scrape away any leaves, limbs or other things that might go crunch when you move. Then, if a deer appears and you have to move slightly to one side or the other to take a shot, you won’t make any sound. 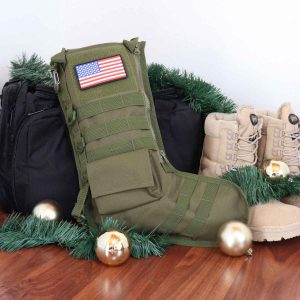 Product description: Hey, everyone else has gone tactical in recent years. Why not Santa Claus, too? At least you’ll be ready when that day comes if the Osage River RuckUp tactical Christmas stocking on the mantel or under your tree. It’s 17 inches tall and 8 wide, with a removable United States flag path at the top. Being tactical, it’s of course got MOLLE webbing, three D-rings, a pocket and two swivel carabiners, too. It’s made of heavy duty nylon and reinforced carry handle to lugging around your loot. Oh, and in case you overbought and are having trouble stuffing everything into one of these, the RuckUp has a side zipper that allows the stocking to expand a bit and fit larger items.

Notable: You don’t have to forget your favorite canine friend. There’s a RuckUp tactical K9 dog stocking, too. See it here.

There’s a reason they call the surge of deer hunters taking to the woods each fall “the orange army.”

According to the U.S. Fish and Wildlife Service’s most report on hunting, fishing and wildlife-associated recreation, America had more than 11.5 million hunters in 2016.

Some states account for a big chunk of that. Texas always leads the way, accounting for 1.1 million or so all by itself. Rounding out the top five are Pennsylvania, Michigan Tennessee and Wisconsin, typically in that order.

Now, not all of those people are deer hunters. But, by most state wildlife agency accounts, 90 percent or better are.

That’s a lot of people with guns.

The New York Times reported a little over two years ago that the U.S. military was made up of 1.3 million active troops, with another 865,000 in reserve.

Assuming that number remains roughly the same, deer hunters outnumber members of the nation’s military by about 5-to-1.

They dwarf the militaries of other nations – Great Britain, France and Germany, to name a few – by even larger margins.

And coming soon: A review of two inline muzzleloaders