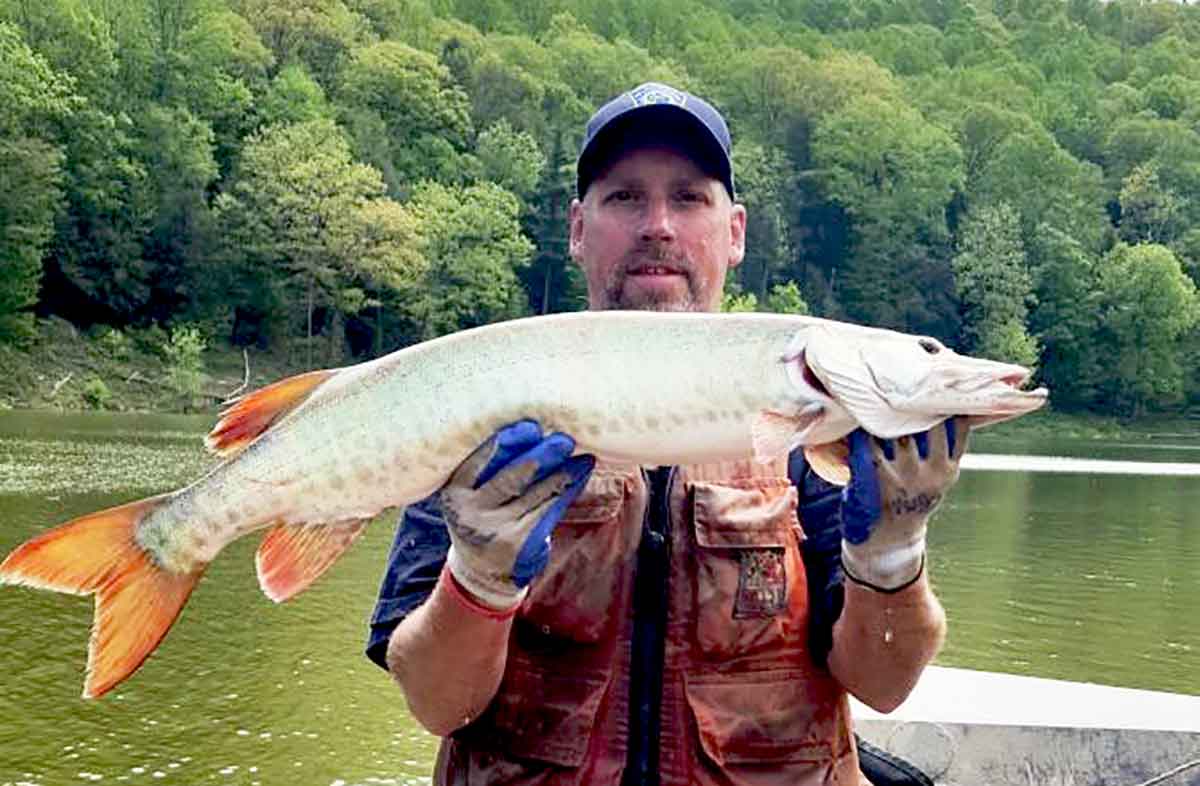 Anglers looking to land a musky like this one held by biologist Brian Ensign have a couple of good options in Pennsylvania.
Photo: PA Fish and Boat Commission.

This is what muskies can do when given the right conditions.

The Pennsylvania Fish and Boat Commission stocks muskies in Frances Slocum Lake, a 165-acre state park lake in Luzerne County. It surveys the lake each year, too, to see how those fish are faring.

The answer is pretty good.

The results of the 2019 survey aren’t available, but those from 2018 are. The numbers aren’t staggering, in part because of weather.

Crews handled just seven muskies, something they attributed to water temperatures. They were too cold to bring more fish within reach of nets, said area fisheries manager Rob Wnuk.

Even so, the catch rate was still above the statewide commission standards for continued stocking.

Most interesting, though, was the size of the fish.

Biologists implant captured muskies at Frances Slocum with PIT – or passive integrated transponder – tags. Each has its own signature.

What that means is, when biologists catch a musky, they can scan it and see if they’ve handled it before. If the answer is yes, they measure its growth.

Not every musky caught once gets captured again, Wnuk noted. And new ones turn up each year. Four muskies – two males and two females, all between 31.1 and 37.3 inches – were caught for the first time in 2018.

This is a 270-acre U.S. Army Corps of Engineers lake in Indiana County. The commission stocked it with tiger muskies starting in the 1970s, but halted the effort in 2017 when biologists decided things weren’t working.

Now, though, something else is.

Mahoning Creek is actually supporting a pretty decent population of purebred muskies. Recent surveys turned up fish between 25 and 39 inches.

They are most likely the result of two purebred musky stockings, done in 2005 and 2006, said biologist Brian Ensign.

So, while there’s as of yet no way to say for sure, it’s likely some level of natural reproduction must be occurring as well, Ensign said.

Still, to boost the fishery, Mahoning Creek Lake will be stocked with fingerling purebred muskies, fish 12-14-inches long, every other year, he said.

Meanwhile, there are a few other species at Mahoning Creek Lake anglers might want to target.

One is channel catfish.

The commission stocks the fish in the lake, and has since the 1970s. The results of the latest monitoring effort are encouraging, Ensign said.

Biologists handled channel cats up to 30 inches and 13 pounds, with multiple year classes providing lots of fish in all sizes. Their catch rate overall was “well above” statewide standards.

Because the lake is home to so much good channel cat habitat – sunken logs, submerged stumps, and a muddy bottom – catfish appear to be reproducing on their own, Ensign said.

The fish, as of last summer, were small. Only 10 percent of the white crappies, for instance, were longer than 9 inches. But some hit the 16-inch mark, and another year of growth may have them at nice sizes now.

Unfortunately, the news for muskies is not so good at Loyalhanna Lake in Westmoreland County.

Another Army Corps lake, this one 480 acres, it’s long been stocked with muskies. But they aren’t catching on.

Commission biologists surveyed it in 2014, 2016 and 2018. They found six muskies the first year, two in 2016 and just one in 2018. Worse, a PIT tag scan revealed it was a tiger musky that had previously been caught in the past two efforts.

But being the only one of its kind – or at least of very few in the lake – muskies are no longer being stocked at Loyalhanna Lake, said commission biologist Mike Depew.

There are other opportunities at Loyalhanna Lake, however.

The “highlight,” Depew said, is the lake’s catfish. The channel catfish are especially impressive. The most recent survey revealed fish well distributed between 7 and 31 inches, “with ample opportunities for anglers to catch some trophy-sized” specimens.

“Our largest fish went over 31 inches and weighed over 15 pounds. Most of our nets had at least one or two channel catfish over 25 inches,” he said.

As for Loyalhanna’s panfish, white crappies are fairly common, with 25 percent of those seen exceeding 9 inches. The largest were just shy of 15 inches and 2 pounds.