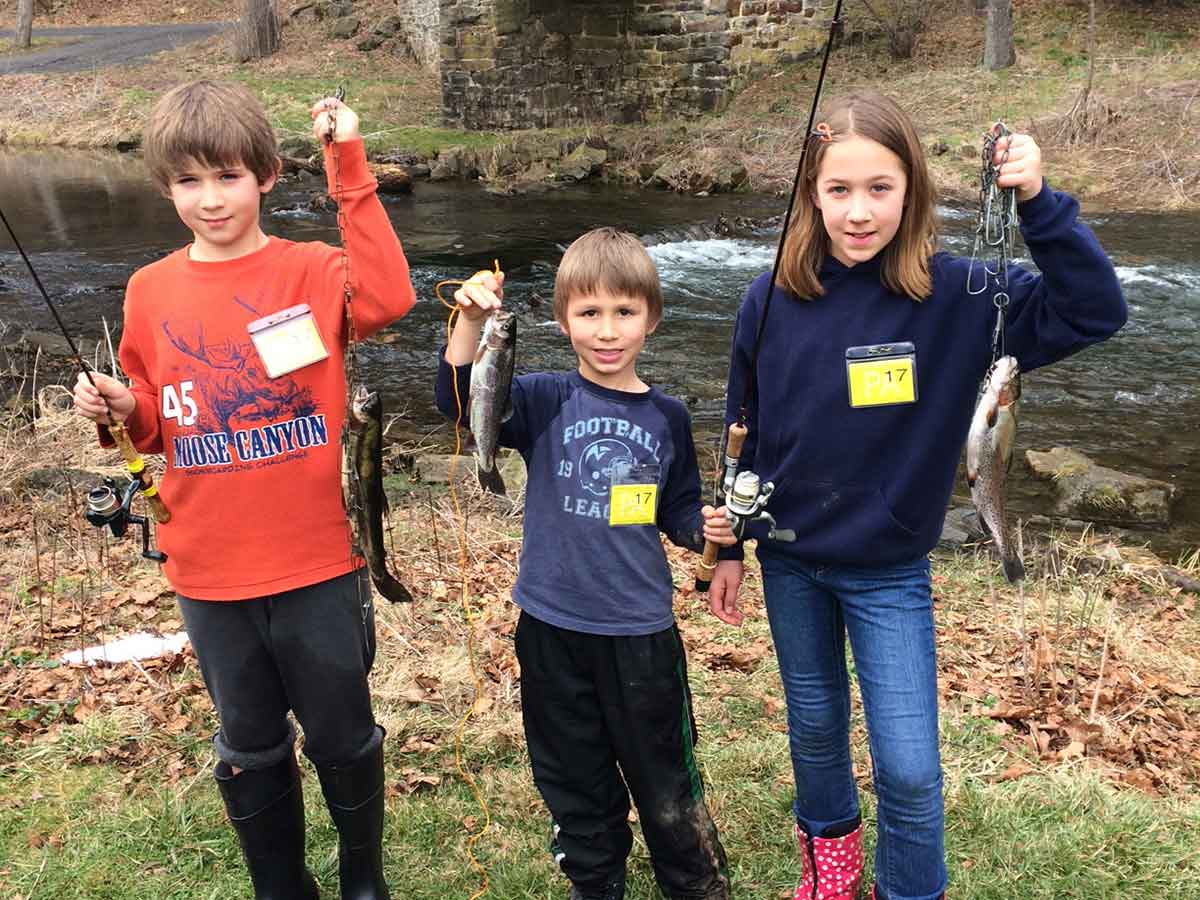 Pennsylvania’s mentored youth trout days give kids younger than 16 a chance to fish without competition from adults.
Photo: PA FIsh and Boat Commission

And yet a small but vocal minority would kill it.

The program launched on a limited basis in 2012. It went statewide on all waters in 2015.

On the two youth days, kids younger than 16 can fish stocked trout waters with an adult mentor. Those mentors can fish, too, though only kids can keep fish.

The goals of the program are twofold, said Carl Richardson, education section manger for the commission.

Goal one is, it gives the commission a chance to build a database of potential adult anglers.

To take part in the youth days, kids have to either buy a $1 voluntary fishing license or get a free mentored youth permit. In either case, they are issued a customer identification number, or CID, that stays with them throughout their lifetime.

“This is very important because it allows us to do a better, more effective job in looking at our recruitment and retention rates, as well as re-activation of youth anglers,” Richardson said.

Specifically, the commission will be able to see how many mentored youth anglers turn into adult license buyers.

And goal two is, “we wanted to give them something they didn’t already have without taking anything away or penalizing other folks,” he added.

That, though, is where the complaints come in. Some anglers feel the youth days are taking fish from them, either at the hands of kids or their adult helpers.

“I get pounded on this all the time as a commissioner,” said board member Richard Lewis of Adams County.

About 9.8 percent of all social media comments concerning youth days are complaints that mentors are abusing the system, Richardson said. Another 3.4 percent say mentors shouldn’t be allowed to fish at all.

Seven percent, meanwhile, complain that kids are taking “their” fish or leaving none for them on opening day.

None of those charges seem to have any real merit.

Richardson said the commission reviewed accusations that mentors are keeping fish, for example.

Beyond some other citations for fishing without wearing a life jacket – something required until April 30 – that was it, Richardson said.

As for the notion that the youth days are removing too many stocked trout before other anglers get a crack at them, the numbers just don’t add up.

“So the worst it could be is 70,000 trout out of the 1.8 million that go out in preseason,” said Andy Shiels, deputy executive director for field operations for the commission. “And when we’re in the field, most of the kids aren’t taking any fish home or they take one fish home.

“So that’s how you can put it in perspective. We look at it in terms of overall impact and it’s minimal.”

And the vast majority of people – most notably those actually participating in it – love it, Richardson added.

“One of the things that I think is really key to this is the target audience is very supportive. The mentors, who are taking these kids,” Richardson said.

In-person interviews in the field and social media posts show support for the program is widespread. Richardson said about three quarters of all comments seen on social media are positive.

He also said the youth days are giving kids time on the water they aren’t getting otherwise.

A majority of mentors who took part this past spring admitted, for example, that though they fished opening day, they didn’t take their kids. There’s just too much crowding and chaos, it seems.

“So we’re providing an opportunity not just for the mentor counting on being able to get out. But it’s a chance to get their kids out and fish in an opportunity just for them,” Richardson said. “They don’t have to deal with all the challenges they often face on opening day.”

For all those reasons and more, commissioners said they support the program.

Board president Eric Hussar of Union County said proof of the program’s popularity is in its growth. The first mentored youth day attracted fewer than 5,000 people. That number had grown each year since, to its current 35,000.

And many of those people come back year after year, he said.

“That’s part of the success right there. They look forward to it every year,” Hussar said.

There’s no denying the value of the information the commission is collecting on young participants, either, said commissioner B.J. Small of Cumberland County.

”When it comes to marketing, there’s nothing like having a great database. To be able to build this, with the youth CIDs, is huge,” Small said.

Commissioner Bill Brock of Elk County supports the program, as well. He added the commission needs to ignore complainers because “the upside is just so far to the good.”

The commission reviews the mentored youth program internally, as it does all of its programs. This is by far the largest of those, and it seems to be reaching its objectives.

So the plan is to continue it again in 2020, on March 28 in 18 southeastern and southcentral counties and on April 11 statewide.

What’s more, the commission will, for the first time, publicize the program and those specific dates in the summary book all anglers get with their licenses.

“The one thing that the (internal review) group agreed is, we’re going to need to accept some negative comments. We can’t please everyone,” Richardson said.

Check this out now: Anglers will see more big and bright trout in 2020