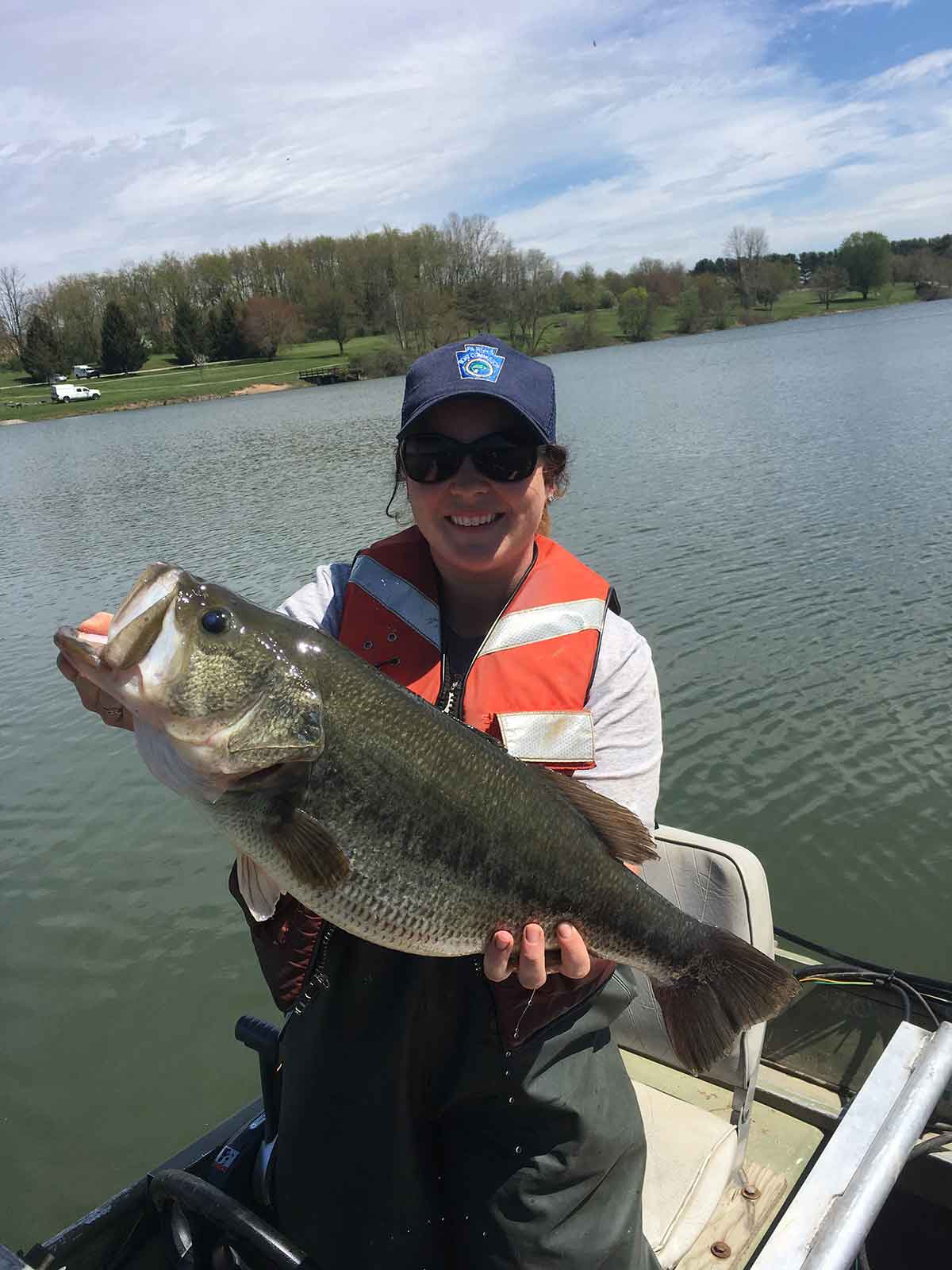 Exaggerations, tall tales, even good natured if otherwise bald-faced lies. Those are often their stock in trade.

But not this time.

Biologists from the Pennsylvania Fish and Boat Commission’s area 8 office in Somerset descended on 25-acre Mammoth Dam in Westmoreland County earlier this year to assess its fish population. They last examined the lake in spring of 2010.

Anglers told them this time around to expect good things.

“There were guys telling us they catch trophy bass in there,” said biologist Mike Depew. “And there were multiple ones who came up to us and said that there’s a 10-pounder in there.

“And sure enough, they were right.”

When biologists pulled in one of their trap nets – usually full of panfish – they collected a 23-inch, 10-pound largemouth.

That’s not far off the state record.

The biggest largemouth ever recorded in Pennsylvania is the 11-pound, 3-ounce fish caught in 1983 – 36 years ago – by the late Donald Shade of Waynesboro. That fish came from the now-gone Birch Run Lake in Adams County.

There have been stories of people catching even bigger largemouths since.

That angler, though, never had the catch verified. Instead, he reportedly released the fish to the water.

And no one’s touched the record otherwise.

Smith said it’s hard to say whether Mammoth Dam’s mammoth 10-pounder could continue to grow and perhaps do that at some point.

Genetically speaking, that bass could have already reached its peak, he said. Or it might not.

If it indeed continues to grow before succumbing to an angler or old age, it likely won’t get a lot longer, Smith said. Instead, it would just pack on additional weight.

It’s asking a lot of a Pennsylvania largemouth to get much bigger than that one already is, he said. But no one can rule it out either.

“There’s always that possibility. That state record is a pretty old one, so it will be tough to beat,” Smith said.

“But there’s always that chance.”

Whatever happens, that monster largemouth is hardly Mammoth Dam’s only bass, or even its only big one.

Commission standards label a bass lake a quality one if it produces 35 total bass per hour of electrofishing survey work.

“Being high like that is not great if the fish aren’t big, however,” Depew said.

But Mammoth shined there, too.

“So those are some pretty outstanding numbers,” Depew said. “We handled numerous 6- and 7-pounders there.”

Anglers can fish the lake using non-motorized canoes and kayaks from May 31 to Oct. 31. It’s open to shore fishing year-round, with good bank access almost the entire way around, and ice fishing in winter.

“And the bass are pretty well distributed throughout the lake. You can find them anywhere,” Depew said.

“So if you’re looking for a good place, a good accessible lake, to fish where there’s a good opportunity for catching a trophy bass, Mammoth is definitely a place for that.”

Other big fish in Mammoth Dam

Need another reason to fish Mammoth Dam besides its trophy largemouth bass?

Biologists a good many of those crappies around the lake’s island, he said. Spring, when crappies spawn, and fall, when they are feeding heavily before winter, would be good times to target crappies there, Depew added.

See also: Largemouth bass are the fish of summer