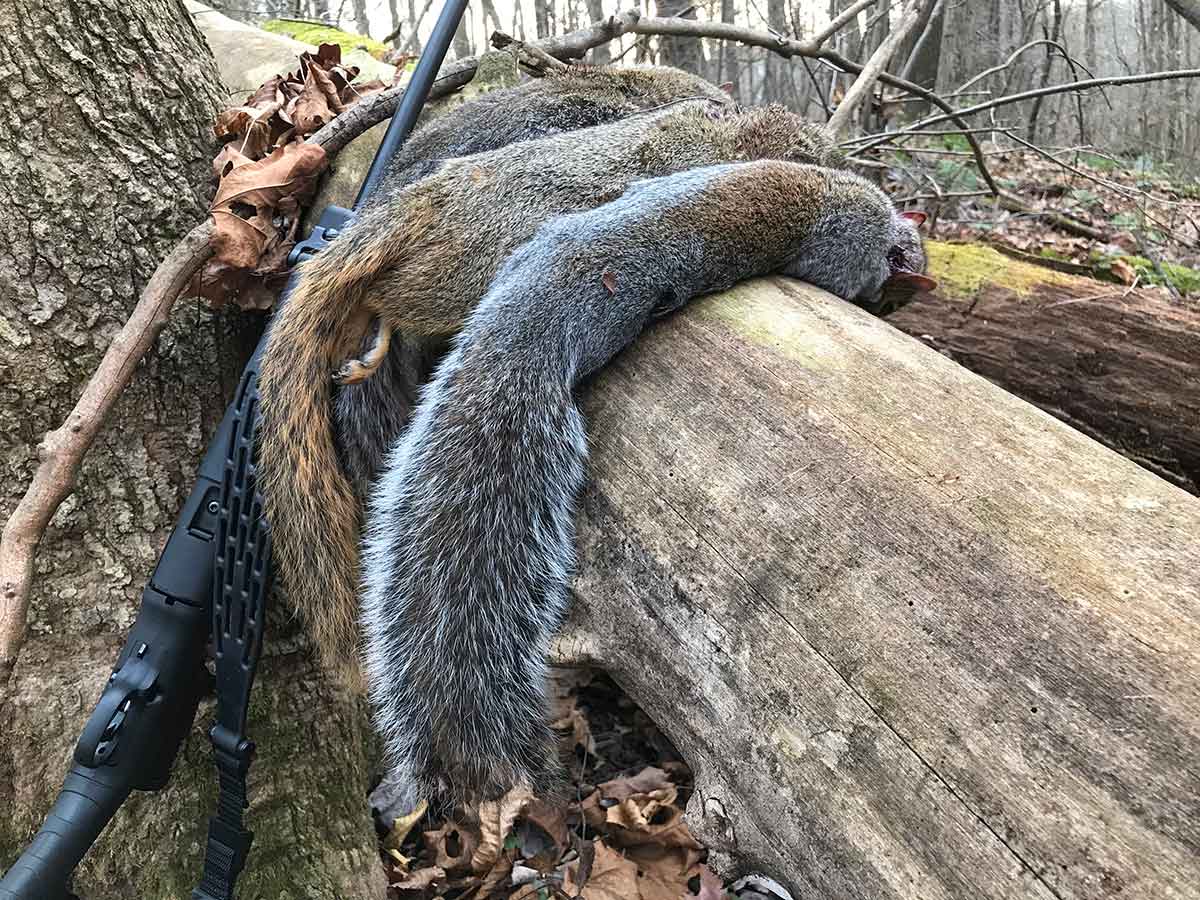 This is not the game you might think it is.

Mention squirrels to the average hunter and he or she probably recalls early October days afield, likely as a young hunter, spent sitting under an oak with dad’s old hand-me-down shotgun. Memories of warm sun, bright leaves and almost foolishly active bushytails leap to mind.

Nice. But not applicable here.

That’s not to say it isn’t fun. It certainly is. It’s an absolute blast, in fact, and a perfect way to wind down from the intensity of big game seasons.

But the squirrels on the landscape now are survivors. The most naive, or least wary, grays and foxes are gone, claimed by hunters or Mother Nature.

Hunting those that remain when temperatures drop and snow falls requires different techniques than were employed earlier in the season.

For starters, unlike the early risers of early fall, squirrels in winter are most often active mid-morning and later.

That’s because, like all wild creatures, living at this time of year requires taking in more calories than they burn. Running the woods at dawn, when temperatures are at their lowest, can put things on the negative side of the ledger.

So hunting from, say, 9 a.m. through mid-afternoon is often most productive.

Mid-mornings on the first warm, sun-soaked day after a stretch of colder, cloudier weather, can be particularly good. That’s especially true if you know the location of den trees where squirrels ride out the cold. Positioning yourself nearby when the weather breaks can be awesome.

As for where to hunt, it’s all about food.

Some mast-producing trees – like pin oaks and walnuts – may still have nuts high in their branches. They’re good to target.

So, too – especially if hunting fox squirrels in mixed hardwood and agricultural areas – are the edges of harvested corn fields.

Generally speaking, though, most of the acorns and other foods squirrels seek are by now on the ground. So scan the forest floor to find squirrels. Binoculars can even be a help that way.

Just be prepared to shoot from longer distances. There are two reasons for that.

First, most of the leaves are off the trees by now. That’s both good and bad for the squirrel hunter.

It makes spotting squirrels easier, of course. But it also makes it easier for them to notice you coming through the woods.

Wearing camo under your orange helps enough to be worthwhile, but squirrels have pretty decent eyesight and escaping notice is tough. You can’t expect to walk up on them now.

Second, there’s the ground itself.

Stalking squirrels in winter works if you’re out after a thaw. But otherwise it’s tough to be quiet when moving. The frozen ground is often just too crunchy under foot.

So forget the shotgun. Instead, a rimfire rifle – be it a .22 or .17 – loaded with hollow points is the perfect tool, at least if you can place all your shots out to 50 yards in a circle the size of a quarter.

Finally, a squirrel call can help, if used sparingly.

Call too often in the relatively sparsely-dressed woods of winter and a squirrel may very well pinpoint out your location. That’s especially true if you move too much while making squirrel sounds.

But an occasional bark can sometimes be just enough to get squirrels to respond and perhaps show themselves.

So make a point to hunt some squirrels this winter. Seasons are long, squirrels are plentiful just about everywhere and bag limits are liberal. Squirrels are good eating, too, lending themselves to all kinds of preparation for the table.

And there’s just something really satisfying about bringing home a limit at this time of year, when you often have the woods all to yourself.

Squirrels may seem small after months of chasing whitetails. But don’t be fooled.

The challenge they offer, especially at this time of year, is real.