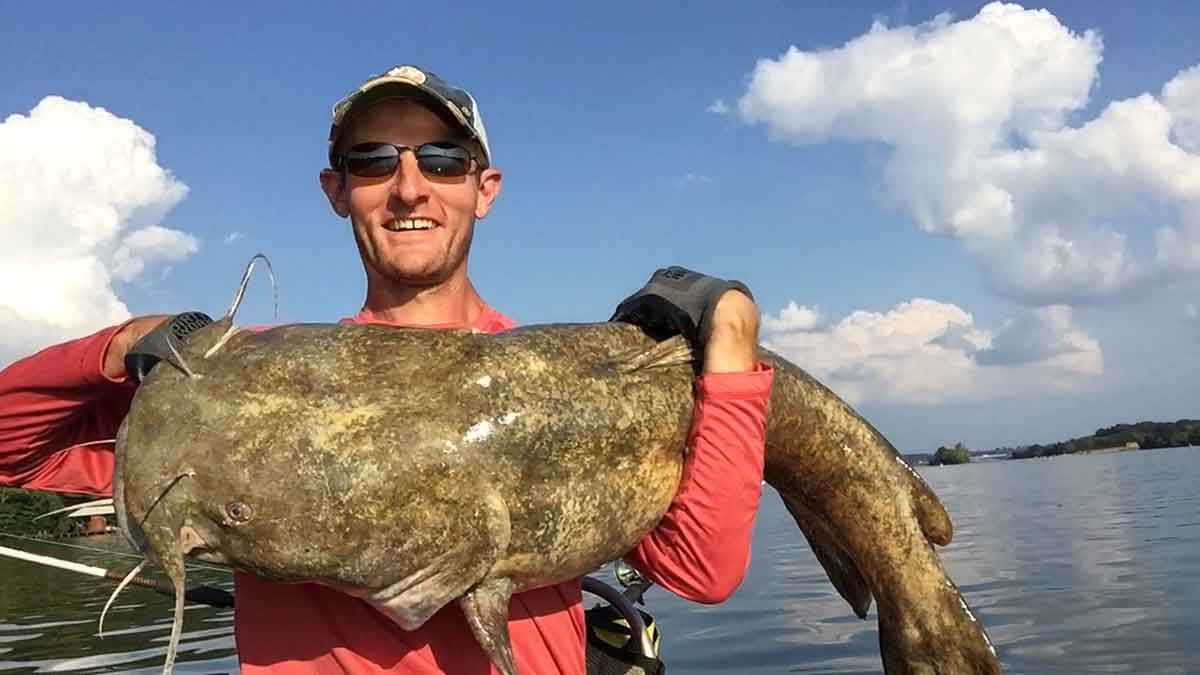 But it’s not out of the realm of possibility.

Blame it on a change of heart and a change in equipment that followed.

Johnston, an East Tennessee native, was a bass fisherman early on. Then, in a tackle shop one day, he saw a photo of a man holding a giant catfish. He decided to catch one, too.

It took a bit, but Johnston eventually landed a 20-pounder, and it was game over. Or game on, perhaps.

Either way, he never went back to bass.

Instead, fishing the Tennessee River primarily, he pursues big blue and flathead catfish. Already this spring he landed several approaching 50 inches, and one blue exceeding it.

He didn’t weigh that fish, but it likely went between 50 and 70 pounds, according to a weight-length chart from the Missouri Department of Conservation.

Johnston can’t say for sure.

“But it was hernia-inducing size, is what I call it,” Johnston said with a laugh.

It is indeed a gut-busting struggle to lift a fish like when you do all your fishing from a kayak, as Johnston does. But his Hobie puts him on more big fish than anything else.

More and more anglers are figuring out the same thing. Kayak catfishing is shaping up as the next big thing.

“I catch far more fish now than I ever did fishing from the bank or even from a boat,” said Ron Himmelhaver of Tennessee, who manages Trophy Catfish Kayak Anglers and organizes a growing number of tournaments.

Mobility is probably the biggest advantage they offer, said Spencer Bauer, owner and fishing guide with River Certified in Iowa. Where he lives there are a fair number of fishermen, but limited water. 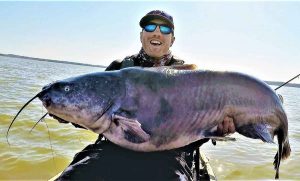 Spencer Bauer caught this big catfish from his NuCanoe.

His kayak allows him to reach the best spots, or at least the least pressured ones.

“But if there are no fish there to be caught, you’re not going to catch anything.”

Then there’s the pace.

An angler in a kayak can fish pretty much anywhere and any way an angler in a powerboat can, Himmelhaver said. It does take longer to move from spot to spot, though.

But that’s often a positive.

“I think the thing it does is it teaches you to be a bit more methodical about covering an area,” Himmelhaver added.

Kayaks are also great tools for fighting fish, he added. He’s a NuCanoe guy, like Bauer, and wider ones allow you to fight fish standing up directly over them.

“You tend not to get snagged up nearly as much in a fight because that fish, especially a big one, moves your kayak immediately. So very quickly you end up in almost a vertical battle,” Himmelhaver said.

“You literally ride over that fish the whole time.”

Of course, to fight a fish you first have to find and hook it.

Accomplishing the finding part happens in a couple of ways.

Drifting is one. On reservoirs, Bauer uses a drift sock on his boat if necessary so as to go no faster than about one-half mile per hour. He floats over contours that concentrate fish by serving as catfish travel routes.

He pulls nightcrawlers along behind him for channel cats, cut baits like shad and bluegill chunks for flatheads.

“And there’s always a rod or two with something obnoxiously big on it just to see if something will eat it,” he said. 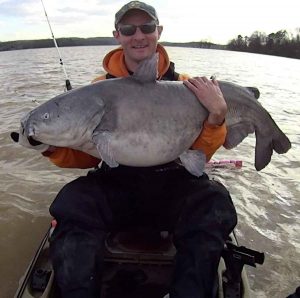 Blue catfish can reach weights of more than 100 pounds.

Himmelhaver drifts at about the same speed, but on rivers, using palm-sized chunks of shad and skipjack herring to target blues and flatheads.

The trick, he said, is to use sonar to find ledges in the main river channel. He paddles up river, positions himself along that ledge, drops his bait to within two or three feet of the bottom, and drifts back.

“Catfish use those channels like a highway. They just patrol them looking for opportunities to eat,” Himmelhaver said.

“I’ve found that to be one of the most effective ways to catch catfish that I’ve ever used in my life.”

Johnston also fishes around structure and cover. He looks for ledges, points, creek mouths, humps, submerged roads and railroad beds, flooded houses and the like.

All serve as current breaks, he noted.

“Nobody wants to walk on a treadmill all day and no fish wants to swim in current all day. So if you can find those places, you’re gold,” Johnston said.

But he’s gone away from drifting to anchoring. And not like in the old days.

When he first started catfishing, he anchored over multiple places in a day. This year, he’s experimenting with sticking in one spot for hours.

He suspects he’ll catch fewer fish, but more big ones, and more flatheads.

“I want to find out if just parking myself on specific pieces of structure will improve my overall fishing,” Johnston said.

“There’s just something about sitting on good structure and waiting for fish to come to you versus always being on the move and looking for active fish. I feel like I’ve been missing a lot of fish.”

So far, he said, he’s already caught more flatheads than ever before, and gotten lots of big fish, like that 50-incher.

As for hooking fish, that takes stout gear.

Bauer uses Ambassador 6500 or 7000 series reels, spooled with 85-pound braid and a 40-pound or 80-pound monofilament leader, depending on the catfish he’s chasing.

Himmelhaver tops similar lines with 10/0 circle hooks. His rods, meanwhile, are heavy, “basically a broomstick with eyelets,” he said.

Johnston uses lighter rods, to make fighting 5- to 15-pound fish fun. But he uses heavy weights: up to 8 ounces when drifting, to keep baits down when the kayak is blowing around, and 2-ouncers when anchoring.

Bauer suggests anglers start with whatever gear they have, though. Growing numbers seem to be getting the message.

“I wouldn’t call it huge yet,” Bauer said of the sport. “But it’s getting bigger.”

Johnston, certainly, is glad he switched. Catfish are fun anyway, he said. Battled from a kayak, though, they extra rugged.

“You hook into a big catfish, I don’t care what kind of tackle you’re using, it’s going to take you a few minutes to land that thing,” Johnston said. “And that’s fun to me.”

Kayak catfishing at its craziest

OK, so imagine this.

Tangling with a 20-pound catfish is fun. But what if you have four 20-pounders on four lines at the same time?

“It’s not uncommon to have all four rods go down when you go through a school of blues,” said Justin Johnston. “You might have 15- to 20- to 30-pound fish on all four lines at the same time.

“And you just can’t buy that kind of fun.”

Ron Himmelhaver knows. He calls having four fish on simultaneously that way the “most beautiful chaos you have ever experienced in your life.

“It is the most fantastic stress I have ever had to endure,” he said.

But then, chasing big fish in small boats is all about excitement. Certainly there’s no confusion when you get a catfish bite – even one – in a kayak.

“When they hit, they spin you around,” said Spencer Bauer. “You could not be paying attention at all, and all of the sudden you’re looking a different direction and line’s peeling off your reel.

“And it doesn’t take that big of a fish to do that. A 10-pound channel cat, even an 8-pound channel cat, he’s not going to turn you around like a big blue would, but you’ll definitely be aware that you got a bite. There’s no mistaking it.”

Landing a catfish in a kayak is a fun challenge.