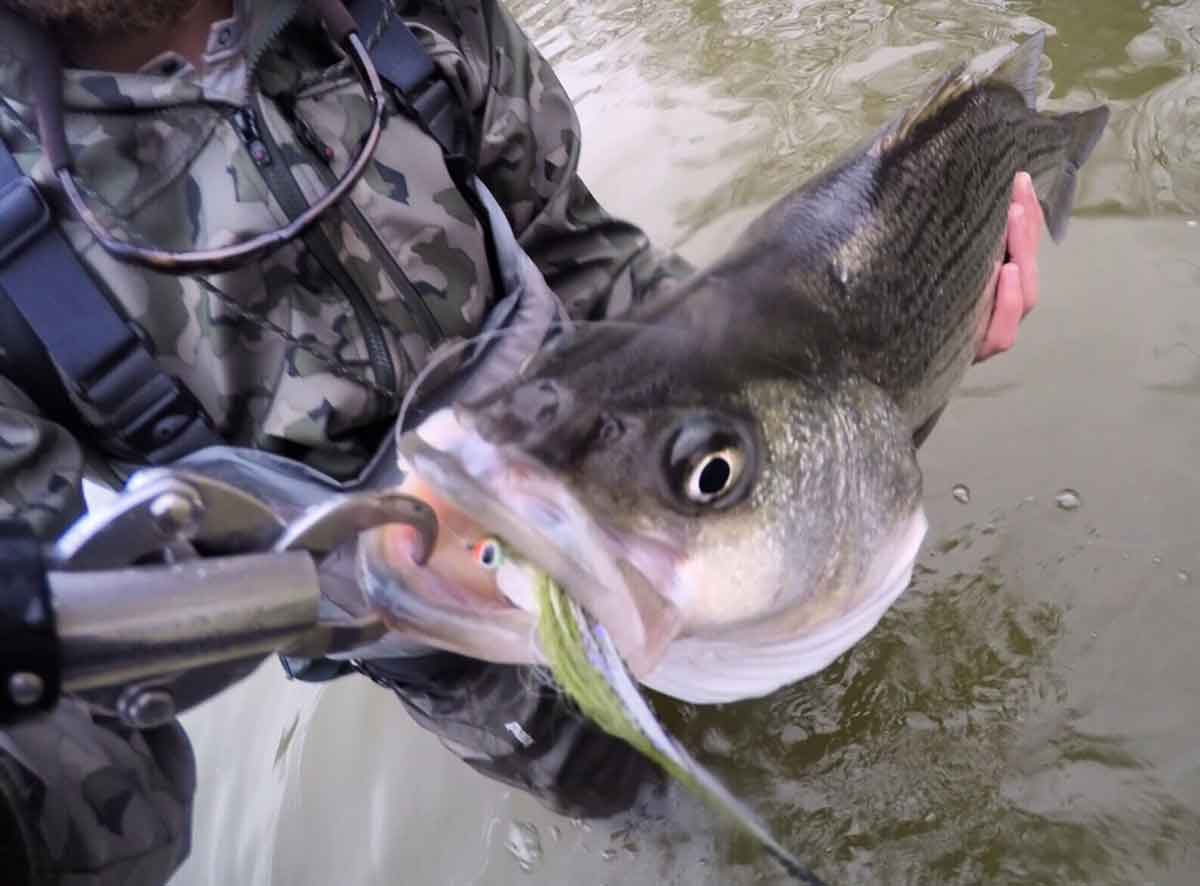 They are not subtle, these bruising brawlers.

Some fish have the reputation of being almost refined. Angling literature, for example, mythologies brown trout for the way they selectively and daintily sip dry flies perfectly presented by the most reverential fishermen pure of heart.

Sleek, athletic, strong, they fight hard when hooked. But they play by gentlemen’s rules even then, we’re told, protesting only in the Queen’s English on the way to the net.

They travel in mobs, like marauding Viking hordes, looting and pillaging their way through schools of alewives and shad. Imagine a berserker, ripping the flesh from something like a giant turkey leg in great chunks, then tossing the bone away to clatter on a pile of carcasses.

That’s how hybrids eat, with unconstrained and unrepentant fury.

“Every once in a while, you’ll be out there and it will be like somebody just randomly threw a bowling ball somewhere in the lake. And you think to yourself, there’s one alewife off the list,” said Ian Brown of Pittsburgh, a fly fishing trip leader with Venture Outdoors. 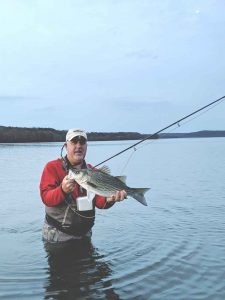 “When these fish eat, they eat very aggressively.”

It’s a feeling easily transmitted up a fly rod.

Hybrids – sometimes called wipers — are a cross between a white bass and a striped bass. Numerous states stock them.

Because they’re sterile they tend to grow quickly. According to the Pennsylvania Fish and Boat Commission, they typically reach 20 inches and 4.4 pounds in as little as four years. In seven, they can go 25 and nine-plus pounds.

They’re rugged at those sizes.

The Ohio Division of Wildlife calls them “pound for pound, one of the hardest fighting fish swimming.”

And this is prime time for catching them.

In lakes in particular, spring brings them into the shallows – and within reach of fly anglers — as they follow spawning alewives and shad. Brown targets them on Lake Arthur on Moraine State Park.

For four to six weeks, from about mid- to late April to the end of May, “they’re eminently available to a fly angler tossing floating line,” Brown said.

“And they’re great fun when that happens,” he said.

It’s the battle that makes it so. Hybrids not only hit hard. They go on ridiculously long, fast, powerful initial runs when hooked.

Brown says they can “reliably run you into your backing.”

“You set the hook, lift the rod and the fish will just decide it wants to be on the other side of the lake. And there’s really nothing you can do to stop it,” he said.

The fly fishermen’s hybrid striper season lasts longer in rivers, Nicholson said. On those like the Little Miami and Whitewater in particular, anglers get them from spring through early fall, he said. 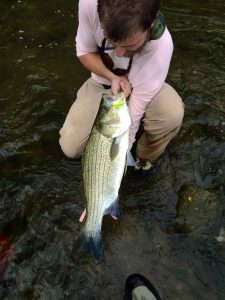 The gear used in all cases is pretty much the same.

Brown and Nicholson both recommend an 8-weight rod. Anything lighter won’t have the backbone to handle big fish.

Big flies – six inches and longer – are the order of the day, too.

“We’re trying to mimic that shad pattern, and those fish can get pretty big,” Nicholson said. “So you’re using a nice big fly with a big profile that’s easy for the stripers to see.”

Nicholson said the two most popular flies in his area are the half and half, a “combo Clouser minnow, deceiver pattern,” and a double deceiver. It’s an articulated fly with two hooks that offers a lot of movement.

Brown throws streamer patterns like the midnight mullet, Murdich minnow, Clouser suspenders and lazy stripper. Topwater patterns that make a bit of commotion, though not too much, like the Gartside gurgler, work, too.

Both prefer flies with a lot of chartreuse and white in them and, in Brown’s case, “a fair bit of flash.”

They prefer different fly lines, however. That’s because of where they’re fishing.

Brown, on Lake Arthur, likes on a floating fly line.

Hybrid stripers there follow baitfish to the shallows. But they don’t necessarily hang out in that skinny water. Instead, they prefer to “lurk” relatively deep, them come up and ambush bait near the surface, he said.

So he presents his flies within six inches or so of the surface in spots where there’s some sort of defined edge, like an old road bed, submerged railroad trestle or sand bar.

A prime spot, he noted, is anywhere where he can stand near the edge of one sandy flat and cast beyond the edge of another, with a deeper valley between them. That offers two edges in one spot.

“It doesn’t have to be some sort of radical deep dropoff,” Brian said. “It’s just got to be some sort of bottom structure that creates a defined edge where these fish can sit a little deeper and feel safe and at the same time look up and ambush things on top.

“Most of the fish that I hook are probably within not too much distance of one of those edges.”

Nicholson, chasing hybrid stripers in rivers, throws an intermediate, or slow sinking, fly line. That’s to quickly get flies like the half and half – which has a lot of buoyant bucktail – down to fish in pockets of moving water.

As to where to throw flies, hybrid stripers in rivers are especially nomadic, he said, following bait in a here today, gone tomorrow fashion. That requires persistence.

“You’re putting a lot of hours in on the stream between fish for this species,” he said.

Ideally, you can find fish feeding, or “busting bait.” Then, he said, you simply cast into the chaos.

Short of that, there is one way to narrow things down.

“You’re looking for what we call pinch points in the river,” Nicholson said. “Places where the fish are chasing bait and just get pinched up.”

Riffles can be an effective roadblock, he said. The tailwaters below dams are great spots to try for the same reason, say Kentucky’s Department of Fish and Wildlife Resources.

In lakes and rivers both, the best fly fishing is in the first few hours of daylight and the last couple of hours before dark. Hybrid stripers also hit after dark, too, though.

But however and whenever anglers get them, hybrid striped bass are a treat. Fish up to 30 inches aren’t unheard of, and 22- to 26-inchers are pretty common in good waters.

“When you feel one, there’s no, ‘Was that a strike?’ There’s no question about it. You know when your fly’s been chomped on because they’ve just stopped it dead,” Brown said. 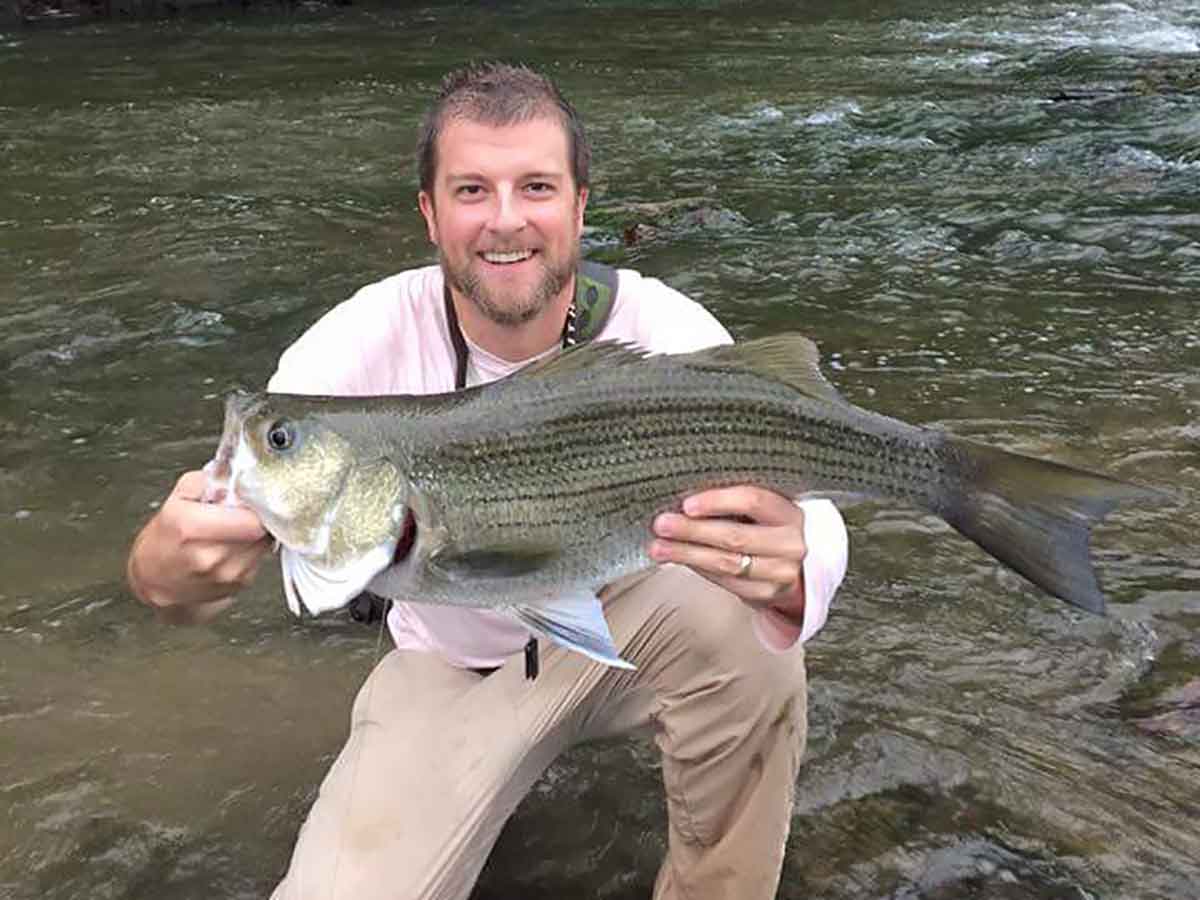 Hybrid striped bass are nomadic, so anglers targeting them in rivers especially have to put time in.
Photo:” Ted Nicholson

Not a fly angler? There are other ways to catch hybrid striped bass.

When the fish go deep, catch them on jigging and trolling spoons, the Department says. Trolling crankbaits works as well.

“Surprisingly, chicken liver fished on the bottom or suspended is also a great bait for hybrid striped bass,” it adds.