Hocking Hills worth a visit around the crowds 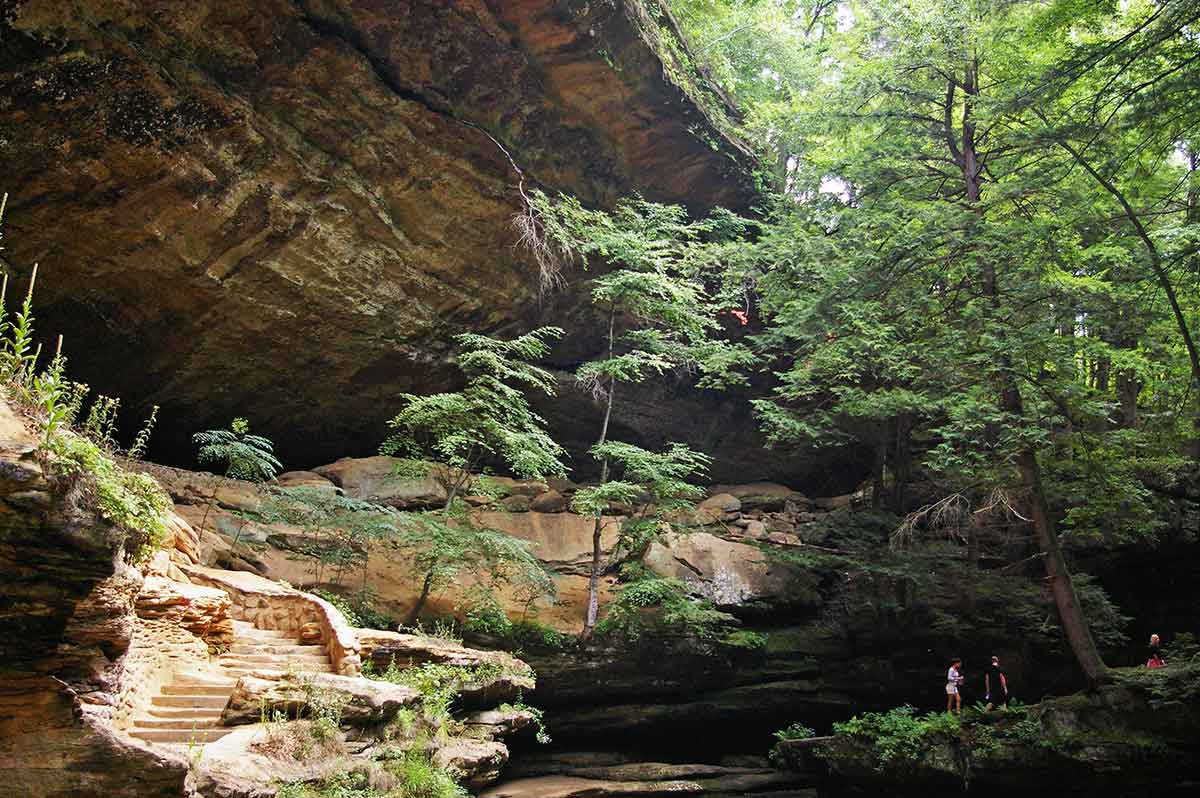 That’s an old tune from Sesame Street. It teaches children to identify differences in colors and sizes and shapes.

It’s not the theme song of Hocking Hills State Park.

But it could be.

The park – a heartthrob of a destination for hikers, mountain bikers and equestrians, among others — is located in southeastern Ohio, very near the West Virginia panhandle. That’s noteworthy.

Visit most state parks in Ohio, especially those in the western half of the state, and one thing that stands out about them, topographically, is how flat they are.

Hocking Hills is the exception to the rule.

It’s not mountainous by Western standards. But it is, as its name implies, a land of ridges and valleys, hollows and caves, waterfalls and cliffs, often steep and sometimes rugged.

It’s no surprise then that it’s long attracted crowds. The earliest evidence indicates people moved into the area more than 7,000 years ago.

According to park officials, Native Americans lived in the Hocking Hills area through the mid-1700s. American settlers followed, officially, after the signing of a treaty in 1795.

Of course, few were likely as interesting as Richard Rowe.

His family moved to the Hocking Hills area in 1796, traveling from Tennessee to establish a trading post. But Rowe was a wanderer, unwilling to stay put and comfortable with the solitude of the woods.

So, together with two hound dogs, he hunted his way through Ohio, following the Scioto River. 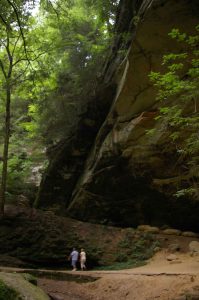 On one of his trips, while exploring along Salt Creek, he came upon a giant cave in what is now Hocking Hills State Park. He moved in, living the life of a hermit, and his neighbors dubbed the rock hollow “Old Man’s Cave.”

Rowe is reportedly buried under its rim, along with two brothers living in the area around the same time.

They’re all long gone. But the cave – and more specifically, the stone that shaped it and the surrounding countryside – continues to draw visitors to the park today.

“The natural history of this region is as fascinating as it is beautiful,” said Ohio’s state parks.

That history focuses on rock. Black hand sandstone predominates here. Deposited more than 350 million years ago, some of it is harder than the rest. As a result, it eroded unevenly.

Old Man’s Cave – as well as Ash Cave, Whispering Cave and Cantwell Cliff, other features in the park – show how some of the rock washed away and some didn’t, with spectacular results.

The plants here are a result of that geologic history, too.

Glaciers never reached the park. But they came close enough to influence its vegetation.

“The glaciers changed the climate of all Ohio to a moist, cool environment. Upon their retreat, this condition persisted only in a few places, such as the deep gorges of Hocking County,” park officials say.

“Therefore, the towering eastern hemlocks, the Canada yew and the yellow and black birch tell of a cool period 10,000 years ago.”

Today, all of that makes Hocking Hills State Park a wonderful place to explore.

There are 11 hiking trails that run through the park, as well as two mountain biking trails and 33 miles of bridle trails.

None of the hiking trails are especially long. Six miles of the Buckeye Trail passes through; most of the others cover a mile or less.

It’s possible to connect several of them on any given hike, though, and so cover more ground.

One of the easiest, and newest, is the Whispering Cave Trail, which leads to the park’s second-largest cave and a seasonal 105-foot waterfall. It was all off limits to visitors before 2017.

But all of the trails can be treacherous – most are even ice-covered in winter — given the cliffs and gorges, so park officials urge visitors to stay on designated paths and use caution.

Another piece of advice, not delivered by the state but by visitors themselves, is to visit on weekdays or in the offseason if at all possible.

Hocking Hills State Park draws huge crowds. Huge enough that sometimes you feel less like you’re hiking and more like you’re standing in line at the department of motor vehicles.

Rowe, were he to show up on a summer Saturday now, would grab his hounds and be gone in a flash.

But that’s no reason not to visit. The park, especially early and late on fall weekdays, when the summer crowds and those who sleep in or rush to get out of the woods before dark are all gone, is a blazing, multi-colored treasure worth exploring.

After all, one of those things is not like the other.

There’s plenty to do there. In addition to trails, the park boasts an archery range – with five static targets and 22 3D ones – as well as a 17-acre lake that allows fishing and paddling. The park also has a disc golf course, visitor center and picnic areas. Hunting is permitted in certain places as well.

And, if you want to spend more than a day taking all that in, the park offers camping. There’s a campground suitable for everything from tents to RVs, as well as cabins and slightly more primitive “camper” cabins and yet more rustic shelterhouses.

See also: Hiking through the sky, below it at Kinzua Bridge State Park