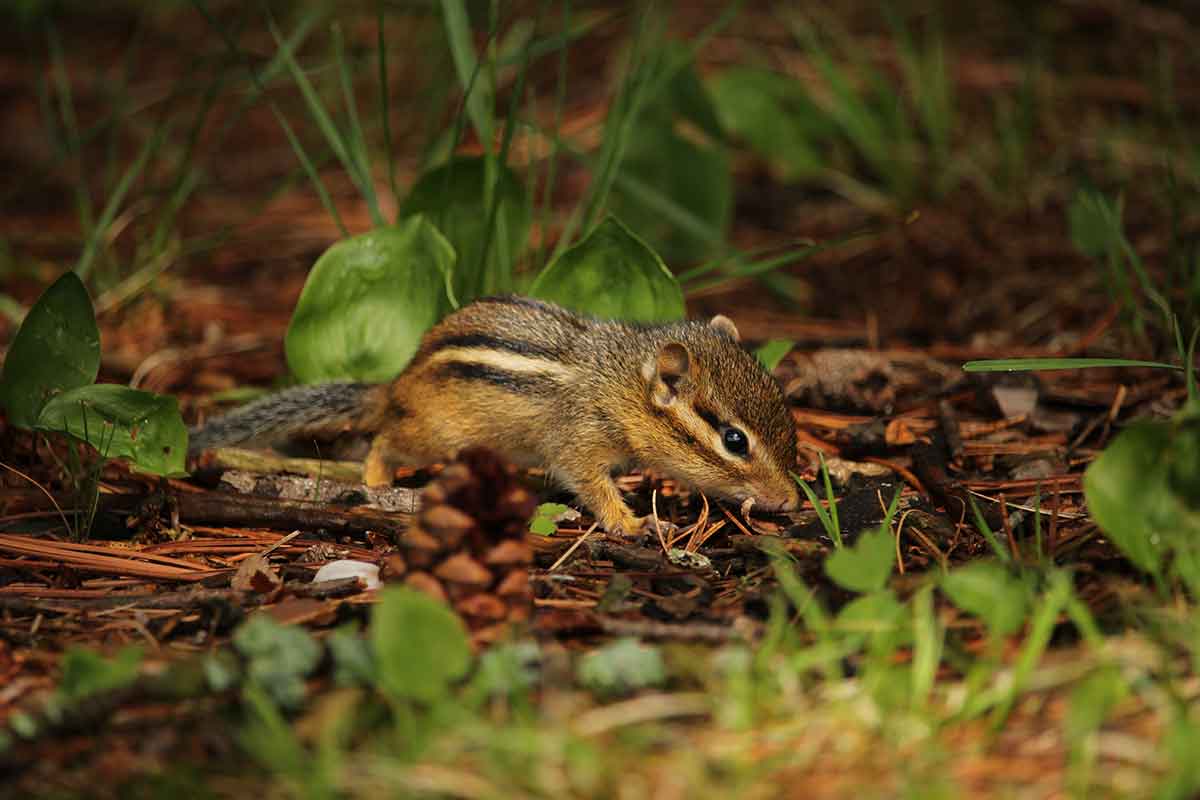 Chipmunks are one species that hibernates to survive winter.
Photo: Pixabay

I never even got to say goodbye.

My wife and I were hiking on a recent Sunday afternoon, following a trail through a state forest near our home. It was cool but not cold, just chill enough that the crisp leaves crunched beneath our feet with each step, like so many thousands of frosted flakes.

That’s what gave him (or her) away.

As we rounded a bend, a chipmunk – frantic as they seemingly always are – jumped from the leaves onto a log and then onto a bowling ball-sized rock, pale gray and topped with a bright green moss buzz cut. He stared, frenzied even in stillness, his panting sides going in and out like a miniature bellows. An acorn stuck out of his mouth.

In that half second, I started to raise my camera. Then he was gone.

He dove off the rock with a squeak and buried himself in the leaves. We waited a moment, thinking he might reappear, but he did not.

That “grinny,” as my grandfather called his kind, was far from a solitary soul.

We heard and saw countless other chipmunks on our walk. They were noisily and feverishly scurrying about, stocking up on seeds and nuts and other foods.

Soon, though, they’ll all vanish and the winter woods will take on their seasonal hush.

Winter doesn’t officially arrive each year until the latter half of December. But it’s tough on wildlife no matter what the calendar says. Cold temperatures and scarce food supplies make it a battle for any creature to take in more calories than it burns.

Some flee those harsh conditions, migrating to more hospitable places. Many bird species operate that way.

Others – mammals like white-tailed deer, otters, coyotes — just tough things out. They stay home, so to speak, but move less and conserve their fat reserves.

But the hibernators have perhaps the most interesting survival strategy. When the world is at its harshest, they retreat into themselves. They undergo physiological changes, such as lowered body temperature, decreased heart rates and slowed breathing.

That allows them to burn their body’s fat reserves much more slowly than if they were awake and active.

“Some ecologists refer to hibernation as ‘time migration,’” said Penn State University experts. “Hibernation allows the animal to skip over the cold, stressful seasons and only expend itself fully in those months of abundant food and moderate climatic conditions.”

Among hibernators, some display what’s called “predictive dormancy” meaning they go into hibernation about the same time each year. That’s triggered by seasonally decreasing daylight.

Others exhibit “consequential dormancy,” meaning they go into hibernation only in the face of extremely cold conditions.

Even beyond that, now all hibernators are the same.

Some are “true” or “deep” hibernators, while others merely go into periods of torpor.

Black bears, for example, den for the winter. But they are not true hibernators in that they can and often do get up and move around periodically during winter.

Unusually warm weather and winter rains, among other things, spark that behavior at times.

They spend winters in underground dens prepared in advance. At their most torpid, their heart rate slows from 350 beats per minute to four or five, and their body temperature goes from 106 degrees to as low as 42.

But, according to the Pennsylvania Game Commission, they, too, often awaken to engage in periods of activity.

“Wintering behavior varies,” it said. “In one research project, 63 percent of the chipmunks studied became torpid to some degree. Another researcher cited 30 percent as becoming torpid and classified 60 percent as non-hibernating. In two studies, inactive periods lasted from 1 to 8 days.”

By comparison, true hibernators disappear when the weather gets bad and “sleep” until spring and better conditions arrive.

Bats, some species of mice and reptiles and amphibians operate this way. So, too, do woodchucks, also known as groundhogs.

According to New Hampshire Fish and Game wildlife experts, woodchucks grow fat on summer’s lush mix of vegetation. Then they retreat to winter dens. Those are often separate from their summer quarters.

“While hibernating, their heart rate decreases from 105 beats per minute to about 5, and their body temperature drops from roughly 104 degrees Fahrenheit to about 38 degrees.”

However dramatic the changes or deep the slumber, though, hibernation is a pretty amazing survival mechanism.

So enjoy all the life visible in the woods and fields right now.

But don’t despair when it’s gone. Know that the quiet of winter – refreshing in its own way – will soon enough give way to the hustle and bustle of life awakening again soon.

And coming soon: A look at ways to get young children interested in nature through art