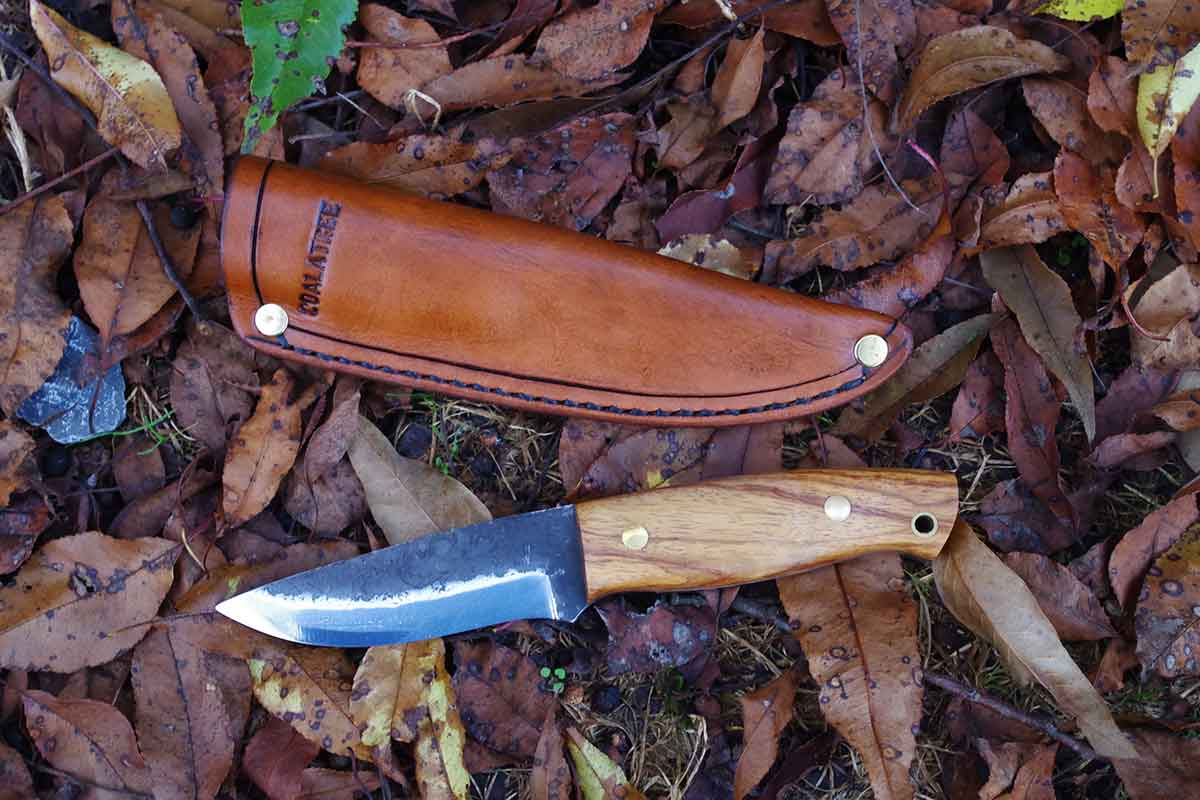 The Haswell survival knife by Coalatree is not only functional, but really nice to look at, too.
Bob Frye/Everybody Adventures

Survival situations are by their nature short on chances.

In tough conditions, under difficult circumstances, with limited resources, you seize on finite opportunities when and where possible and live to fight another day. Or you don’t and become a statistic.

That’s why this is so exciting.

Here is a second chance.

Four or five years ago, Utah-based Coalatree Eco-Minded Goods produced what it called its Haswell survival knife. It featured a hand-forged blade of high-carbon 1095 steel, a walnut handle with brass pins and a hand-stitched, veggie-tanned leather sheath.

It got, from what research I’ve done, universally wonderful reviews.

And then it disappeared. 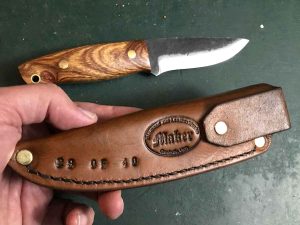 Produced in limited quantities, it sold out quickly. Bushcrafters, hunters, survivalists and knife collectors who didn’t get in on them early lost out.

Until now, that is.

Recently, I got the chance to test out version 2.0 of the Haswell. And boy, it was obvious in a hurry why this knife was so popular before.

Right out of the box it catches your eye, equal parts rugged and artsy. Artisans forge each full tang blade from a single piece of steel. Its Scandi ground cutting edge – meaning wedge-shaped — is shiny and razor sharp. Meanwhile, the upper half of the blade is dark and retains some of the texture created by being hammered on a forge.

That’s simply cool in a way that a mass-produced knife from a factory can’t be.

Paired with the hand-stitched sheath made by Diamond Jim Leatherworks, no two are exactly alike. And it just looks gorgeous.

It’s no wonder some collectors will assuredly put theirs behind glass on a shelf rather than ever carry into the woods.

But the real mark of a survival knife, of course, is its functionality. 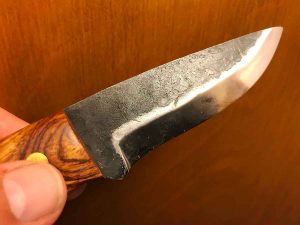 This latest version of the Haswell shines there, too. It’s is a wee bit shorter than its predecessor, at 8 inches overall with a 4-inch blade.

But it held up well – with no indication that would change with additional use – in testing.

That starts with the blade.

High-carbon, 1095 blades are known for two things. First, they are strong and hold an edge well. Second, they rust relatively quickly if not properly cared for.

They come with a light coat of oil on the blade. I’ve tried to maintain that and so the knife I tested hasn’t rusted at all.

And it has certainly performed. Figuring that a survival knife by design will be the one and only one you have on hand in an emergency, I used it for everything from whittling fuzz sticks to batoning larger logs to field dressing a deer.

It handled each task very well.

The Haswell felt good in the hand all the while, too. Sturdy, comfortable, and not too obtrusive, that’s how I’d describe it. Just practical, really.

This knife weighs 14 ounces, with a 3/16 inch tang. It’s large enough to tackle serious jobs, but not so big and unwieldy that you leave it at home rather than strap it to your hip.

I could certainly see this being the one knife you take on a camping trip, be it one where you pitch the tent next to the car or set up camp miles from the nearest road.

Like version 1.0, though, this latest offering of the Haswell survival knife is again being made in limited quantities. It’s available for pre-order now at a discount ($85 versus the usual $159).

You can spend less and get a big box store survival knife, and some of them are certainly fine.

I’ve got my share of blades alright. It seems no matter how many pocket knives and hunting knives and fillet knives I collect, there’s always room for one more.

But this one seems special. If you want something really unique, a workhorse knife that you’ll find yourself turning over and over in your hand to admire when not actually using it, the Haswell is worth considering. 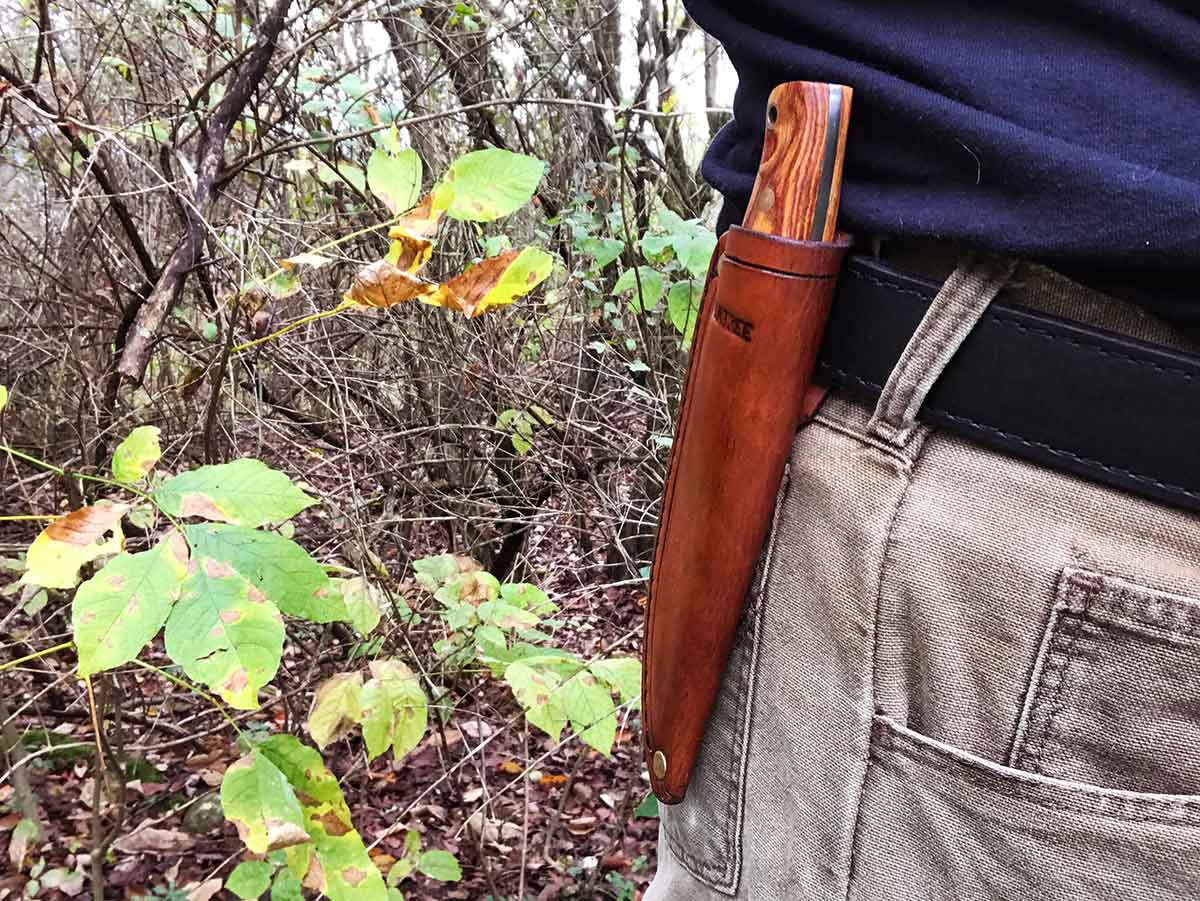