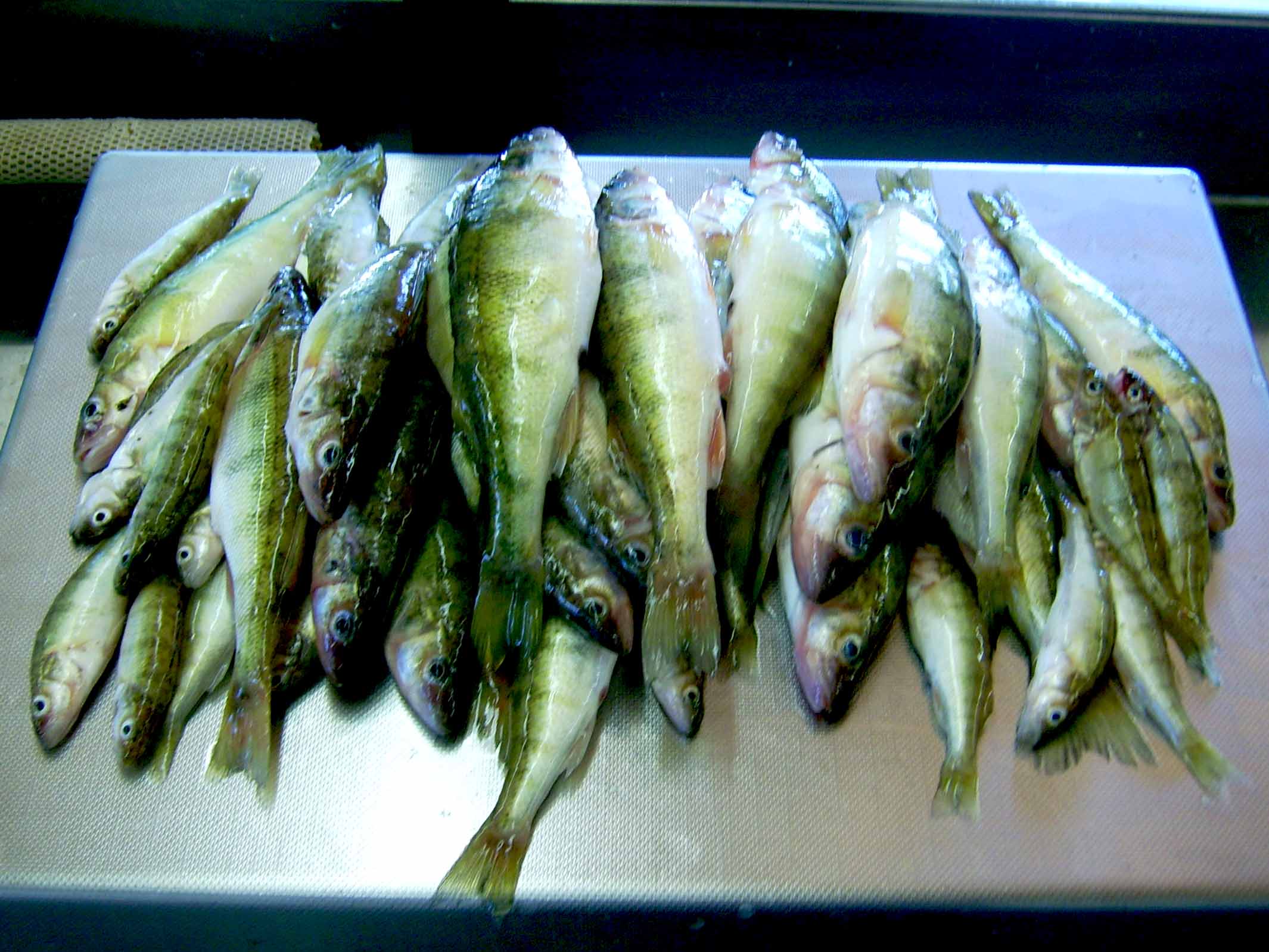 Fishing for yellow perch on the Great Lakes can be productive.
Wiki Commons image

This isn’t necessarily what you would call run and gun fishing.

But it is increasingly a game built on mobility.

Catching yellow perch on Lake Erie – or on any of the Great Lakes, really – used to mean going out, finding a school, anchoring over it and having at them. And some anglers still operate that way.

But the “gurus” of perching today do things differently, said Rob Oram of Franklinville, N.Y., a tournament angler sponsored by Bass Pro Shops and others.

He spends a lot of time on Lake Erie in New York, typically from Buffalo south to Dunkirk. And like everyone else, he generally focuses on the best known perching grounds.

“But very rarely do I go out and land right on them,” he said. “It seems you’ve got to spend some time to find that school of perch that’s going to keep me and whoever’s with me busy enough.

“And even then what we’re seeing with these perch is that they don’t like to sit still anymore. They’ll kind of be there, and you’ll catch fish for 15 or 20 minutes, maybe longer if it’s a real big, active school of fish. But then they start drifting off to the sides.”

So the best perching these days is more like hunting than anything, he said.

Joe Fonzi, a charter captain with Thumbs Up Guide Service and a sponsored tournament angler himself who operates on Erie as well as Lake Ontario, agreed.

He, too, starts every outing at familiar haunts. That’s often around rock piles and rock edges, simply because gobies – a favorite food of yellow perch – congregate there.

“Gobies almost always relate to rock. They don’t like to sit in the mud,” he noted.

But not every rock pile has gobies – and hence yellow perch – every time. Fonzi said fish that hammer the gobies in one spot will of necessity move to another pile to find fresh bait as needed.

So he often relies on his electronics – a fish finder – to hunt for perch, looking first for rock piles, then fish on those piles. They might be suspended just off the bottom or even hunkered right down in the mud, he said.

He finds them by zigzagging as slow as 2 miles per hour until his graph lights up.

Heavy rains inland will wash warm, if muddy, water into Erie and Ontario, he said. The wind typically carries that water in one direction or another.

He chases that mud and fishes there.

“Perch are very forgiving. They will bite in the most discolored of water,” Fonzi said.

Once on fish, Oram and Fonzi both use ttrolling motors with an anchor feature – it holds a boat in place — rather than an actual anchor to set up on and stay on fish. That allows for faster adjustments.

That’s especially important when, at a popular spot, they may find themselves surrounded by 50 to 70 other boats. They can maneuver around the competition to follow fish drifting one direction or the other.

“You can chase the fish now instead of waiting for that school to come to where your anchor is,” Orom said.

They both start perch fishing early in the year, as soon as the ice disappears and water temperatures hit even 36 degrees. That’s most often late March.

April, though, Orom said, usually offers the best action for both numbers and size of perch. They get some real jumbos then, especially during the afternoon hours on days when things warm up even a few degrees.

Orom usually begins his fishing at 55 feet down at all times of year. Then he adjusts as needed.

Both men agree emerald shiners are the best bait for spring. Perch, they said, will hit soft plastic lures, worms, fathead minnows, salted minnows and more later in the year, but in spring they prefer emeralds.

But beyond that, there are some subtle differences in how they fish.

Orom fishes with 12-pound test fluorocarbon and heavy weights, sinkers weighing one to one and a half ounces. He wants an outfit that drops fast and is strong enough to rip fish in.

“I like to flip them into the boat, get them off the hook, and hopefully there’s still enough minnow there that I can get it back into the water as fast as possible,” he said.

He ties two #2 jig hooks directly to his line. To those he attaches shiners, hooked through the eye and out the belly, so that they float sideways, with the hook point facing up. The lower bait rides almost right on the bottom.

He maintains constant tension on the line, lifting it every 10 to 15 seconds.

“Because a lot of the time, those fish will come up and inhale that bait and then they’ll sit there. And you don’t ever feel that bite, bite, bite,” he said.

Fonzi fishes with lighter gear. Perch aren’t line shy, he said, so he goes with 10-pound braid tipped with a 10-pound fluorocarbon leader. But to that he adds only ¼-ounce sinkers so that he can feel bites.

Most often, he vertically jigs with his baits looking very much like a drop shot rig, noting that “you make your money up and down.”

But he isn’t afraid to cast and retrieve to perch that are spread out either. That can actually draw a school toward the boat, he said.

“As long as you’re not ripping that fish you hook back, the other fish see that perch fighting and they think he’s on something. And they will come right up to the boat. All of a sudden, your graph is full of fish,” Fonzi said. “Then you fish up and down.”

But you’ve got to find yellow perch before you can catch them. And in Great Lakes waters, like Erie, that can be tough.

There’s just so much water, Orom said. That’s why he hunts hard and stays nimble.

“We spend more time looking for perch than fishing for them,” he said.

“But once we find them, it’s game over,” Fonzi added.

Lake Erie and the other Great Lakes certainly have the potential to give up giant yellow perch. 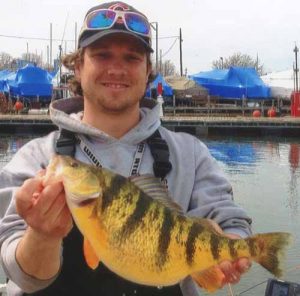 But so, too, do inland lakes. Record-size fish can and do come from anywhere.

As proof, here’s a look at the state record yellow perch for the eight states that touch one of the Great Lakes, as well as the records for several other states nearby for comparison.

Check this out, too: Tips to enjoy more success jigging walleyes