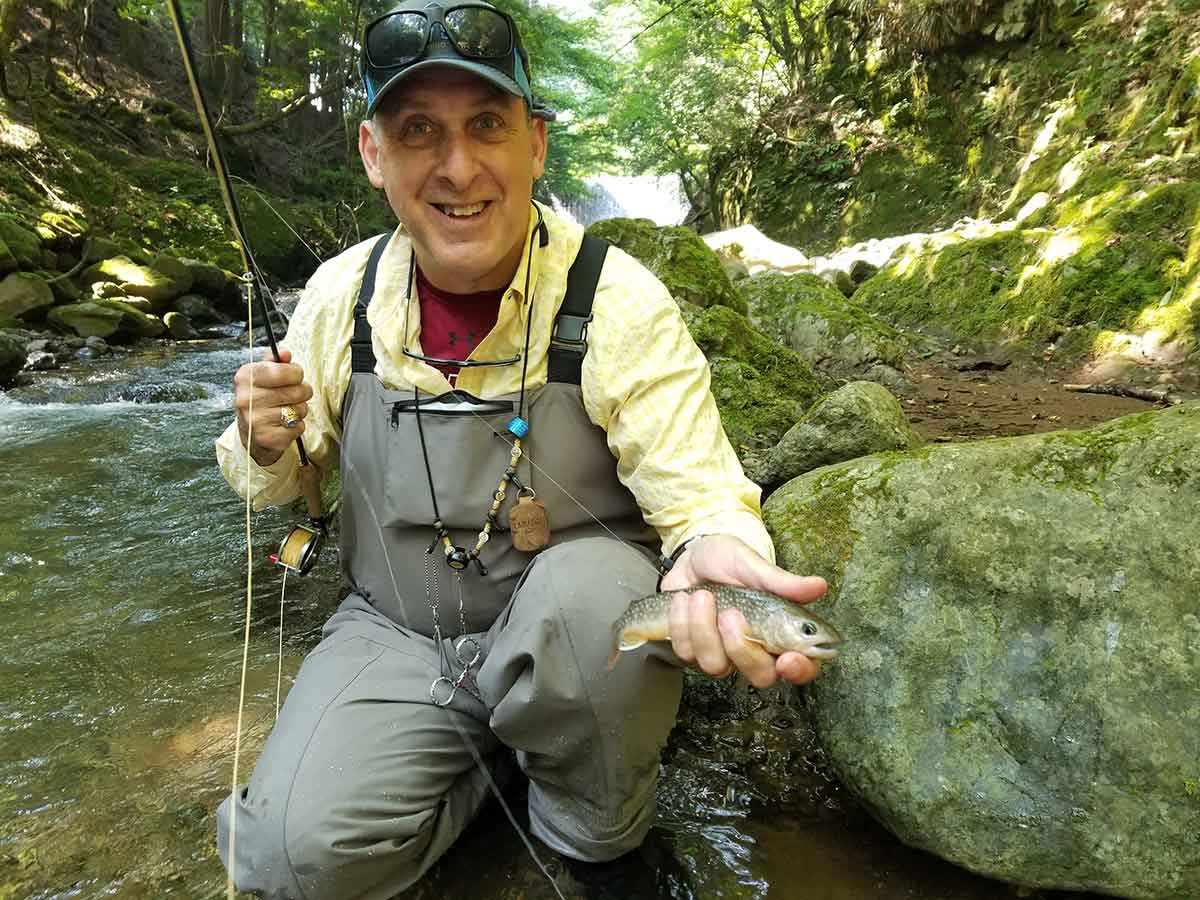 It was unusually spectacular in its familiarity.

This was August, and lush seasonal streamside vegetation made casting a fly an occasional challenge. Low water flows and high humidity were constant ones.

“We just worked our way upstream, picking apart all these little pockets, waterfalls, runs and pools, big boulders. It was a lot of humping,” said the Pennsylvania man.

But the fish cooperated.

“They weren’t huge. They were anywhere from 7 to 12 inches, these fish,” Hussar said. “But every pocket, every riffle, you’d get a bite. In fact, my first cast I got a bite.

Not quite. But he was certainly far from home. 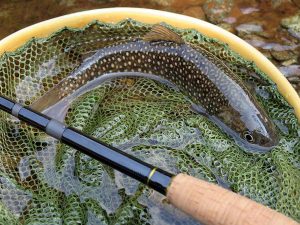 A look at an iwana in a net.
Photo courtesy Eric Hussar.

Hussar is no stranger to fishing or travel. He lives Lewisburg in Union County, in the heart of Pennsylvania’s limestone stream country, famous for its wild trout. There and on the road he fishes 80 or more days each year.

But this past summer he went further than ever before.

While visiting a daughter who teaches English in Japan, he made time to fish a stream high in the Tanzawa-Oyama mountain range 90 kilometers – that’s about 60 miles – west of Tokyo.

In some ways it was a “Toto, I have a feeling we’re not in Kansas anymore” moment.

And Hussar had lunch in a single family “lodge” where he replaced his shoes with slippers before going inside. What he ate exactly remains a mystery. But it tasted good and he got it down, despite never having used chopsticks before.

But the fishing was, well, fishing.

Japan’s mountain streams – at least these ones – aren’t destination waters in the truest sense. Fishing them isn’t like “going to New Zealand after a 30-inch brownie,” Hussar said.

But it was still exciting.

“Fishing is fishing. It’s universal,” Hussar said. “It was just being out there. Small fish, big fish, it doesn’t matter, at least to me. It was the experience.

“I think that’s what it is for everybody, though. It’s just getting out there and doing it.”

The two types of fish he caught — yamame and iwana – are trout species native to Japan. And they can get large, said Motohiro Ebisudani, or “”Ebi,” owner of Trout & King Fishing Tours and Hussar’s Tokyo-based guide.

Yamame go by the name of “cherry salmon” if and when they return to Japanese rivers to spawn after a couple of years in the sea. They typically stretch two feet long then, he said. 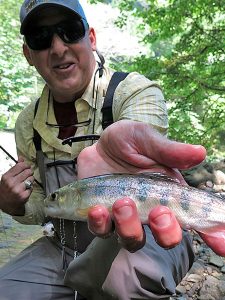 They’re popular with anglers, but hard to catch, similar to Pacific coast steelhead, he added.

Most of the yamame and iwana found high in the mountains are landlocked, said Ebisudani, who speaks relatively good is somewhat broken English. Local officials stock them for anglers, like trout in America. Most average about 10 inches and live their entire lives in one stream.

And they are popular among those who pursue them for sport and food.

“Also these fish are very beautiful,” Ebisudani said, noting that they resemble brook trout in coloration.

The guide – who not only shepherds visitors to his homeland, but takes Japanese anglers all over the world, including the United States – said Japan’s mountain streams are similar to the ones fishermen here know.

“Not like the Montana River or big rivers. American people say it similar to the east coast of America rivers,” Ebisudani said. “You have lots of small streams on East Coast of America. They say it a similar kind of river.”

Most Japanese locals who fish for yamame and iwana do so with spinning gear and lures, Ebisudani said. Younger people in particular find that an easier and faster path to success, he said.

But there is a well-established if smaller fly fishing tradition in the country. It includes Tenkara-style fishing.

Tenkara, in fact, originated in Japan. It involves using a long rod – Hussar’s was 11 feet long – and 15 to 17 feet of leader and tippet. There is no reel.

Instead, anglers hook fish on flies, then back the rod and line up until they net their quarry.

“On small water you’ve got to be stealthy,” Hussar said. “If you’re going to fish a pocket you’ve got to sneak up on it because you only have so much line, leader and tippet to cover the fish with.

“And it’s tough on big streams because if you hook a big fish, you have to run with it.”

There’s another reason Ebisudani generally recommends against some anglers trying it on Japanese mountain streams. Most have trees, brush and other vegetation growing thickly right up to the water’s edge, he said. Space is at a premium.

But Hussar caught fish on his Tenkara rod.

The key, Ebisudani said, there as here, is giving fish what they want.

“Mostly clients like to catch on dry flies, like mayfly or caddis or stonefly. Sometimes a beetle or ant,” Ebisudani said. “But more productive is nymphing.”

The mountains are a refuge.

“So many come to the mountains for fishing or hiking or mountain trekking every weekend. But it’s very quiet on weekdays,” Ebisudani said.

That’s when Hussar fished, on a Friday morning. It’s something he plans to do again on his next visit.

He wants to try fishing for salmon near Japan’s river mouths and even venture onto the sea, too. But he’ll also make a point of returning to the mountains.

“The fishery was awesome. And I hope they have it forever.” 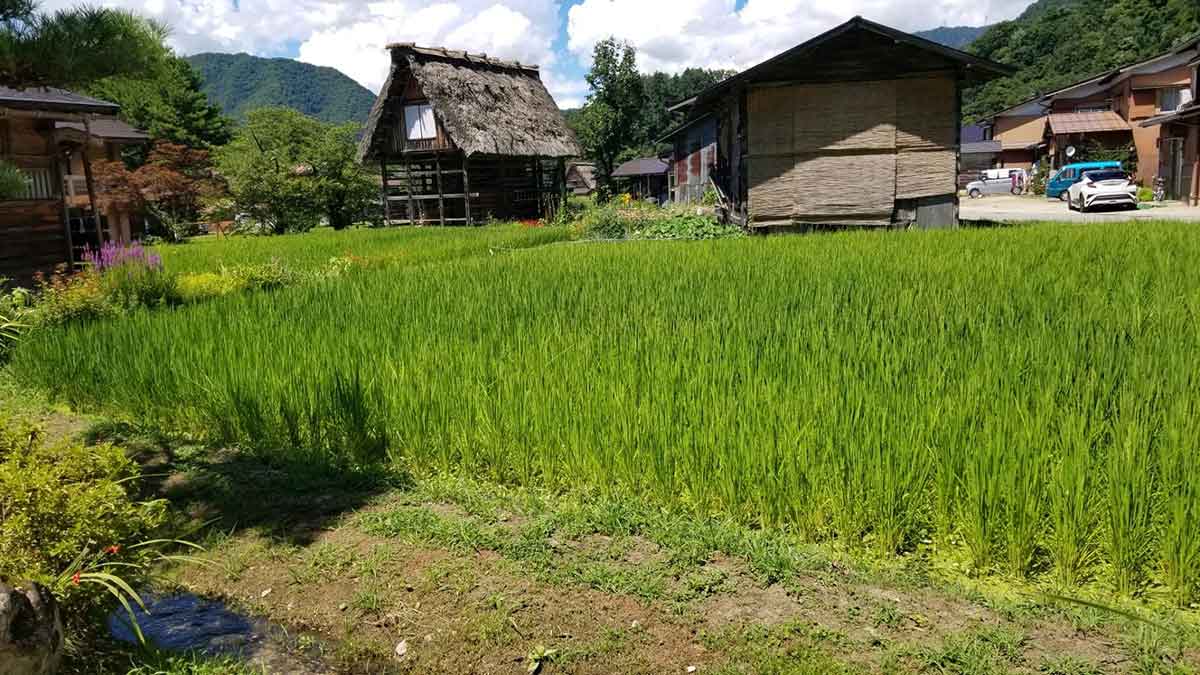 Visitors can expect to see tiny mountain villages when fly fishing in the mountains of Japan.
Photo courtesy Eric Hussar

Check this out now: Catching hybrid striped bass on the fly

And coming soon: Our annual holiday gift guide for anglers.