A look at fishing reels and more outdoor news

Do you have to have had ice before you can talk about ice-out fishing? That’s a riddle that mild winters like this one make you ponder. But by whatever name, the fishing available when winter ends and spring – which officially arrives on March 19 – begins can be good, especially if you hit the right spots. And that often means small ponds and bays on larger waters. Shallow, often with dark bottoms, sometimes marked by weeds and wood, they soak up the sun and warm up first. That draws out bug life and panfish like crappies and bluegills. Target them with tiny baits – 1/32- and 1/64-ounce jigs tipped with soft plastics or small live baits – to get in on the action. 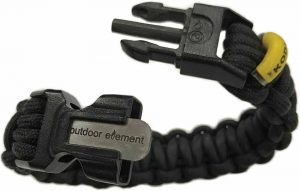 Product description: The Kodiak isn’t one survival tool; it’s several rolled into one, all conveniently located on your wrist. A paracord survival bracelet, it’s made from 8 to 10 feet of 550 paracord, that do-it-all rope of the outdoor world. But there’s a lot more to it. There’s a fishing hook braided into the cord, for starters, along with two strands of braided 20-pound fishing line. The buckle, meanwhile, has a ferro rod and hardened stainless steel striker for starting fires.

Available options: This is available in three colors, black, green and red.

Notable: What’s so special about paracord? Well, it’s rope initially used – as its name suggests – in parachutes. It’s so handy because of how it’s made and what it includes. Type III paracord like this can support 550 pounds of weight as is. Broken down – it’s a hollow nylon shell with smaller strands of line within the core – it can serve all sorts of other uses.

Sometimes, things become so common, so widespread, so accepted, that we take them for granted.

So it is with the fishing reel.

Rare is the angler who ventures onto the water without one these days. Sure, you may on occasion come across someone fishing with a cane pole, for fun, as a measure of simplicity or for other reasons of their own.

But reels are otherwise the norm.

That wasn’t always the case, though. In fact, widespread use of fishing reels is newer than some might imagine.

Some believe the first reels – originally called “winches” — were invented in 300 or 400 AD. But it wasn’t until the 1700s that anglers paid much attention to them at all.

Even then, adoption of reels was slow. A craftsman created a few “Kentucky reels,” a primitive baitcaster, in the mid-1800s for friends, but they never took off on a large scale.

No reels did, in fact, until the late 1880s. And reels didn’t become really widespread until the early days of the 20th century.

Fixed spool spinning reels debuted in the 1930s and spread across the United States starting in the years after World War II. The closed face spincast reel debuted in 1949, with the iconic Zebco 33 following in 1954.

Now, of course, reels are an industry unto themselves, with models ranging from those for children on up to professional level ones that cost more than the car your granddad once drove to the bait and tackle shop.

Progress comes with a price, after all.

Check this out, too: Choosing the right fishing line for the situation