Coyotes, millennials and other outdoor extras 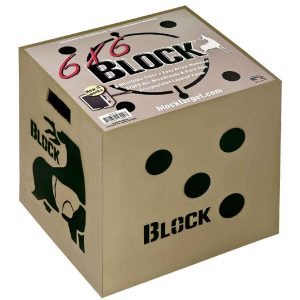 Product description: Practice is the key to getting good at anything. But that’s never more true than with archery. To be a responsible bowhunter takes time and commitment. Practice can be easy and fun, though, with the Block 6X6. You can shoot all six sides of the target, choosing from among different patterns – deer vitals to combinations of dots — to add some variety. Four of the sides handle broadheads as well as field points, while two are broadheads only. Best of all, this target is long lasting, capable of handling thousands of hits. At the same time, for as tough as it is, it’s pretty easy to pull arrows out of it. That makes it just plain fun to shoot.

Notable: Made in the United States, this target measures 18 by 18 by 16 inches. It weighs 19 pounds and comes with built in, recessed carry handles to make moving it easy.

Some people will tell you – ahem, the lady of this household – that there’s never a bad time to go shoe shopping. But there is a best time, at least if you’re in the market for hiking boots. That’s at the end of the day. Why? Because your feet tend to swell a bit over the course of a day’s walking. So trying on boots later rather than earlier helps you to avoid buying boots that are too small. Be sure, as well, to wear the same socks you plan to hike in, as well as any inserts you typically use. Then, if all goes well, you’ll find boots that are snug without being too tight and be ready to hike.

Millennials and coyotes? That’s not a link you think of every day.

Namely, both the canines and their human counterparts aren’t usually in any great rush to leave the family nest.

Eastern coyotes these days live not only in wild places, but in just about every major city, from Chicago to Pittsburgh to New York. Family size can vary pretty substantially.

But everywhere, they tend to stick together for a while.

“Packs” of coyotes usually include a monogamous pair of adults that do the breeding. Floating around them, though, like satellites, are typically not only the pups from that year’s breeding, but also 12-month-old or younger “teens” from their previous mating season, 6- to 18-month old transient subadults hooking up for a while on the way to establishing their own territory, and even young adults that have yet to find a mate.

No group typically stays together for long. Aside from the mating pair, other animals come and go, even from season to season.

So if you see a group of coyotes together, pay attention. They live a long time, potentially, up to 14 years in the wild.

But eventually some, sooner or later, will move out.

See also: Think outside the box when calling coyotes