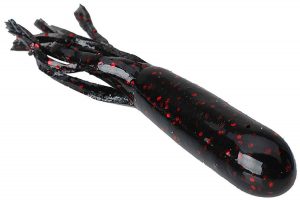 Technique: Paired with the Stupid Tube jig head in size 3/0 or 4/0 – they’re designed to work specifically together – this tube is meant to mimic baitfish or crawfish on the bottom. Rig it so that the hook points lies flat on the lure’s back, with as little of the eyelet exposed as necessary. Fish it around grass, weeds, rocks and timber. Everywhere, it’s supposed to allow anglers to “feel” the bottom as they bring it back, making it jump, dance and wiggle. Most bites are subtle, though, so be sure to watch your line to also see when a fish sucks your bait in.

Notable: There are two larger versions of the Stupid Tube available. There’s a 4.2-inch Flippin’ Stupid Tube and a 4.5-inch Big Dummy..

More is not always better. Ever heard that before? Sure you have, and it’s true in a lot of circumstances. Choosing binoculars is one. More magnification is not always better than less. Powerful binoculars – say, something larger than 10X – certainly allow you to zoom in on things. But they magnify any movement or shaking of your hands, too. So they’re great if mounted on a tripod or something, but otherwise hard to hold steady. Better if you’re hiking might be a small pair of binoculars, something in the range of 8X25. A good all-around binocular for watching wildlife, by comparison, might be an 8X42. Before buying any, though, think about how and where you’ll be using them. That will point you to the “right” pair.

According to the U.S. Fish and Wildlife Service, about one-third of all Americans ages 16 and older watch wildlife for fun. That’s 86 million people.

And of those, 45.1 million – first and foremost – watch birds. No other animal or class of animals comes close to generating such a following.

That’s all good for the economy.

Bird watchers travel to observe wildlife, plant vegetation specifically to attract it around home, feed it and photograph it. And they spend to do it.

Over the course of a year, wildlife watchers – again, led by birders — spend in the neighborhood of $75.9 billion annually on everything from binoculars to bird feed.

What’s more, those numbers are growing.

Research from the Wild Bird Feeding Research Foundation shows the rate of bird feeding among Americans grew consistently from 2013 onward.