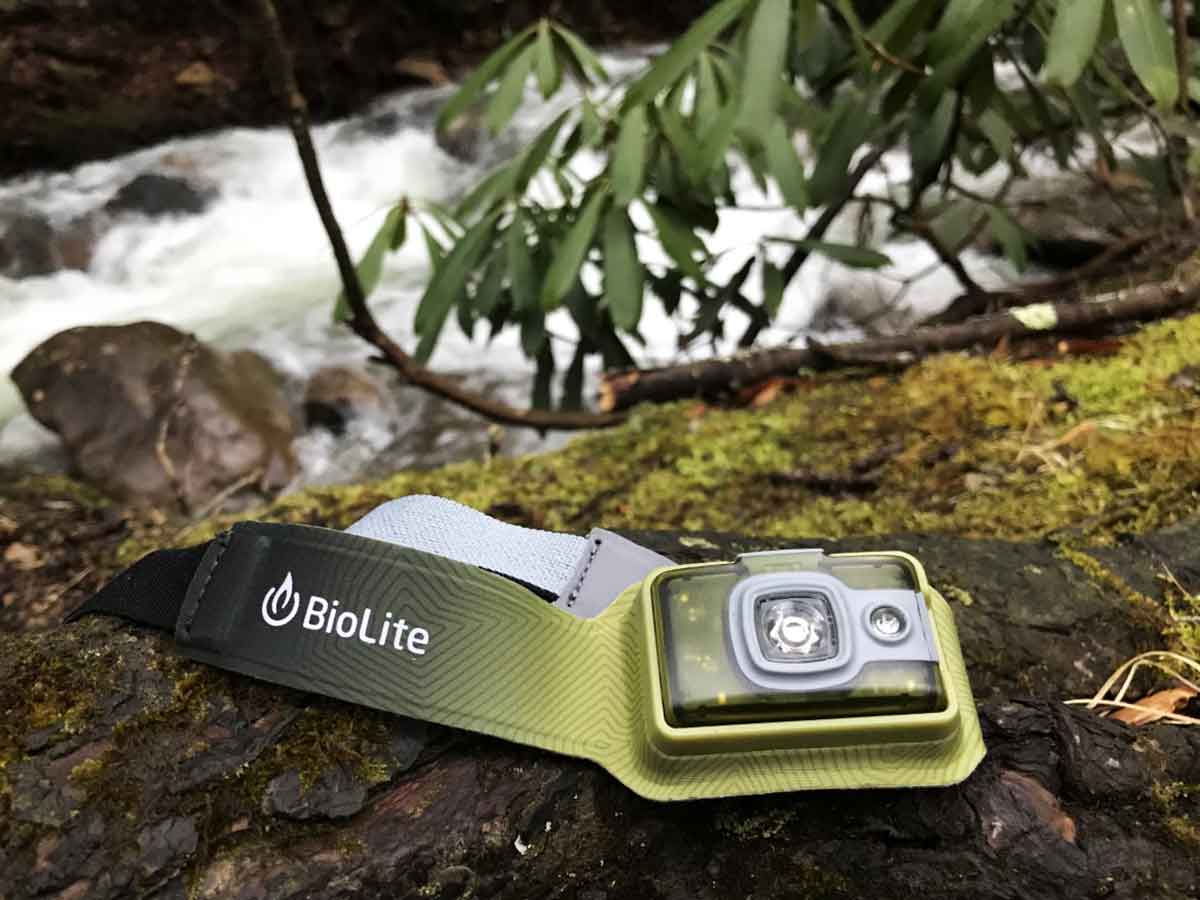 If you enjoy channeling your inner coal miner when roaming woods and trails in the dark, move along.

This isn’t the headlamp for you.

But if seeing well enough to cook dinner, set up your tent or walk to your tree stand without tripping over rocks and roots are the priorities, well, that’s another story.

BioLite – the company perhaps best known for the camp stove that doubles as a charging device – entered the lighting market last year with the release of its HeadLamp 330. It was notable for several features.

Unlike the clunky old miner-like headlamps of days gone by, it has a nearly flush-mount light on front. More notably, its battery pack rides on the back of the strap, behind your head. That’s touted as a “no bounce” feature,” meaning the light doesn’t bob when you’re walking.

Not surprisingly, the HeadLamp 330 – which is still available — received consistently good reviews.

But this year, BioLite took things even a step further. It just released the HeadLamp 200.

It’s not quite as bright as its predecessor, producing a maximum of 200 lumens as opposed to 330. Yet it retains some of its best features.

And it’s lighter still. With no battery pack at all – you charge it via its USB port — it checks in at less than 1.8 ounces.

I spent the last two months testing one out and found a lot to like.

That starts with the light output, the most important thing on any lamp. The HeadLamp 200 offers four lighting modes: a steady red flood light, a steady white spot light, and strobe options in both colors.

I didn’t use the strobes much – ever really — and frankly am not sure when I would. The white strobe in particular is pretty disorienting.

Perhaps in an emergency either might serve as attention getter.

But the two steady light options were very nice.

At its brightest, the HeadLamp 200 will burn for about three hours. Dim it by holding the turn-on button – it blinks when it’s as high or low as it will go – and you can stretch it to 40 hours of use without recharging, though.

And typically, I didn’t shine either the red flood or the white spotlight at full power for very long.

At its brightest, the red flood light is said to project light for 26 feet. I used that at about half power for walking into a pre-dawn deer stand and it was bright enough to avoid getting slapped in the face by limbs.

The white spot light is said to shine out to 164 feet at its brightest. But I most often used it on its lower settings, too, when camping. It was bright enough that way without blowing my night vision completely.

The light pivots, too, so that you can shine it straight forward or more toward the ground.
Just be advised that making adjustments — switching light modes, dimming or brightening the lamp or changing direction of the beam – are bare hands operations.

BioLite says the headlamp can be adjusted while wearing gloves, and that’s true, to a point. I was able to work the button with the thin gloves I wear on chilly fall mornings. I couldn’t with a pair of heavy winter gloves.

Still, all things considered, that’s not much of a hindrance.

The other thing the HeadLamp 200 really has going for it is how comfortable it is to wear.

Technically speaking, the band itself is a moisture wicking material that pulls sweat away. Two sliding clips allow for quick size adjustments, while a reflective stripe in the back makes you visible to those behind you, a good feature if you wear this running.

The HeadLamp 200 wears like a headband. You put it on and largely forget about it. Because it weighs so little, you aren’t constantly fiddling around trying to keep the light in place, only to ultimately wind up with a tell-tale red pressure mark on your forehead.

You just put it on and go.

The HeadLamp 200 – which sells for $44.95, USB cord included — has some other nice features. It has a “brightness memory” that automatically powers it to your most common setting, unless you change it. There’s a lock mode, too, so that it doesn’t accidentally come on while in a pack or pocket.

And charging the light is fairly quick. The company says it can go from zero to full in about 2.5 hours. I found that to be pretty accurate.

All in all, the HeadLamp 200 is a pretty good tool. It performed reliably, wore comfortably and established itself as something I’d carry often.

And in the end, that’s what gear is supposed to do, make our adventures carefree and fun, right?

Check this out, too: Outdoor gear storage solutions for home, garage